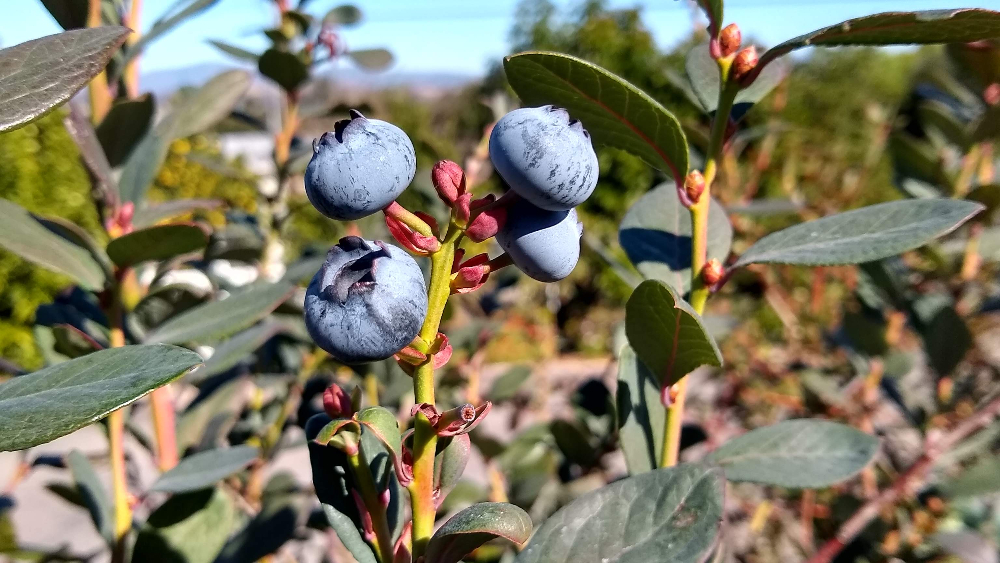 My wife is from Oregon, where blueberries can really grow. On our visits up there I see how fast and large blueberry bushes can grow and how productive they can be. While my blueberry bushes here in Southern California are inferior to those in the Pacific Northwest, they do provide my three children with all of the blueberries they can eat.

They also grow and produce better today than when I first started growing them more than a decade ago.

This post is about how I’ve found success growing blueberries, as well as how I’ve seen others grow them well in Southern California.

As you’ll read any time you read anything about blueberries, they need soil with a low pH, around 5 according to this University of California publication. We don’t have such soil in Southern California. In the two different gardens I’ve tested my unadulterated soil, they have registered about 7.

Growing blueberries in a pot is simpler than growing in the ground. All you do is plant a blueberry in a pot that is filled with a purchased mix that is in the acid pH range. Many companies make these mixes for growing azaleas and camellias, for example. Here is one called “Azalea, Camellia, and Acid” from E.B. Stone that you can probably find at your local nursery.

I have seen a number of mature, fruitful blueberry plants growing in mixes like this. I also know someone with excellent blueberry plants who makes her own blend of peat moss, bark chips, and an azalea mix.

On the other hand, I have always grown my blueberries in the ground. Some say this isn’t possible. I’ve heard many people say blueberries won’t do well long-term in Southern California in the ground. But I know that there are commercial growers doing it, and I have seen a number of blueberry plants in the ground in yards doing well after 15 years or more. My oldest plants have been in the ground for about 12 years.

There is no doubt, however, that growing blueberries in the ground in Southern California requires more effort in terms of getting the soil right.

I currently have eight blueberry plants, and I’ve taken different approaches to modifying the soil for each of them. I have a sense of what works and what doesn’t.

First, what doesn’t work is hoping that acidic mulches will be sufficient. I continuously added acidic items to the soil surface around some plants such as oak leaves, pine needles, coffee grounds, and lots of extra rainwater (which has a lower pH than the imported tap water of Southern California — about 5.6 compared to about 8.4 for my particular water district). Yet my plants still began to show chlorosis (leaves with yellowing between the veins), a sign that the pH of the soil is too high for the plants’ roots to take in iron.

I also tried merely mixing a lot of peat moss into the planting hole of some plants, as peat moss is acidic. Those plants eventually turned chlorotic too.

Now for what does work. I have found two ways to successfully green up my chlorotic blueberry plants. One is by adding aluminum sulfate.

After adding some of that, my plants greened up very quickly. However, I was uncomfortable adding that to my soil so I only did it one time on a few plants — this was back in 2016 — and then I disposed of the product.

For another set of plants I added sulfur pellets.

The sulfur took longer to green up the chlorotic plants, but it was effective and it then became my chosen method. Every year, I continue to add a little bit of sulfur around my blueberry plants and I haven’t seen any chlorosis on them since I started. I also have a gardener friend who grows excellent blueberries in the ground, and she has only used sulfur pellets to reduce and maintain a low pH in her soil.

In addition to the sulfur, I continue to add compost (homemade), wood chips for mulch, and coffee grounds. It is said that if soil is high in organic matter, then blueberry plants will tolerate a pH somewhat higher than the “required” level of 5.5. (See this presentation by University of California farm advisor Mark Gaskell on soil pH management for growing blueberries in the ground.)

Because blueberries don’t grow wild in hot and sunny places like Southern California, some people assume the plants will appreciate some shade. I tested this out in my yard once.

I bought a few young plants and put some in full sun and some in afternoon shade at the eastern canopy edge of a large orange tree. After a couple years I saw that although the foliage of the plants in the afternoon shade looked better, they produced fewer berries.

I should note that my yard is located about twenty miles from the ocean and at about 1,500 feet elevation in Ramona, San Diego County. The summer sun is intense here.

Nevertheless, planting my blueberries in full sun has given the most berries. All I have to do is water enough.

I have watered my blueberries with a watering can, micro-sprayers, and drip irrigation with fine results.

I switched to micro-sprayers for a few years and the plants seemed to like the broader water distribution more than when they were on drip, but I recently returned to drip in order to conserve water and because the micro-sprayers were clogging and spraying inconsistently whenever there was a slight pressure change in the water line.

Whatever watering method, the main thing is to water sufficiently. I have my blueberries on the same station as my vegetables. If the vegetables are getting enough water, then the blueberries are too.

I grow a handful of varieties: Misty, O’Neal, Jewel, Jubilee, Emerald, Pink Lemonade, and Sunshine Blue. All of them make very similar blue berries except for Pink Lemonade, whose berries are pink.

The Pink Lemonade plant is different from the others too. It is the most vigorous grower, and it is the latest variety. After the harvest of all of the blue varieties is finished, we continue eating Pink Lemonade into August.

The earliest variety is Sunshine Blue. This variety also has been the most tolerant of my mistreatment and experiments with it in general. It has always had the least chlorosis and grown better than the others before I got the soil right.

We start eating some Sunshine Blue blueberries in March and then the other varieties come in until a peak in harvest happens around May, waning from there into summer until the last Pink Lemonades are picked around August.

With eight bushes you might think that we’re swimming in blueberries, but no. We have three kids who feast on them constantly, and it’s rare to see many blue, ripe berries on the bushes, and my wife and I still don’t get to eat as many as we’d like. We probably need more like ten bushes, which would be two per person.

This takes into account a bit of loss from birds. At my place, it’s the mockingbirds and scrub jays who help themselves to our blueberries. Some years I just share; other years I get possessive and place a simple net of tulle fabric over the bushes held down by some rocks.

This is “Economy Colored Polyester Tulle” from Paper Mart, a company based in Orange, California.

Here’s a video showing some of my blueberry plants and summarizing how I take care of them: