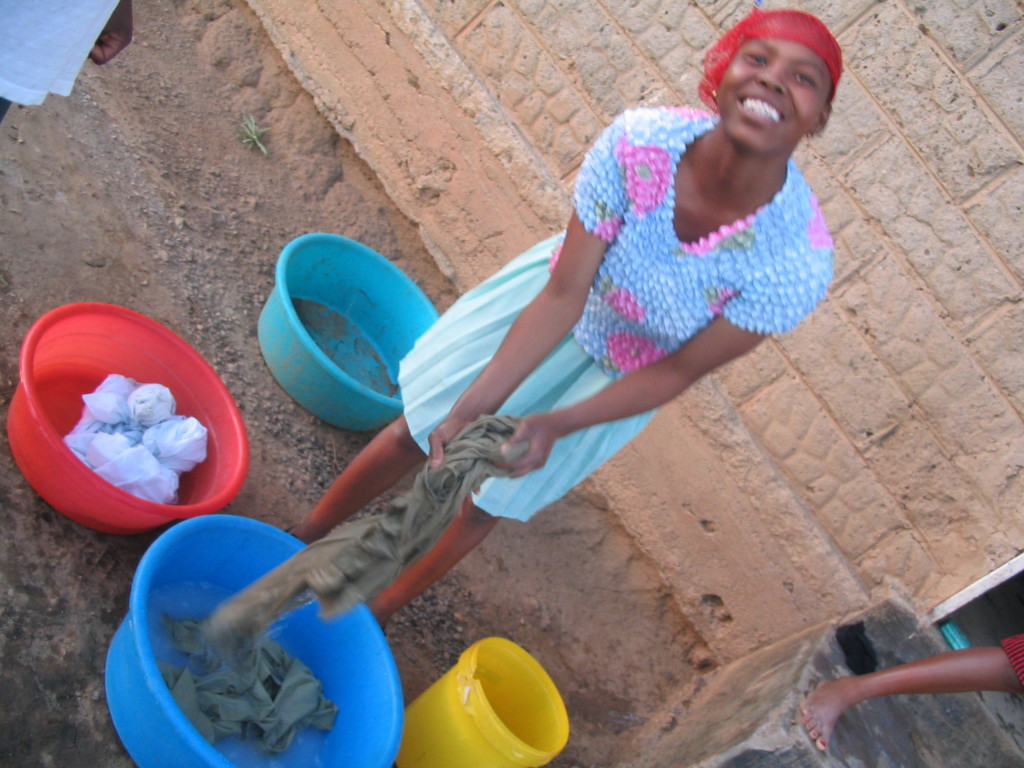 This is Puleng, one of my former students in Lesotho. I learned to wash by hand from her and other students at Ngoana Jesu Secondary School, and I also learned from them to reuse my laundry water on my vegetable plots. I adopted that practice in Lesotho, and I’ve been trying to adapt it to my new context in Southern California.

Here I use a machine to do the washing, and I reuse the laundry water by directing it through a hose to a Chinese pistache tree. 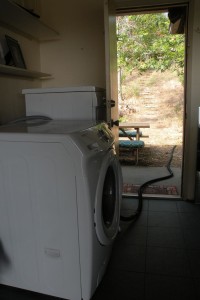 But in getting from the Lesotho method to this California method, I made a few mistakes along the way.

When we moved into our house  — almost two years ago, now — I disconnected the hose behind the washer so that instead of emptying into the sewer line I could empty it into a trash can. I then used a bucket to distribute that water to our burgeoning vegetable garden. It took a lot of time to distribute that water, however. The washing machine used more than three times as much (each load used between 15 and 30 gallons whereas in Lesotho each load used between 4 and 7 gallons).

So last spring I bought an extension for the machine’s plastic hose. I planted tomatoes, squashes, and melons in four groups along the driveway, fairly close to the washing machine, and I placed the end of the hose near one of the groups of plants each time we did a load. The plan was to water all of those plants with laundry water alone. Then the plants started dying. The young squash plants started showing symptoms first. The margins of their leaves looked burnt, and the plants grew very slowly in general. Next the tomatoes demonstrated toxicity. They screamed toxicity! Their leaves yellowed, purpled, curled, they stopped setting fruit, and so I yanked them out of the ground.

We had already switched to using the least toxic detergent we could find (Ecos brand), so then we cut back on the amount of that detergent we were using. It was all too late. The soil had been spoiled and the plants were goners.

In Lesotho, I often dumped the wash water in the bushes and only the rinse water on my vegetable plots. Yet here in California I was dumping both, so it added potentially harmful chemicals in higher concentrations. But more than that, I hadn’t used as much detergent in Lesotho in the first place. When washing by hand, you see how soiled each article of clothing is and you only apply as much detergent as is absolutely necessary. Having to work with your hands in such a detergent solution encourages you to use as little as possible because the skin on your fingers and palms get tight and painful if you use a lot. Now using the machine, we were just unthinkingly following the recommendation of the detergent manufacturer (“fill to this line”) and thereby adding much more detergent than we had while washing by hand in Lesotho — this even though the Ecos brand ingredients were much less toxic than the ingredients of the Surf brand that we used in Lesotho.

Another difference that occurred to me was that in Lesotho it rained all summer. There were thunderstorms which consistently leached the laundry water through the soil profile. In addition to that, when the rains failed, I watered my vegetables with collected rain off my roof and the school buildings’ roofs, as well as groundwater from a borehole pump. Yet here I was in California giving my vegetables a steady diet of nothing but laundry water.

Therefore, we come to our current method of reusing laundry water in the yard in Southern California.

For almost a year now, I have experienced excellent results by connecting a short extension hose (15 feet long) to the washing machine and snaking it under the Chinese pistache tree behind the garage. This tree receives additional rainwater all winter from the runoff from the nearby concrete porch as well as two roof downspouts, and thus the soil gets a leaching similar to what my Lesotho soil received. We place the hose near the spots where the porch and downspouts concentrate their rain runoff. 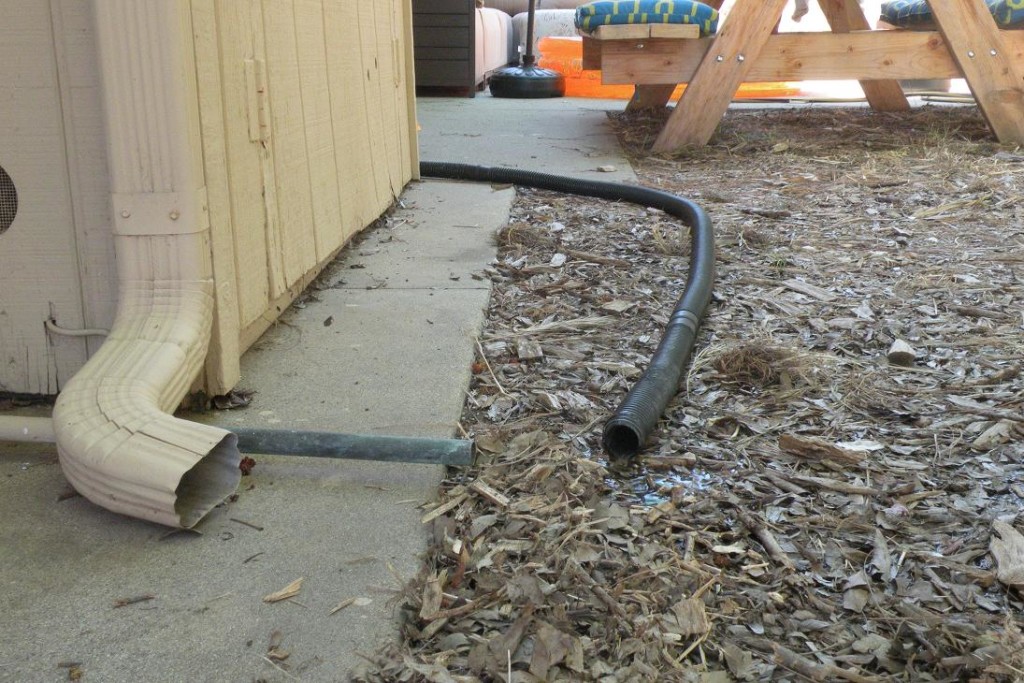 Whatever chemicals build up over the summer from laundry water (sodium is the particular chemical in Ecos detergent that I’m worried about) will be leached by the rinsing of clean rainwater through the winter. That’s the theory, anyway. So far it seems to be working out based on the fine appearance and new growth of the tree. 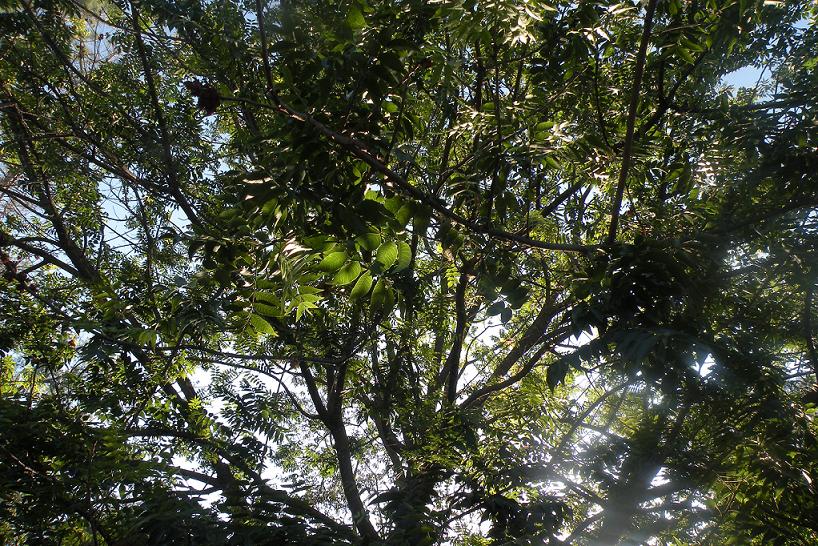 After we’ve finished with each laundry load, we hang the hose extension on the wall so it drains completely. This ensures that there is never any bad smell — for even a little laundry water sitting in a pipe will start to stink. 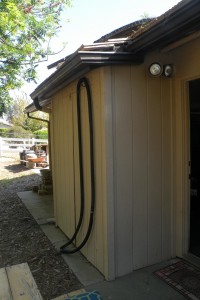 Why haven’t I installed permanent piping to direct the laundry water to the pistache tree? Seems like that would save the time of having to connect the flexible hose before each load and then having to hang it back up afterward. True, it would save that time, but that time adds up to literally five seconds. The task is so quick and not annoying that we don’t even think about it anymore.

But more importantly, there is only a single inch of fall between the level of the concrete porch and the soil surface beneath the pistache tree. Therefore, pipes would have to open into holes dug deep enough such that the pipes are sloped enough to drain completely. These holes would need to be maintained so they don’t clog the pipe outlets.

The permanent system would save the few seconds we spend connecting and disconnecting the flexible hose at the expense of the time and resources it would take to install (cut concrete, buy and lay pipe, dig outlet holes, etc.) plus maintain. As for now, the flexible hose method requires zero maintenance, has no chance of becoming clogged, and yet remains adaptable to additional plantings we might make in that part of the yard in the future.

Seven years later here, we continue with exactly the same routine and the Chinese pistache tree continues to grow wonderfully. Here it was ablaze in fall colors two years ago: