On the eve of the winter solstice, December 20, I got to thinking about how warm it had been. We still hadn’t had anything near a frosty morning.

The winter before (2013-2014) we had some chilly nights in late November and our coldest spell of the whole winter occurred during the early to middle part of December. I compared the accumulated chilling hours (below 45 degrees) for this 2014-2015 winter season with previous years and sure enough, it was only about half the usual: 153 compared to 299 in 2013-2014 and an average of about 250 by December 20 in other years. It was the warmest start to a chilling season of the past 15 years.

Then the morning after Christmas, frost. Two days after that, frost again. December 29, frost. New Year’s Eve day made the record books as the “lowest maximum temperature” ever for our area (Ramona airport) at 47 degrees. New Year’s morning, frost — the most widespread I’d ever seen in the yard. Welcome to 2015. 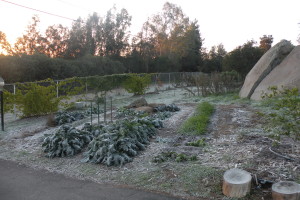 The low temperature at the Ramona airport that morning was 25 degrees, one degree above the record low. The temperature sensor under the eaves of my porch bottomed out at 30 degrees. (The porch’s shelter keeps it a couple degrees higher, but we’re slightly uphill from the airport, keeping us slightly warmer as well.)

January 2 was a low of 30 degrees on my porch again, and there was frost all over. January 3, frost. January 4, frost. I expect it every morning now, I wrote in my notes. Where do I live?

In the end, between December 26 and January 4 there was frost on seven of the ten mornings. What a spell!