It’s January 2016, and according to plan, we’ve got a new rain tank for the new year. 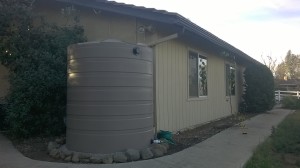 Our idea has been to install one new tank each year and make improvements wherever possible regarding the size, location, and distribution of the collected rainwater.

We got some things right with the first tank we put in last year, and so have imitated those aspects. They include the tank size, base, and location. This second tank is sized to handle just under four inches of rainfall on its section of roof (865 gallons of capacity for 552 square feet). This tank rests on a slightly raised base of gravel. And the tank is located where it can gravity-feed trees nearby, that is, the tank is close to a number of trees and it is above them in elevation.

There’s really only one thing that I tried with the first tank but abandoned, and that is distributing the water through driplines to nearby avocado trees. The primary benefit of applying rainwater to avocado trees is to leach the salts in the soil. However, water applied through drip emitters is ineffective at this because the water forms a chimney that dives mostly straight down but doesn’t spread laterally very much, thereby not leaching outside of the vertical chimney below the emitter. This is how it goes in my sandy loam soil anyway. So, I’ve learned to distribute the rainwater to avocado trees through a rain wand at the end of a hose, manually. It’s time-consuming, but at least it’s highly effective at distributing the water across the entire root zone of the tree.

On the other side of that coin, I have learned that I can effectively distribute the rainwater from the tank through driplines to most every other plant, vegetables, deciduous, and citrus trees included.

This is why I’ve set up the new rain tank the way I eventually set up the first rain tank: It has two connections where one goes to a hose with a rain wand for the avocados and the other goes to a dripline for vegetables and other fruit trees. Using non-pressure compensating drip emitters allows the rainwater from the tank to be distributed throughout those driplines by gravity alone.

And finally we’re predicted to get some rain! I installed the new tank in December, actually, but that was a dry month. We only got 1.2 inches. Now meteorologists are getting excited by a change in weather patterns. As the California Weather Blog mentions, there is a stream of significant storms finally aimed straight at Southern California. As I write, the first sprinkles are falling. The latest forecast shows precipitation every day for the next five days. The National Weather Service predicts we will have received between two and three inches of rain by the end of the week. The new tank will hold that just fine.