I just picked up our new rain tank from the Bushman factory, and I chose to size it like our first one because that one worked very well last year. (I suppose I got lucky in sizing that first one.) In other words, I chose a size that would hold between three and four inches of rainfall from its particular section of our roof.

Here are the numbers for our first tank, and then I’ll give the parallel numbers for our new one: The first one collects from a 363-square foot section of roof. Four inches of rain on that area equals 872 gallons (363 x 4 x 0.623), but the roof is made of cement tile, and that surface absorbs some of the rain. Some people estimate cement tile to shed 65% of the rain that falls on it. My experience has shown that to be about right. So, four inches of rain on 363 square feet of cement tile roof sheds 567 gallons. Our tank has a capacity of 530 gallons — almost enough to hold that four inches worth of rain.

As for our second tank, it will collect from a 552-square foot section of roof. On this area, a four-inch rain would amount to 1,376 gallons but would shed 894 gallons. The second tank has a capacity of 865 gallons. 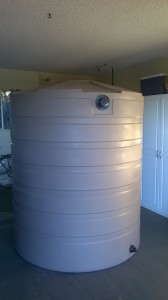 Bushman 865-gallon, waiting to be installed.

Why has the first tank — with a capacity to hold between three and four inches of rainfall — worked well? It has to do with how much rain we get and when we get it. Our average annual rainfall is 16 inches, but the wettest three months are what’s important. In January, February, and March, we average around 3.5 inches of rain each month. You might think the tank would fill up by the end of January and then just overflow all February and March; however, what usually happens is that we get a dry spell, often accompanied by warm Santa Ana winds, between the rain storms. Sometimes the dry spell lasts three or four weeks, even in these wettest months. And during these dry spells the collected rain in the tank gets used, at least in part, such that there’s room to collect more rain when the next storm comes.

For example, last winter (2014-2015) the 530-gallon tank was nearly at full capacity after a relatively wet December but then got depleted during a relatively dry January.

Our rain does occasionally come in the form of a four-inch downpour though, or a back-to-back couple of weeks of rainstorms in February that leave us with many inches at once. Here the tank is going to overflow. But this will happen rarely and momentarily. We’ve had one such single downpour in the past two years (February 2014) and no back-to-back rainstorms (though I expect some during this El Nino winter). True, if the tank were bigger it would be able to handle these rare deluges, but it would also rarely use its capacity, and that to me seems a larger waste.

A capacity of between three and four inches is big enough to rarely overflow yet small enough to have little empty space through the normal wet winter months.