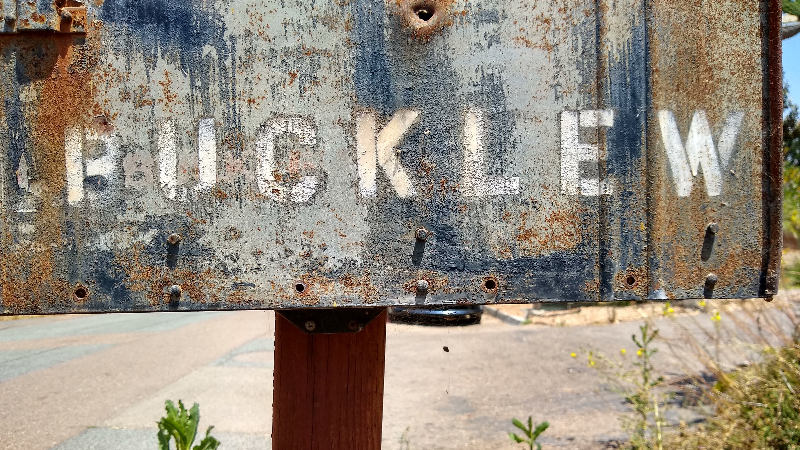 Captain L. L. Bucklew began planting mango trees in Encinitas, San Diego County, before World War II. By 1956, he was up to 172 trees. Bucklew’s grove was the first commercial planting of mangos in California, and today, fourteen of these historic trees are still growing and fruiting. I visited them a couple of weeks ago.

Their bark is cleaved and furrowed as you’d expect on 80-year-old trees, but if you’ve seen mango trees in the tropics then you’d be surprised that they’re not 40 feet tall. Some are around 25 feet tall while a few are not much higher than a basketball rim.

California mango trees do not ever grow to make massive outdoor living rooms as they do closer to the equator. But surprisingly, Captain Bucklew’s trees are not all bigger than some younger mango trees I’ve seen in the state – even though they are California’s oldest living mangos, as far as I know. The trees have had variable care after Bucklew died in 1982.

Who was Captain Bucklew?

Bucklew was sent to the military action in Cuba and then the Philippines. And in these two countries he got his first taste of mangos. Having learned Spanish while in those countries, Bucklew was then hired by the U.S. Department of Commerce to explore opportunities for the lumber industry in Central and South America. He spent 18 months working throughout that region, and was there exposed to yet more mangos.

Bucklew returned to his home state of Missouri about 1915 and was soon asked to organize men for an impending U.S. entrance into a war that was already underway in Europe. Bucklew organized the 128th United States Field Artillery. So he was an Army Captain, and for the rest of his life he was known as Captain, Captain Bucklew, or Buck to some of his peers.

Nearby in Missouri was the adjoining 129th Field Artillery regiment, in which belonged future president Harry S. Truman.

Bucklew and Truman got to know each other as they fought side by side in Europe during World War I. Beyond the war, they kept in touch for the rest of their lives.

In an interview given much later, Bucklew recalled a visit to Truman in the White House: When he entered the presidential office, Truman called out, “Fellows, we have a Republican with us today. We’ll give him hell.” Bucklew and Truman then shared drinks from a bottle of scotch. The aides that surrounded them referred to Truman as “Mr. President” and Bucklew could see that this irritated Truman, who eventually said to Bucklew, “I can’t be myself around here.”

Bucklew had gone in a different direction with his life after the Great War. Rather than into politics like Truman (who was president from 1945 to 1953), Bucklew went out to California “just to make a living and not try to get rich . . .”

Captain Bucklew arrived in California in 1933. He became a member of the California Avocado Society (then called the California Avocado Association), and in the Society’s 1940 Yearbook he reported on his mango plantings — which began in 1936 — in an article titled, “Mango Trials.” Bucklew’s property in Encinitas was just up the hill from the ocean, about a mile and a half from the water, on a west-facing slope. It was ten acres that were free from frost.

Bucklew had first checked out the few individual mango trees that had been planted around San Diego County before planting his and concluded “it was worth while to make a commercial [mango] planting.”

By 1940, he had 150 trees growing. Some were grafted trees while many others were seedlings. The varieties Bucklew had going included Haden, Cambodiana, Sandersha, Bombay, Gordon, Florida Apple, Johnson, Brooks Late, Caraboa, Filipino, and Manila. He had brought them in from all over the globe: Jamaica, India, Mexico, Florida, Honduras, Hawaii, etc.

Captain Bucklew began receiving assistance in his mango endeavors by pioneers of tropical and subtropical fruit exploration such as David Fairchild of Florida and Wilson Popenoe of California.

Again in 1956, Bucklew reported on his grove in the California Avocado Society Yearbook of that year in an article titled, “The Mango in California.” At that point, he had been growing mangos on his coastal Southern California property for two decades so it had become clear whether his climate and soil were suitable, as well as which varieties were suitable.

While his deep sandy soil grew the trees well, and he found no challenges with irrigation, fertilization, pest or disease control, Bucklew discovered that the proximity to the cool ocean kept his climate too mild. Only in warmer-than-normal springs did the trees get ample fruit set.

And though he was trialling 32 varieties, “some varieties mature very slowly, or not at all,” he wrote. Their fruit grew so slowly without the required heat that they were barely ready to pick in December when the nights had cooled down or they never completely matured before winter arrived.

Bucklew realized that he needed “early” varieties. He sought varieties that matured in April and May in tropical locations. He found one such variety from Florida called “Earlygold” and it showed great promise in his grove, maturing its fruit in November. Earlygold was also a high quality mango to eat with yellow skin, excellent flavor, and very little fiber.

A decade later, a group from the California Avocado Society toured Captain Bucklew’s property and tasted his Earlygold mangos, which by then he had settled on as the best variety for his location. (As reported in the 1966 C.A.S. Yearbook, page 17.)

When I visited Captain Bucklew’s property over a half century after this, I found more Earlygold mango trees remaining than any other variety. Through the years, Bucklew had grafted over many of his other varieties to Earlygold.

Also in the 1956 report, Bucklew passed on that he had had more success growing trees from seed compared to transplanting large seedlings or grafted trees brought in from out of state. Scions “develop well on locally grown seedlings,” he wrote. (Bucklew used mostly Manila type seeds for rootstocks.)

Captain Bucklew’s advice was sought out and appreciated as he had “made a more thorough study and field trial of mango than anyone in California” at this point in time, wrote Wells Miller in the California Avocado Society Yearbook of 1961.

By the way, if you ask around today you’ll find that many experienced backyard mango growers in California still affirm Bucklew’s view that mangos here usually grow better if planted as seeds or small seedlings and then allowing the seedlings to fruit or grafting them to a desired variety only once they are established. This is opposed to planting grafted mango trees. The difficulty of planting grafted mango trees is that they immediately try to flower and make fruit rather than grow a framework of branches first (as seedlings do).

When I toured what is left of Captain Bucklew’s mangos I was accompanied by his great grandson, Joseph Weber. Weber told me that “granddad” never made a lot of money from selling mangos and his second wife encouraged him to replace any sickly mango tree with an avocado.

Mangos are thought to have originated in or near India, and among those locals who bought mangos from Bucklew were immigrants from India. A couple miles from the grove in Encinitas is a Self-Realization Fellowship center on the bluff overlooking the Pacific Ocean, below which breaks a righthand surfing wave called Swami’s. It is named after the founder of the center, Paramahansa Yogananda.

Bucklew kept notecards about all of his trees, and one of the cards reads that in 1943 he planted a seedling given to him by “the Swami.” The tree grew and was later grafted to a variety called Florigon.

“The Swami’s mango tree” is still alive and making Florigon fruit today. It is the only tree for which the family has made a sign.

Weber told me that recently he brought a handful of mangos from the Swami’s tree to the SRF center and shared them with the staff, along with the story about the tree. They hadn’t known about it and were greatly impressed.

Captain Bucklew died at the age of 102, and what remained of his Encinitas property was passed on to descendants. All but one parcel has been sold off and developed. The parcel upon which Bucklew built himself an adobe house, however, was given to Joseph Weber’s mother (Bucklew’s granddaughter), who then passed it on to Weber.

As a kid, Weber lived in Chula Vista but spent weekends with his great grandfather at the farm. Weber’s mother later ran a nursery on the property. They knew the land and the trees and cared about them. More than mangos and avocados, Captain Bucklew had been an early grower of litchis and macadamias too.

Weber and his wife now live in the adobe house that his great grandfather built. And he cares for the remaining mango trees that granddad Captain Bucklew planted before most of us were born. As they stand, the remaining varieties are Earlygold, Florigon, Saigon, Macpherson (which was developed by Bucklew), Julie, Zill, Jonathan, and a few unknown.

In this video I walk among Captain Bucklew’s mango trees:

If you’re interested in growing mangos yourself in Southern California, check out this discussion on the Tropical Fruit Forum. Also watch a recent presentation on the topic for the California Rare Fruit Growers, Orange County chapter.

I’m able to spend time writing posts like this one about Captain Bucklew’s mango trees because of the kind support of readers like you. See how you can say thanks and keep the Yard Posts coming HERE