Caring for your Southern California garden during a heat wave 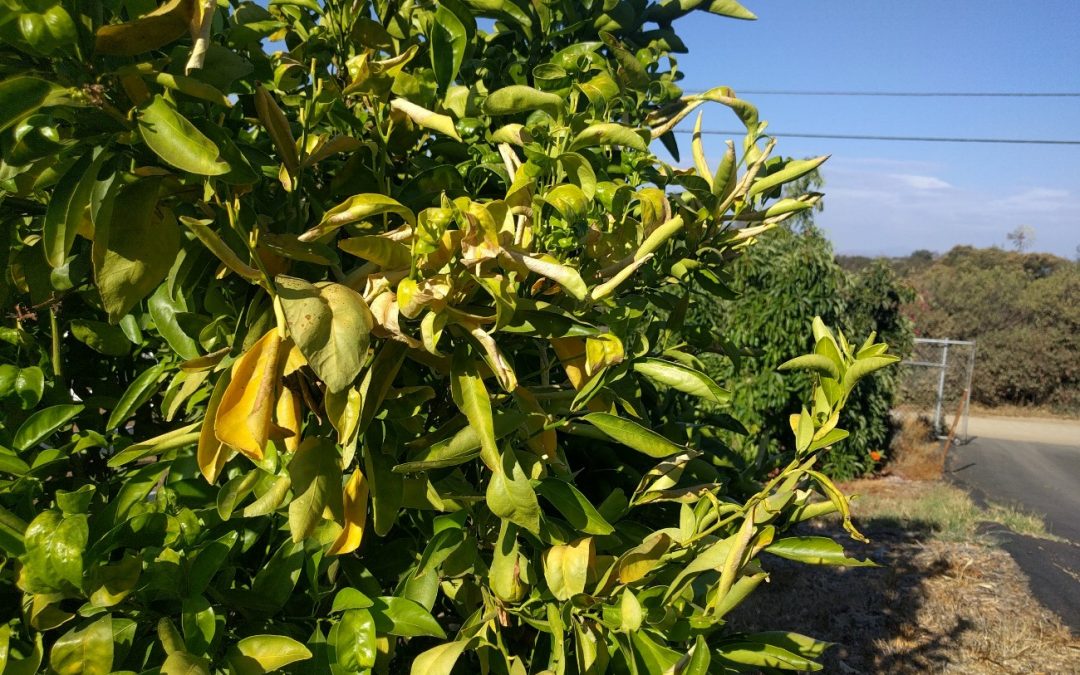 It was so hot that it burned native live oak trees. Never seen that before.

As far as the garden goes, I won some and lost some. I have seen and heard from many others up and down Southern California who had the same results — the exception being anyone who lives within a couple miles of the beach. They only heard about the inland heat.

This post is about what we’ve done right and wrong in caring for our vegetables and fruit trees during the intense heat. The goal is to help us get through the next heat wave better.

First and foremost, water everything, and do so before the heat wave hits. Compare two of my grapevines. I had watered this young grapevine deeply just before the heat hit on Friday, July 6. It took the 113-plus-degrees in stride.

But I didn’t get around to watering this grapevine until the heat was already upon it. Obviously, this was too late.

I’ve seen this strategy of watering thoroughly before the heat hits work very well on any and all vegetables and fruit trees during this last heat wave as well as during previous heat waves. It just works. I know this much firsthand.

Why does it work? As one University of California soil scientist and irrigation expert explained it to me, when the heat gets severe the plant is unable to take up water through its roots — just when it needs that water most. The plant stops transpiring (exhaling water from, mostly, its leaves), which is necessary in order to draw water into its roots. In essence, the plant shuts down.

However, if the plant had had ample soil moisture available to it before the severe heat hit, then the plant would have fully hydrated itself and be as fortified as possible to tolerate the heat and suffer as little damage as possible while it was shut down. You are preloading the plant before the stress.

It’s akin to the advice your mother gave you to eat a good breakfast before you start a busy day.

Secondly, water some plants during the heat wave. In my experience, most vegetables and avocados usually need irrigation daily when the mercury rises into triple digits. This was certainly required with last week’s record heat. For the most part, this is because most vegetables and all avocados are relatively shallow rooted.

In contrast, I watered my citrus trees just before the heat and found no need to water them again during the heat. Same with peaches and plums and other deciduous fruit trees. I felt the soil under all of these trees amidst the heat wave and found it still plenty moist.

One last thing: Wetting a plant’s leaves gives it relief from heat stress. If you’re around and able to do it, then spray down the foliage of plants that are wilting even though they have moisture in the soil below; you’ll see them perk up immediately.

Protect plants by shading them if you can. Use whatever is on hand: a chair, a table, a beach umbrella, a tomato cage covered in shade cloth. This baby avocado tree came through the intense heat perfectly because I shaded it:

Other larger avocado trees were impossible to shade, and some of their leaves burned despite the plentiful water I gave them. Avocados are not built to withstand 110-plus degree heat and low humidity.

Here are the crispy leaves of an adjacent avocado tree that I didn’t shade:

Here is a video tour of some of my avocado trees and the damage they incurred on July 6 and 7, 2018:

Shading works, and it’s easy to do for small plants. But is there anything we can do for big ones?

There is the option of spraying a protectant on the foliage. One such product is called Surround WP. Some farmers use this kaolin clay spray and it appears to be effective at preventing sunburn while also not harming the plant’s ability to grow. It’s even claimed that this clay film protects against some insect damage.

Growers of mangos near Indio spray the leaves of their trees with such a clay product. I also noticed during this heat wave that one of the vineyards in my neighborhood had been sprayed with clay, and the vines look like they appreciated it.

I’ve never tried this clay spraying, but if it gets up in the 110s again soon I just might.

What to do about the burned leaves after the heat has subsided? With most plants, like bananas or blueberries, you can remove the burned, dead leaves. With avocados, however, leave them alone for a while. You don’t know exactly how far back on a branch the damage has occurred until new growth starts sprouting — that could take a month or more — and the dead foliage might be beneficially shading branches below. Avocados are so sensitive to sunburn that this is useful temporarily. Immediately paint any exposed bark. (See my post, “Avocados trees get sunburned — what to do?”)

If a young avocado tree has had most of its leaves and branches burned, you might consider replacing it. A new tree is likely to outgrow such a damaged tree even if the damaged tree does ultimately recover. I’ve found that severely damaged young avocado trees are very difficult and slow to bring back to health.

Also for a severely burned avocado or any other type of plant, remember that its water needs will be lower since it has fewer leaves. It’s mostly the leaves that cause the roots to suck up water in the soil. If you continue watering a damaged plant as much as you had before, you might find yourself with soggy soil and diseased roots.

Again, in summary, water everything before the heat hits, water some plants during the heat, and shade what you can. That’s the best strategy of protecting plants during heat waves that reach well over 100 degrees.

(You might also like to read University of California Farm Advisor Ben Faber’s perspective on this heat wave from Ventura and Santa Barbara: Frost Damage in July?)

The effects of the extreme, record heat of July 6, 2018 have been revealing themselves incrementally over the succeeding month and a half. Some of them were expected. Exposed fruit were sunburned. I saw sunburn on apples and avocados mostly.

Some avocados also dropped. In fact, over the weeks I lost hundreds of small Reed avocados from a single tree that had a huge fruit set going into early July even though it held onto all of its mature fruit. The neighboring Lamb avocado tree lost very little of its fruit, however, and I don’t know how to explain this combination of consequences. I’ve seen that some of you have experienced variable and sometimes perplexing fruit drop on avocados and other fruit trees too.

Burned foliage on plants and trees has dried up and started falling off. Many new leaves have started to grow on healthy plants. My burned grapevine above has recovered foliage. My avocados have grown new leaves. It’s now time, finally, to safely cut out the dead stuff.

A few fruit trees have responded to the heat stress by flowering. First, my apples bloomed. These are Fuji and Pink Lady apples, not Anna or Dorsett Golden (varieties which practically bloom all year long).

Now, my Kishu and Pixie mandarins are also flowering. My Bearss lime is flowering too, but limes and lemons are always flowering so that’s nothing remarkable.

On July 9, I felt relief that the heat had subsided, but since then it has been a month and a half of new damage unexpectedly showing up. You think, Aaaaaah!, the heat is finally over, but the consequences of that heat continue to manifest.

Let’s not be surprised if it lasts for a full year or more. Some trees grow flowers and fruit on wood that has developed the previous summer. So if this summer damaged such wood, we might be in for a zero-to-low crop on the tree next year. The drama has yet to stop unfolding.