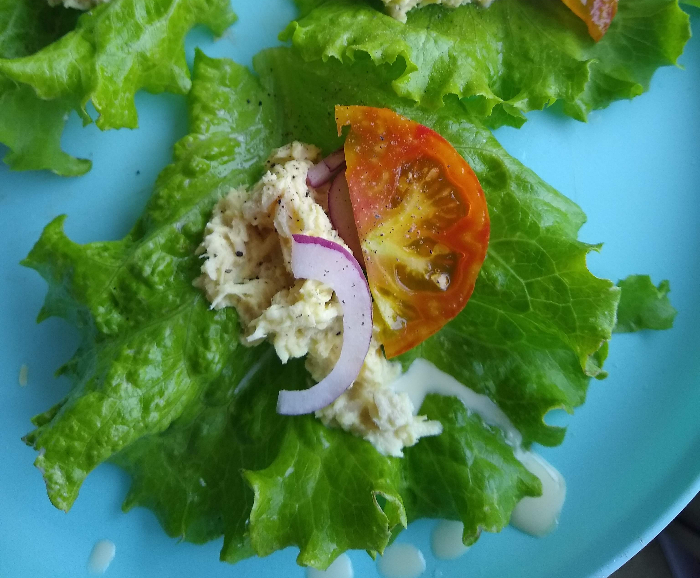 “Lettuce, a cool-season vegetable, is extremely sensitive to high temperatures,” it reads on page 385 of the California Master Gardener Handbook. Well, the average high temperature in the summer in my neighborhood of Southern California is the low 90’s . . . but let’s still give it a shot!

Actually, I’ve been giving summer lettuce a shot for more than 15 years. It’s just so refreshing to have cool, crisp lettuce with lunch on a summer afternoon.

The two most important things I’ve learned about overcoming the fact that lettuce doesn’t want to grow in the summer heat are to choose the right varieties and to be obsessively attentive — to never let the plants stress about water or root growth, from germination all the way until harvest.

Here are details about those two factors and some other tips I’ve learned about growing lettuce in the summer.

Regardless, we in Southern California know that the closer your garden is to the ocean, the cooler it is — and the closer the temperatures are to 70 degrees — in the summer. Therefore, growing lettuce in the summer right by the beach isn’t as much of a challenge as it is inland. Near the beach, you mostly need to keep your lettuce consistently watered in order to have success.

Compare these two plots of lettuce growing in August 2020 in the Carpinteria Community Garden, which is a couple blocks from the Pacific Ocean:

On the other hand, the farther inland you live, the more important it is to grow certain types and varieties of lettuce during summer. The iceberg type of lettuce is the least tolerant of heat. Romaines and butterheads and Batavian types are more tolerant of heat.

Moreover, within these lettuce types there are specific varieties that do better in the summer, meaning they have a reluctance to bolt (flower), are less likely to taste bitter, and are less likely to get brown leaf edges (tipburn).

The last couple summers, I mostly grew two varieties: Jericho (a romaine) and Kagraner Sommer (a butterhead). Both claimed heat tolerance, and they performed decently.

But last summer a farmer I know was growing better lettuce plants in inland Southern California of a different variety: Magenta. So this year, I’m growing that variety and another variety called Muir. Here at the end of July, both of these varieties have gone through the longest days of summer and a good amount of heat (in my yard: 19 days of 95 degrees or higher) and are performing even better than Jericho and Kagraner Sommer.

I can’t say for sure how much this is due to variety — because I think I’ve improved my growing in a couple other ways too — but I can say that my summer lettuce this year is the best I’ve ever grown.

My Magenta and Muir seeds were purchased from Johnny’s Selected Seeds, who also recently held a webinar about growing lettuce in summer heat. Some other varieties that were recommended in the webinar include Monte Carlo, Coastal Star, and Cherokee.

If you’re going to grow lettuce in the summer, and you’re going to choose the best genetics (varieties), then you’re probably going to be starting your plants from seed. It’s unlikely that a nursery will be selling seedlings of the best summer lettuce varieties.

Be aware that lettuce seed does not like soil temperatures over about 75 degrees. To germinate lettuce seed best, try to keep the soil (by keeping the surrounding air) to around 70 or below.

This means you’re best not trying to directly sow the seeds in the garden dirt, which might be too warm. Sow them in containers which you can keep in the shade, even indoors. Down on a concrete floor will always be even cooler than up on a table.

Last week, I was talking to the farmer who grew Magenta lettuce last summer. “Magenta is doing well for me,” I told him. “Thanks for recommending it.”

“Mine all bolted while still small,” he said.

“Lettuce needs attention. It needs to be cultivated. If you let weeds grow, it can’t compete. And you know I don’t spray herbicides so I’m dependent on labor and I can’t find anyone to work in the fields right now,” he said.

This farmer also told me that lettuce needs ample nitrogen in the soil so it grows fast right from the beginning of its life or else it will be stunted and it will try to flower before you get a harvest.

High nitrogen and overall soil fertility might be part of the success of my lettuces this summer compared to previous summers, as I am growing them in containers full of my homemade compost, which contains chicken manure, rather than in garden dirt as usual.

If you’re going to grow summer lettuce in containers, I’d recommend not using cheap potting soil. One that my farmer friend recommended and which I’ve had good success with while growing other plants is G&B Organics Blue Ribbon Blend.

This reminded me of something I heard many of the farmers in the Johnny’s webinar say about growing successful summer lettuce, which is to avoid slowing the plants down by letting them get rootbound by waiting too long to transplant the seedlings.

You must transplant into the ground or a bigger container on time, before the lettuce plant’s roots fill its container. You can’t slow the growth of the summer lettuce plant by restricting the expansion of its roots or the plant will be stunted, and even a temporary halt to its growth will encourage bolting.

In addition to growing in fertile soil and transplanting on time, lettuce plants in the summer — especially when young — cannot be allowed to stress and have their growth halted by drying out.

(Man, these summer lettuce plants are finicky! Just grow lettuce in the cooler seasons if this sounds like too much effort. See my post about growing lettuce in Southern California in fall, winter, and spring.)

Water stress (shown by wilted leaves lying flat on the soil) makes the leaves more likely to get brown edges and the plant more likely to bolt. When a lettuce plant bolts it first elongates its center stalk and then flowers emerge, but right when this process begins the leaves on the whole plant will start to taste bitter, and there’s nothing you can do to stop this bitterness.

Right now, I’m watering my mature lettuce plants with a single drip emitter in each one-gallon container. I run the drip system at 7 AM every morning, applying about one-third of a gallon of water each run (each day).

Because lettuce prefers to grow in temperatures around 70, creating an environment close to that would seem to yield the best results. Shade reduces the temperature around the plants. I’ve used 50 percent shade cloth and 30 percent shade cloth over my summer lettuce many times in order to keep the plants cooler. I’ve also placed plants near or under the shade cast by larger plants.

In addition to shade, some of the farmers in the Johnny’s webinar mist or sprinkle their lettuce plants for evaporative cooling. One farmer said that sprinkling the leaves with water for 15 minutes every couple hours through the middle of the day has worked well.

I had always showered my lettuce plants on hot summer days too . . . up until a few weeks ago.

Since early July I have been growing my lettuce in full sun and without doing any afternoon sprinkling. The daytime highs during this period have been between 87 and 99, and my plants have improved. I now have less tipburn on the plants and less rot lower down on some interior leaves. Maybe even 30 percent shade was too much. Maybe the overhead watering had been keeping the leaves wet for too long; or maybe I had been sprinkling too often.

Regardless, the results are undeniable — surprising but undeniable. The plants simply look better.

So, I have to wonder now whether the shade and evaporative cooling was unnecessary — except perhaps when temps reach over 100? — and were they possibly even harmful. I’ll update this at the end of the summer as I continue to test.

Finally, one more tip mentioned in the Johnny’s webinar was to harvest earlier than in the cooler months. Rather than waiting for the lettuce plant to form a large head, it’s best to harvest a bit sooner and not risk bolting, which can happen very fast in warmer weather.

As for my lettuce this summer, instead of waiting for a head to form I’ve been using a different harvesting style altogether by picking outer leaves off each plant each day.

Or each morning, I should say. In the summer, it’s vital to harvest lettuce in the morning when the leaves are still cool and turgid. Immediately get the lettuce into the fridge after harvest too.

If you forget to harvest in the morning, and you must have a salad with dinner, then get a bowl of ice water ready before picking. Plunge the leaves in right after and they should become acceptably crisp.

On Tuesday morning my son helped pick the lettuce above, and we put it into the fridge. Then we made lettuce tacos with tuna at lunch time. Cool summer.