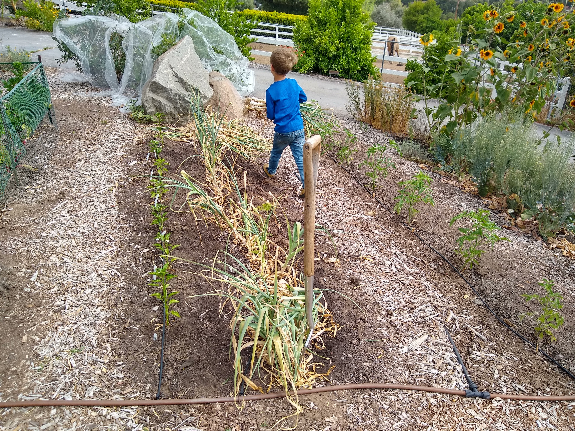 My five-year-old son didn’t want to sit in front of a computer for another school session. “Can I do work for money?” he asked.

With teamwork, I forked the dirt to loosen it around the bulbs and then Miles pulled the tops and shook the clods off the roots. “Pull up gently or else you’ll break the stalk,” I guided him. “Don’t knock the bulbs together because you might bruise the cloves.”

Halfway down the row I paused to get a shot of the white bulbs with roots holding onto chunks of brown dirt. I just thought it looked neat.

“Stop taking pictures,” Miles said. He is a man of action. I was slowing him down.

After we had carried all of the garlic into the garage for storage, I told him I would give him two dollars for that job. He began doing calculations in his head. Then he said, “But why do I get only two dollars. Isn’t it . . . “

I knew what he was searching for. “The garlic harvesting wasn’t really skilled labor because I was teaching you how to do it as we went along.”

“Then can I harvest some potatoes?”

Miles already knew how to harvest potatoes. He’d been doing it with me since before he could walk — he tried to eat a potato bug that was unearthed during that first harvest.

He knows where the tubers are to be found under a potato plant, how to scoop them out of the dirt without scratching the delicate skin, how to eventually pull up the plant top to reveal more potatoes, how to gently place the potatoes into the bucket (not toss them in!). And lastly, he knows my personal routine, which is to choose the biggest tuber from the bunch and set it back in the dirt — eyes facing up — so it becomes a “mother” and we get more potatoes growing in a few months.

I paid him three dollars for his potato harvesting, his skilled harvesting.

Growing the vegetable plants and fruit trees is only the beginning of our work as gardeners. Unless we can finish the job with a skilled harvest, we reduce the benefits of skilled growing. The older I get as a food gardener, the more I respect this tail end of the process. It requires as much skill as sowing, watering, etc.

In this post I will not go through everything I’ve learned about harvesting every crop, but I’ll touch on a few examples of different aspects of harvesting. And finally I’ll share resources for learning more about harvesting specific crops.

Some fruits start to spoil after they are picked from the plant, but others continue to ripen. They actually improve and become tastier. These are called climacteric fruits.

We all know that bananas are like this even if we’ve never grown them ourselves. Bananas can be picked green and then will yellow and soften and sweeten. Peaches and tomatoes do the same. The trick is in knowing how early, how “green” they can be picked. Skin color is usually the best indicator. The fruit literally begins to lose the green in its skin, and from that point you can probably pick it and ripen it on the kitchen counter.

The time of day was the problem. Certain vegetable crops should be harvested as early as possible in the morning. Through the night the plants cool and fill with water. They become crisp — turgid is the technical term. In the early morning they are coldest and crispest, and if you harvest then, you can store them in the fridge for weeks.

Lettuce works like this, as do greens such as chard and kale to a lesser degree.

One work-around especially for lettuce — if you have to harvest it later in the day — is to set it in ice water for a couple minutes immediately after harvest. This firms it up.

Besides lettuce and greens, other vegetables also store well in the fridge. We can take advantage of this and make our harvesting more efficient by harvesting in batches rather than singles.

For example, instead of pulling up one or two carrots each time we feel like eating some, we can harvest a batch of them, clean them all at one time, and put them in a container with some water. In the cool fridge they will still taste as good as on harvest day even a couple weeks later.

Last week I talked to someone who was having a hard time knowing the season for picking her Reed avocados. I can relate.

Reeds reach full size in late winter, which makes them look ready for harvest. The tree also tends to drop a few fruit in April or May, making you think they must be mature. But don’t be fooled. Reed avocados only develop their full flavor closer to July. In August or September they are incredible.

Oranges and tangerines are other fruits whose harvest seasons must be learned because they turn orange on the outside — and therefore look ready — before they taste sweet on the inside.

My daughter pulled down so many pea vines this spring while she was trying to yank the pods off. “Two hands!” I would say. “One on the pod, one on the vine.” But she’s only three so she continued doing it her way.

Certain crops can be easily picked using the right method whereas whole branches can be broken if the wrong methods are used. Have you ever noticed that the stems of peppers are curved? If you pick by bending the stem in the opposite direction of the curve, the peppers usually come off easily and cleanly.

And have you ever noticed that some tomato varieties have stems with elbows? Snapping at the elbow is the best way to pick those.

Find more details than you could want about harvesting and storing many different fruits and vegetables from the “Fact Sheets” of the University of California’s Postharvest Center.

Although Johnny’s Selected Seeds is based in Maine, I have always found their “Tech Sheets” very informative, including the sections on harvesting. A list of Johnny’s Tech Sheets for various vegetables.

A couple of books with excellent sections on harvesting are The Home Orchard (for deciduous fruit and nut trees) and California Master Gardener Handbook (for vegetables, citrus, and avocados).

Finally, I’ve written posts about growing and harvesting many fruits and vegetables, and of course the information in these are geared toward our Southern California climate. Find them in my list of all Yard Posts HERE. I continue to improve in my own harvest techniques, and I update these posts as I do.

Let’s not waste any of the effort we put into growing our food gardens through unskilled harvest.