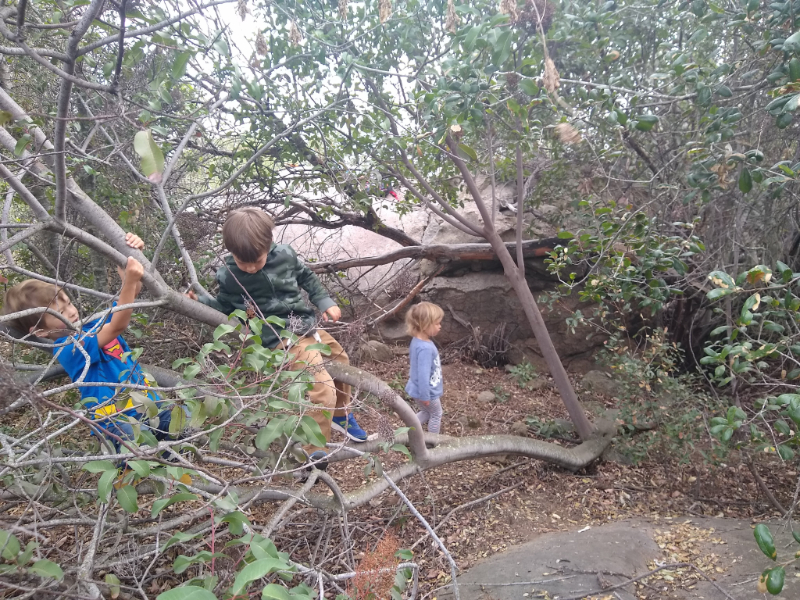 “We think we heard footsteps.”

My kids had run back to the house from the wild corner of the yard. It’s at the top of the hill, out of sight, and just jungly enough such that a six-year-old, a five-year-old, and a three-year-old can get spooked.

Our yard is bigger than some, not as big as others. It’s just over an acre. We’ve lived here for seven years. I’ve planted most of the land near the house to vegetables and fruit trees. That totals about a half acre. But up the back hill I haven’t planted anything. It’s been left to nature.

On Tuesday morning, the kids had filled their backpacks and headed up to the wild corner before me. I told them I’d meet them up there. They came back spooked, and then I joined them, following along with my camera.

After reaching the top of the hill, we enter a gated area. I don’t know why it’s gated. I can only guess that the previous owners once kept animals up there.

I have no desire to keep animals up there, but I do covet it for avocado, mango, and banana trees. Our location, Ramona, gets cold enough in some winters to damage such trees. I have them growing lower on the hill near the house, but it’s colder down there. The previous owners in fact had four avocado trees growing in this part of the yard when we moved in, but the trees hadn’t been watered for a while, were in poor health, and I decided to let them die and plant new ones.

Nevertheless, I made my tradeoff wittingly. The kids gain so much from having a corner of the yard that is wild, and secretive.

You have to enter the wild corner by climbing up a rock that my three-year-old is only able to summit by herself starting this week. From the top of the rock, the kids always pause to scout from the high vantage point. This is the highest point in our yard.

Now you can enter. Downclimb to go under the dead sumac.

And at last, find yourself in a private hollow within a canopy of mostly sumacs and live oaks.

The kids climb around. They break branches, pull off leaves, scar a few trunks, gather sumac sap. I don’t care if they’re a bit destructive, not up here.

It’s not just for the kids that I keep this corner of the yard wild. I have an affinity for native plants, as they form communities that are unique to their spot on the planet. That’s special to me. It’s something to be appreciated and conserved. Nowhere else on this whole huge Earth will you find the above plants growing wild together except in this relatively small niche.

More than that, the wild corner can be studied. I’ve learned some things from observing the wild corner at different times of the year for seven straight years. One thing learned is that nature is not a still-life. A twenty-foot-tall oak died a couple years ago, possibly due in part to the drought. I’ve seen crows, hawks, owls, scrub jays, and hummingbirds use its leaning, dead frame as a perch. Underneath, oak saplings and an elderberry have recently risen up to capture the newly available sunlight.

Another thing I’ve noticed many times is the deep mulch that has naturally formed on the floor of the wild corner.

I add the mulch under my fruit trees down by the house. I use wood chips and some compost that includes manure from my chickens. That mulch is artificial, in a sense. But it’s a mimic of nature. The plants in the wild corner have created their own similar mulch, and it contains similar ingredients. A closer look shows not only leaves but also twigs, decomposing large branches, feathers from birds, and animal droppings. Rabbits and squirrels live in the area.

And my kids were not out of touch when saying they heard a coyote. Coyotes have picked off some of our chickens and eaten them up in the wild corner. We’ve discovered plenty of bones up there.

A dig into the mulch shows roots just under the mulch-soil interface. This surprised me at first because we live in a climate with around six consecutive months of no rain each year. How could these roots not dry out and die? The evidence is that they don’t, and each time I dig into this mulch I find it cool underneath and retaining some moisture even at the end of a hot, dry summer.

The timer on my phone goes off!

“Sorry, guys, but we’ve got to get back to the house because class is starting in a few minutes.”

Sighs all around. Kids climb down from pretending to be animals up in the trees, and then they climb back up the rock, down the rock, out the gate . . .

At 10 o’clock, they’ve got to be in front of a computer for a school meeting. At least they touched the natural world for a bit first.