Natives at the roadside, 2020 update 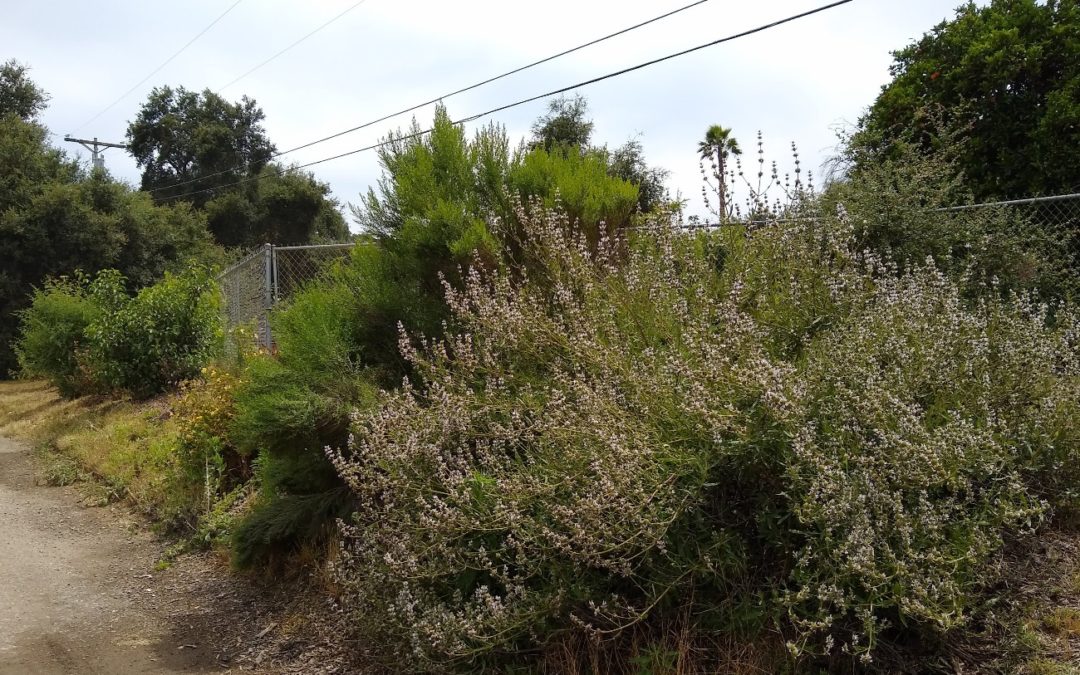 On Monday morning I was watching the bees feed on the flowers of a black sage plant at the edge of my yard by the road. Two of my neighbors walked by, and one said, “Your plants are beautiful.”

Then I thought, The beauty of these plants has nothing to do with me. I don’t even water them. But thanks!

In the summer of 2013, that’s seven years ago now, as soon as my wife and I moved into our house I began planning for a hedge of plants along the road. It is a dirt road, so I wanted dust mitigation. And there were no plants in the yard between our house and the road, so I wanted some privacy. I decided on natives as the type of plants for the roadside.

I wrote a couple posts about this project back in 2015. The first was, “Hedgerow of native plants brings all kinds of benefits.” The second was, “Natives at the roadside.”

Here I’ll look at how things have developed over the last five years and a few of the things I’ve learned along the way.

One of my favorite things has been the positive reactions of many neighbors. When one of my ceanothus bushes was in full bloom, for example, I had a neighbor stop her car, get out and photograph it. No one is trying to take pictures of my avocado trees or grapevines, but the native ceanothus is a car stopper.

This past winter, another neighbor appreciated my roadside natives enough to help me add to them. He brought me three native plants that he had potted up from his yard: a ceanothus, a scrub oak, and a yellow bush penstemon.

I’ll be giving these new plants water about once per month through the summer until rains start in the fall. That has been my routine for all of the natives I’ve planted by the road during their first year. After their first summer, I cease irrigation. The native plants live on natural rainfall.

But I do usually add extra rainwater each winter from the runoff from my roof. So the plants feel like they’ve gone through a wet winter regardless of how much rain has fallen. This has helped the plants to grow strongly and steadily.

Without any summer irrigation, however, some plants go dull or brownish or even deciduous toward the end of summer, as they do in the wild. I accept that.

Parts of the yard now have a green buffer from the road and its dust. Instead of watching cars drive by, we get to look at a sugar bush or a coyote bush.

Yet I planted in clusters so there are also open spots remaining, and in some sections the plants are so short that they don’t catch a significant amount of road dust nor provide any privacy yet. The planting continues . . .

Within the clusters of plants that I put in first, the foliage is dense and the plants are mature enough that they are beginning to serve as wildlife habitat. I see lizards hanging out under some, possibly digging burrows there or possibly just waiting to nab a bee to eat.

The birds mostly hang out in my neighbor’s hedge of oleanders and oaks across the road, which is far bigger and denser than my hedge. Then the birds fly across to peck at my apricots — not so welcome — but they also munch on some insects among my fruit trees — welcome.

What I’ve enjoyed the most, though, is the arrival of the bees when each of the native plants is in bloom. Most visited have been the blooms of ceanothus ‘South Coast Blue’ and ‘Ray Hartman’, coyote bush, and black sage. I’ve spotted lots of honeybees, but also natives such as yellow-faced bumblebees.

Also because some of the plants are now mature, they’ve started reproducing and spreading. This winter, for example, I found three black sage seedlings and two monkey flower seedlings.

It feels like the roadside plant community will reach a point where it reproduces and spreads itself so well that my only job will be to contain it. That might be ten years down the line though.

I have gotten away without using any herbicides to kill the weeds. When we moved in, tumbleweeds covered the area. I killed them with a shovel before they set seed, or if they’d already set seed I took them to the trash. One year of this made a big difference. In the second year, there were only a few tumbleweeds to deal with. I have not seen a single tumbleweed appear in a couple years now.

Another weed in that area is Bermuda grass. When planting, I dig up all the Bermuda grass within a few feet of the planting hole. Around a new plant I put a thick layer of woodchips. Eventually, the Bermuda grass invades those woodchips and grows near the new plant, but I pull it out every now and then — not digging down to get roots, but just removing the top growth.

This control has been enough to allow the plants to establish themselves. Once the plants grow big, they shade out the Bermuda grass and I no longer bother pulling it around such mature plants.

I do also mow the grass and other weeds a few times a year.

As I mentioned in previous posts, my hope was to restore the native vegetation that I thought might have grown along the road before it was bulldozed. In other words, I didn’t want to just plant “California natives” but rather plants that were truly native to my yard or neighborhood as best as I could determine.

This proved to be a task that my propagation skills weren’t matched for, unfortunately. I failed at growing so many plants that I chose to purchase and plant whatever was at least similar to those true natives.

For example, I bought and planted that ceanothus ‘South Coast Blue’ because my cuttings of ceanothus plants from my neighborhood failed.

But I’ve grown slightly more skilled, and some of my roadside hedge plants now are from my own cuttings, and some are from transplants, where I just dug up small plants in other parts of my yard or the neighborhood. I’ve yet to have much luck with seeds though.

As of today, here are the plants that fill my roadside hedge of natives. The common name is in bold followed by the scientific name in italics in parentheses, and that is followed by where the plant came from.

Phacelia (Phacelia ramosissima or cicutaria or?)- transplants from other parts of my yard

Coastal sagebrush (Artemisia californica)- transplant from a friend’s yard nearby

Scrub oaks (Quercus species?)- transplanted from other parts of my yard, and one from a neighbor

California buckwheat (Eriogonum fasciculatum)- transplanted from other parts of my yard

Deer weed (Acmispon glaber or Lotus scoparius)- appeared on its own, but it does grow in other parts of my yard

Blue elderberry (Sambucus cerulea or Sambucus nigra ssp. caerulea)- one started as cutting taken from plant in my neighborhood, one bought from Moosa Creek Nursery

And listen to this: After planting an elderberry down by the road a couple years ago that I’d grown from a cutting that I took from a plant in the neighborhood, just last year an elderberry sapling appeared on its own in another part of my yard, very far from the road.

That made me confident that elderberries could have been growing wild by the road before the area was devegetated. I love feeling like I’m helping to restore native flora and fauna to surround my food garden.