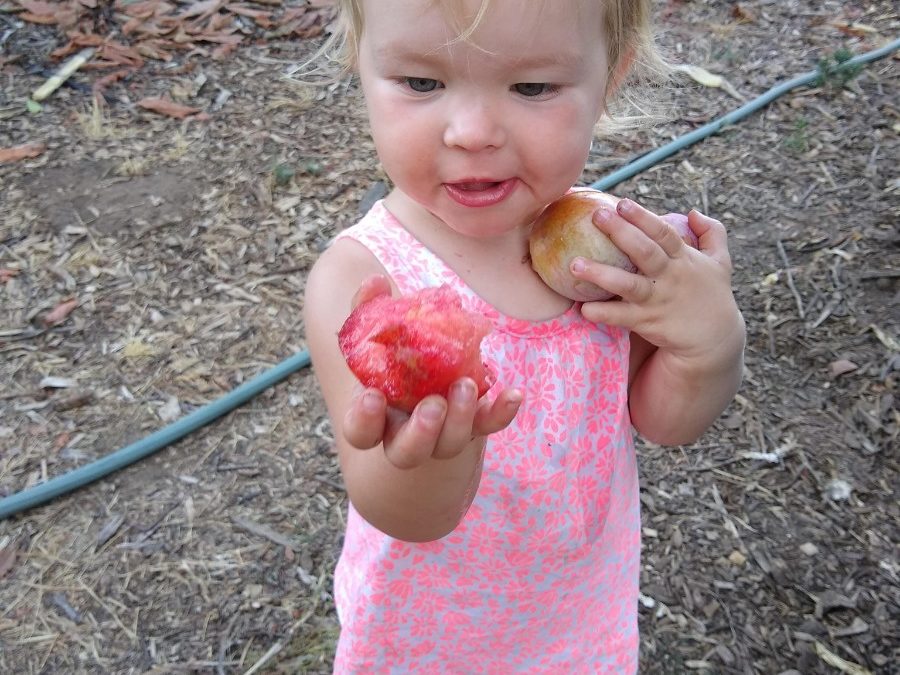 I never met the man, but Floyd Zaiger made my yard taste better. I grow some of his apriums, like Cot-N-Candy.

I’ve got his cherry for warm-winter places like Southern California, called Royal Crimson. I’ve got some of his Pride peaches, such as the reliable Mid-Pride. And I grow pluots. My daughter is eating a few Dapply Dandys at the top of the page, but my own all around favorite is Zaiger’s Flavor King.

To me, Floyd Zaiger was the Flavor King. He mixed and matched apricots and plums, nectarines and plums, plums and apricots, in order to reach new heights of eating pleasure: texture on top of taste on top of all varieties that came before.

He called his company Zaiger Genetics, but all he was doing was taking the pollen from one flower and touching it to the pistil of another. This is something a bee could have done. This was not genetic modification or genetic engineering. This was traditional plant breeding. Watch the process at Zaigers explained in this video:

Floyd Zaiger passed away earlier this month, on June 2. He was 94 years old. He leaves his company in the hands of children and grandchildren who have been working beside him for decades. We’re sure to continue seeing new varieties of stone fruit arrive from the Zaigers through Dave Wilson Nursery, their exclusive wholesale grower in California.

I fell in love with Zaiger’s pluots more than any of his other inventions, save perhaps the Bella Gold peacotum (peach, apricot, plum).

Zaiger’s pluots are the pinnacle of stone fruit. The have better crunch than most plums, they resist pests and diseases better than peaches and nectarines, some pluot varieties have a month-long harvest season, and they take the heat better than apricots. They also produce massively if you match the variety to your yard’s climate.

Pluots deserved a book written about them. Chip Brantley wrote it, and titled it, “The Perfect Fruit.”

Floyd Zaiger ended up in California’s Central Valley after having been born in Nebraska in 1926. He served in the Army during World War II before earning a degree in plant pathology from the University of California at Davis. After Davis, Zaiger and his wife Betty earned their living by breeding and selling azaleas and rhododendrons before making a committed switch to fruit.

But Floyd Zaiger would go on to greatly improve the potential of plum-apricot crossings by backcrossing with plums to create what he called pluots. (A 50/50 hybrid of plum and apricot is usually referred to as a plumcot.) A pluot is a piece of fruit with more plum than apricot in its pedigree.

Let me return to the pluot that Zaiger named Flavor King. My grandma was visiting last summer when the Flavor King pluots on my tree were in season. My kids were hanging out by the tree much of the day and sharing fruit with their great grandmother. Then when it was time for her to drive home I noticed that she strolled back down to the Flavor King tree on her own to pick a few for the road.

A couple months later my grandma asked if I could help her plant a Flavor King pluot tree in her yard. Grandma has dozens of fruit trees; guavas to tangerines to pears to loquats to avocados to apples to plums; she’s been growing fruit trees for longer than I’ve been alive; yet she needed to add a Flavor King pluot. Thank you, Floyd Zaiger.

List of some fruit varieties that Floyd Zaiger created.

Video of a Wednesday “Cream of the Crop” tour and tasting at Zaigers.

Here is my post about “Growing pluots in Southern California.”