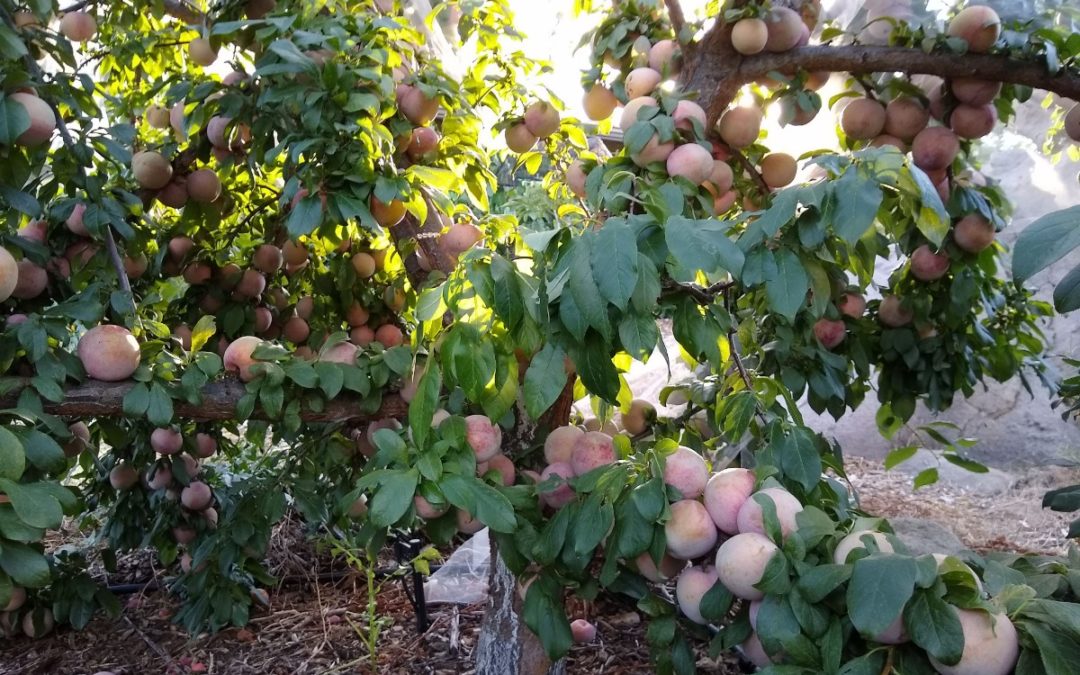 I’ve met people who don’t like the tart skin of some plums, and I’ve met people who find apricots mushy, but I’m still waiting to meet the person who has eaten a homegrown pluot and doesn’t ask for more. Just this week I shared some from my trees with a friend who has an abundant and diverse orchard of his own, and later that day I get this text: “Did you sell all your pluots? I want to buy a few more if you will sell a box.”

Pluots are that good.

This post is about my experience growing pluots in Southern California, sprinkled with observations of, and reports about, others’ local pluot trees.

What is a pluot?

Plums and apricots are said to have cross-pollinated in nature for centuries, and Luther Burbank, the famous plant breeder of Northern California, deliberately crossed plums and apricots to make what he called plumcots, which are half plum and half apricot.

But pluots are plum-apricot hybrids that are more plum than apricot. This is accomplished by “backcrossing” a plumcot with a plum. Now you’ve got a fruit that is three quarters plum and one quarter apricot.

There are many other complex “interspecific” hybrids, such as apriums, nectaplums, peacotums, and pluerries — where will it end? Yet, all of them are created through traditional plant breeding methods where one takes pollen from the flower of one tree and puts it on the flower of another tree. There’s no newfangled genetic engineering happening in labs here.

The pluots we have today are products of the breeding efforts of another California man, a man who is still alive and innovating, named Floyd Zaiger. (See an interview with Zaiger, his family, and watch some fruit breeding in action here.)

Pluot trees look like plum trees, and pluot fruits look like slightly odd plums, but Floyd Zaiger has been at it so long that the array of pluot varieties now growing around the world come in every shape and color imaginable. Among only the four pluot varieties that I grow in my yard, there is one purple fruit, one red dappled with yellow, one orange, and one green. They can be shaped like balls or hearts or grenades.

While I have tasted dozens of pluot varieties, the only ones that I will make brief comments on are those four that I grow in my yard. I encourage those of you who grow pluots to share your experience with other varieties in the comments section.

This is the crunchiest pluot I’ve ever had — but to top it off, the crisp texture remains even as the taste reaches extreme sweetness. Those two never coincide! Only in Flavor Grenade.

My brother, who grows many pluots, ranks Flavor Grenade as his favorite.

This is my orange one, and it is the first of mine to ripen, in July. If picked on the early side, Splash has a tang that reminds me of tangerine.

After Splash ripens, Geo Pride and then Emerald Drop start around late July.

On the tree, the Dapple Dandy fruit look gray as they are covered in their natural waxy “bloom”. They look, honestly, unappealing, which makes the flesh inside that much more surprising. It is a starburst of white and red. It is also juicy and very sweet — less sweet than Flavor Grenade, but sweeter than Flavor King.

There has been a day when each of my pluots has been my favorite, but lately Flavor King has owned more of those days. They’re easy to eat since they’re small and the flesh comes off the stone relatively cleanly. And Flavor King has a taste that I can’t put a word on, but . . .

Watch me try in this short video I made profiling the Flavor King and Dapple Dandy pluot fruits as well as trees:

Because there are so many varieties of pluots, you can grow one that will be ready to eat at the beginning of summer or way off the tail end. Just with our four varieties, the family eats pluots continuously from July through September.

See this harvest chart made by Dave Wilson Nursery, the propagator of Floyd Zaiger’s pluots, which shows the expansive harvest season of pluots: from the end of May into October. And also notice that some individual pluot varieties have long harvest windows.

It amazes me how long pluots hang compared to, say, peaches. Just this year, for example, we started eating Dapple Dandy pluots in mid-August and here in mid-September much of the fruit left on the tree is still at peak flavor. That’s a month of excellent fruit from one variety.

There are two characteristics of pluots that might make them challenging for you to grow in your yard. One is that they require another pluot or plum for pollination. You can’t just grow one pluot tree.

There are two main ways to meet this challenge. First, you can plant two trees (of the right varieties). You can even plant them very close to each other. I planted a Flavor Grenade pluot eight feet away from a Burgundy plum in my mom’s backyard, shown below.

You can plant them even closer, like a foot or two apart, and grow them as if they are a two-trunked single tree.

Second, you can buy a multi-graft tree, a tree that has more than one pluot variety on its rootstock. All multi-graft trees should have the right varieties for proper pollination.

How to know which variety pollenizes another? Tags on fruit trees at the nursery should have this information. For example, here are the tags that came with my Flavor Grenade pluot tree:

The information is also available on the Dave Wilson Nursery website, on the page for each individual variety.

The other characteristic of pluots that might make growing one a challenge for you is that they perform best in inland Southern California locations, where winters are relatively chilly. My pluots perform well most years; I am twenty miles from the ocean, in the foothills of San Diego County, in Sunset Zone 20.

I’ve seen other pluot trees look good and fruit well in similar locations, such as Pomona, in Los Angeles County.

But closer to the beach or where the winter nights aren’t as cold, I have noticed some pluots not performing quite as well. Also, in the peculiarly warm and dry winter of 2017-2018, my own pluots didn’t set much fruit. (See my post, “Effects of a warm and wacky winter on deciduous fruit trees.”)

Dave Wilson Nursery has chill-hour ratings for all of the pluot varieties that they sell. And they recommend four as “low chill,” meaning these varieties should perform well in yards that get less than 500 chill hours (which describes all of Southern California within around ten miles of the ocean). These four are Emerald Drop, Splash, Flavor Grenade, and Flavor King.

As pluots look and act like plum trees, you can prune them and otherwise treat them as such. I’ve seen no behavioral differences between pluot trees compared to plum trees on the whole, although certain varieties do have quirks. Flavor King is not as fast growing as others, for instance.

When and where to buy pluot trees

Also in common with other deciduous fruit trees, the best time to buy and plant a pluot is in the winter when you can buy them bare root. Good nurseries get bare-root fruit trees in usually just after Christmas. (See my post, “Bare root season is here!”)

Some nurseries put their bare-root fruit trees into containers instead of selling them bare root, unfortunately. Nevertheless, winter is the best time for buying and planting a pluot — bare root or not.

Now, fall, is the time to decide whether a pluot tree is right for your yard. If it is, beware: I started with one and now have four, and may need more.

Messages from your deciduous fruit trees after the chilly winter

Fruit tree varieties for a year-round harvest in Southern California