Fruit trees can bloom after stress 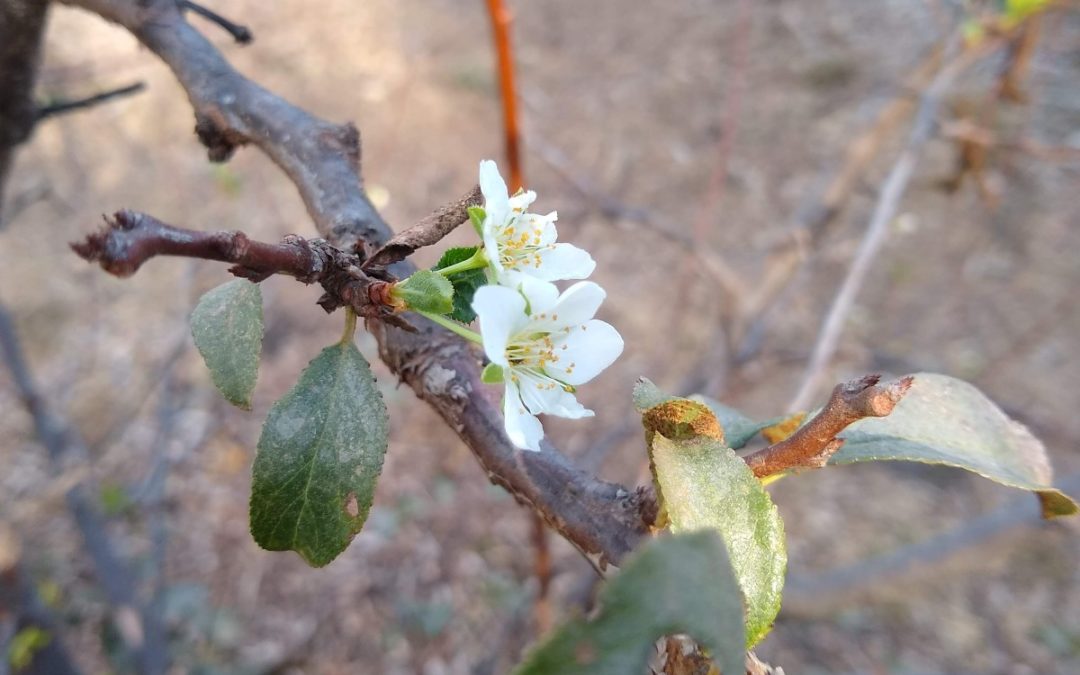 Aren’t fruit trees supposed to bloom in spring? Then why do some of mine have flowers here in October?

My pluot trees have a few flowers (those on Flavor King pictured above). Also with a few flowers are my Pink Lady apple, Fan-stil pear, and Blenheim apricot.

Why the off-season bloom?

Apparently, a period of high heat or lack of water can cause this. This past September and early October we had lots of heat, you’ll remember. On September 5 and 6, my yard reached 115 and 114 degrees. There were a few days over 100 again in the middle of September. Then at the end of the month there were eight consecutive days of 100 degrees or higher from September 28 through October 5. What an end to summer!

It was in early October that I noticed the first flowers opening on the Pink Lady apple tree. Then I looked around and noticed blossoms on the others as well.

(Side note: Some apple varieties that we grow in Southern California, such as Anna, commonly have multiple blooms throughout the year. I haven’t noticed that these blooms are clearly related to heat or water stress.)

High heat or lack of water?

Was it high heat that caused the off bloom, or was it insufficient watering during the high heat? I don’t know.

Stress from lack of water has been shown to cause a bloom on many citrus trees once the stress is relieved. (See this paper, for example.) And I’ve experienced this myself.

Back in 2013, I moved into my current house and the yard had a mandarin tree. It was July, but the tree hadn’t been irrigated all spring and early summer. I watered it and it immediately responded with new leaf growth and a profusion of flowers, in the middle of summer.

On the other hand, none of my citrus trees have flowers right now (except a lime, which has a flower or two almost every day of the year). But I watered my citrus trees abundantly through the end of this summer, much more in volume and frequency compared to my stones and pomes that are now having the off bloom.

Maybe the citrus aren’t blooming because they didn’t experience as much stress during the heat since they had more water given to them. I have to confess that I probably underwatered my stone and pome fruit trees this summer, as judged by how they look today (not so good).

Will I get off-season fruit?

For the trees with flowers, what will happen next? Will I get some off-season apples, pluots, apricots, and pears? I don’t expect so since the flowers are few and some, such as the pluots, need cross pollination.

Further, in The Home Orchard it is written: “A fall bloom does not result in fruit or nut production.”

But I can say it’s certain for my blueberries. A couple of them bloomed after the heat too, and the berries rapidly grew and are soon to turn color. I just may garnish something with a couple fresh blueberries from the yard this Thanksgiving.