Effects of a warm and wacky winter on deciduous fruit trees 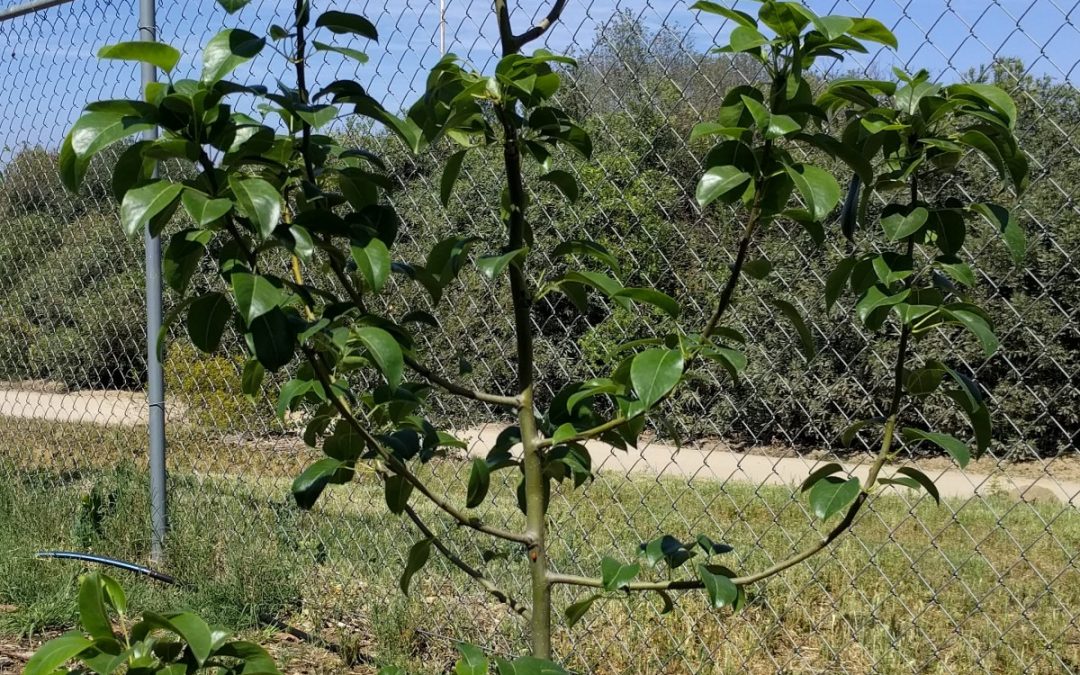 Are your deciduous fruit trees acting funny this spring too? Frightfully funny? Look at a couple of my trees today compared to this time last year, and then let’s explore why they’re behaving this way. Finally, is there anything to do about it?

Bloom is a full month later

The most obvious display of my deciduous fruit trees this spring is the delay in their flowering. You might think that they’d flower earlier since the winter was so much warmer than normal and the spring has been warm so far. That has been the case for citrus and avocados. But deciduous fruit trees have reacted in the opposite direction by flowering approximately a full month later than previous years.

I took the photo below of my Red Baron peach tree on March 25 of last year. 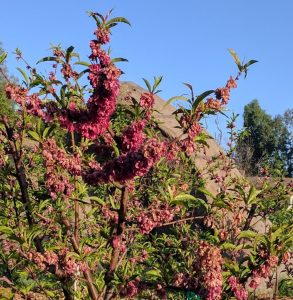 Note that the flowers are starting to dry out, just past their peak bloom. That is about the same stage as they are today, a year plus a month later. Below is the same tree here on April 25, 2018.

A delay of a month is quite a delay! And the Red Baron is not alone. All of my deciduous fruit trees are on the late side, most being nearly a month late.

(Have you noticed this with your trees? I may not have, but I take these photos that I can refer to, and I also keep detailed and dated notes on my trees — as well as the trees of my friends and relatives, many of which I’ve noticed are also similarly late this spring.)

Bloom and leaf growth are erratic

Not only did my Blenheim apricot bloom later this year than in previous years, but its flowering and leaf growth have been erratic and protracted. Here it was last year on March 25 (same date as the Red Baron peach photo was taken): 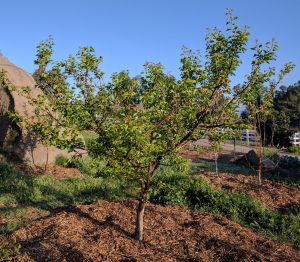 As usual, it bloomed heavily in a concentrated period, and then it flushed leaves and branches profusely, as shown in this photo. 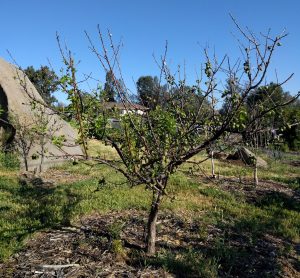 Looks skeletal, right? If you click to enlarge the photo, you’ll be able to see that the tree has gumball-sized fruit, which were set during its late and lighter-than-usual bloom back in mid-March. And you’ll also see that it is still spitting out a few flowers today. Also today, it is fitfully flushing new leaves.

What’s the cause? Warm

It seems that this disorderly conduct is due to the warm and wacky winter weather of 2017-2018. You’ll recall that it didn’t rain until January 9. It was the driest start to our winter rainy season (or “the water year,” as authorities call it) since the winter of 1870-1871. As can be expected, such unstormy weather coincided with warm temperatures, 2 to 6 degrees warmer than average throughout Southern California. (See this recent video made by the National Weather Service about the warm and wacky winter, from which I pulled these numbers.) Even long after that rain in January passed, the air temperature continued to feel like fall or spring, not winter.

What’s the cause? Wacky

That was the warm. Yet most deciduous fruit trees need a certain amount of cold each winter in order to grow as we expect. I quote the experts at UC Davis: “If the buds do not receive sufficient chilling temperatures during winter to completely release dormancy, trees may develop physiological symptoms such as delayed and extended bloom, delayed foliation, reduced fruit set and reduced fruit quality.” Sounds very familiar.

If you have a deciduous fruit tree that has never bloomed heavily and set much fruit nor grown many leaves in the early spring, it may be that it is suited to a climate colder than your yard. The amount of cold that each particular tree needs is usually measured in terms of “chill hours,” which are defined as hours under 45 degrees. For example, a Blenheim apricot tree is said by Dave Wilson Nursery, the company that grew my particular tree, to require 500 chill hours.

Well, despite the winter having been warmer than average, my yard still received around 700 chill hours this winter. True. I’m in a location that gets colder than much of Southern California, which only got a couple hundred chill hours this winter, max.(Check for your yard’s approximate chill hours by locating the nearest weather station at this UC Davis webpage.)

So what gives? First, it’s not accurate to say a tree needs X hours under 45 degrees, obviously. In fact, no one says this. There are caveats. For example, Dave Wilson Nursery has an article about chilling requirements of deciduous fruit trees, in which it notes, “Chilling temperatures are most effective in early dormancy.” In other words, it’s not just about how many hours of cold your yard gets but also in which part of winter the cold arrives.

Do you remember that there was no sense of winter in the air until the calendar was about to flip to spring, at which point we got the crazy cold snap of late February (see my post, “The Sucker Frost”), which extended into a chilly beginning to March? That late cold spell technically added many chill hours, but apparently, getting chill hours that late in winter is useless, ineffective. It’s just wacky, and it doesn’t count.

There are experts who study chill requirements for deciduous fruit trees, and there are a couple of competing methods for calculating requirements. One factor that some add into the equation is how many hours there are over 60 degrees. Any time over 60 degrees counts as a negative to accumulating chill hours. Applying this to our last winter, even though we may have had a number of hours under 45 degrees, we had so many days above 60 degrees that our chill hours were constantly being negated. (See this page from UC Davis to read more about chilling hours.)

Anyway, even the experts don’t seem to be able to create a calculation method that completely predicts how a deciduous fruit tree will react to a warm and wacky winter such as the one we just lived through. Ben Faber, University of California Cooperative Extension Farm Advisor in Ventura and Santa Barbara Counties, said as much in one of his recent blog posts: “None of [the various methods of calculating chilling hours] seem adequate though for describing what is happening in the landscape today in Southern California.”

That’s not hopeful. What do we do now? Do we still plant trees that require the number of chill hours that approximates the number our yard receives? I’d say yes because it’s still the best method we have for planting a tree that will perform well in our yard, except the more accurate method of planting the kind of tree that you’ve already seen doing well in a neighbor’s yard. Also, I’d refer to the recommendations of the Sunset Western Garden Book. They’ve all been accurate in my experience.

Moreover, let us remember the warning of Aristotle that one swallow does not a summer make. Last winter was warm and dry. Two winters ago was very wet. Nobody knows what’s in store next year.

As for those trees we have in our yards now, we need to remember that their fruit will likely be ready to harvest at a different time than in previous years, maybe up to a month different. Might my Red Baron peaches that are usually ready in July not be ready until August? I’ll have to keep watch.

Yes indeed, the Red Baron peaches are only now ready for harvest, a month behind schedule: 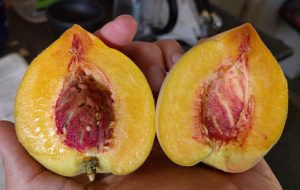 All of my other deciduous fruit trees have been similarly late. While the quality of my Red Baron peaches is good, some others have had poor quality fruit, for example, my Snow Queen nectarine. Most of the crop was very small, some fruit having no seeds even.

The amount of fruit set on many trees was low. Dapple Dandy pluot, Flavor King pluot, and SpiceZee nectaplum all had little to no fruit this summer. But others set plenty of fruit: Burgundy plum, Flavor Grenade pluot, Pink Lady and Fuji apples, and Blenheim apricot (despite the erratic bloom, as seen above).

A warm and wacky winter made for disappointing deciduous fruit eating this summer, but now I turn to hoping for a normal winter to come.

Your fruit tree is grafted — Why? And so what?