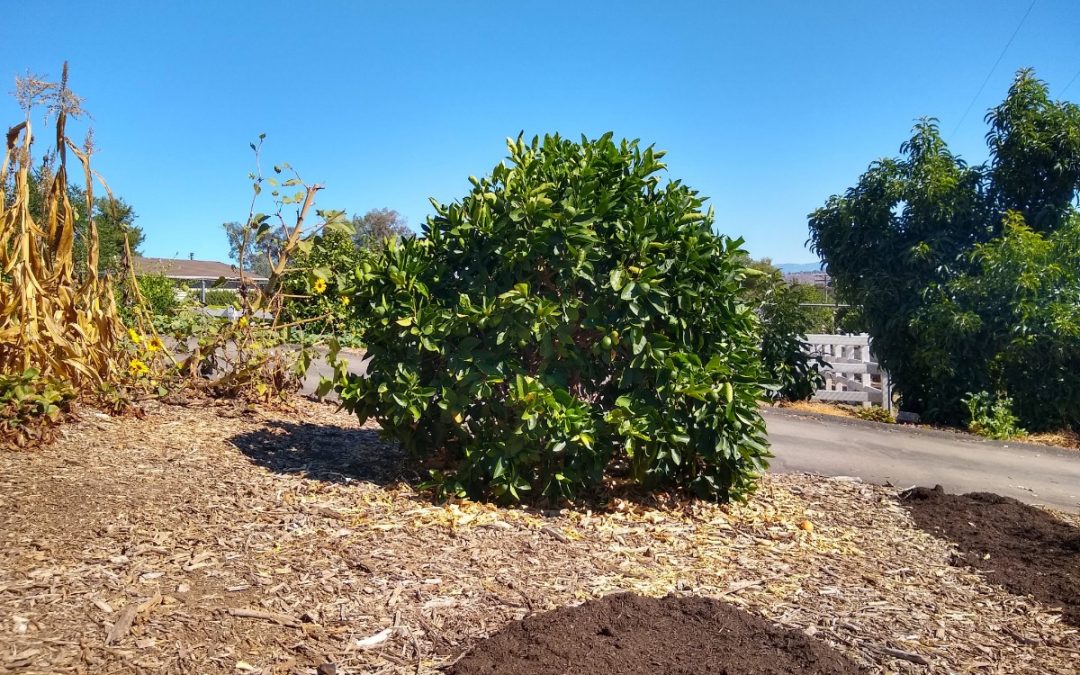 I haven’t watered this lime tree for three years now and yet it still gives us more limes than we can handle — and limes of high quality.

I don’t know for certain why it no longer needs my irrigation, but I have a suspicion. Step back and take a look at the tree’s surroundings.

This lime tree is likely drinking from the driplines that are irrigating the vegetable beds that surround it. I suspected this the last couple summers, but I am surer of it now because — as you’ll notice in the photo — I have not watered two of the three vegetable beds near the lime tree at all this summer and the one on the left has had the water turned off for the past few weeks.

Coincidentally, the lime tree has looked slightly thirsty lately, especially on days near 100 degrees. In contrast, I never saw it show thirst over the past two summers, and all of the vegetable beds were irrigated then.

Why did I stop watering that lime tree in the first place? It was giving us more limes than we could use, and I’ve always wanted to find the point of maximum watering efficiency in my yard.

No water at all would be quite efficient if I still got a crop, right? But I wasn’t aiming for that. I was just going to wait and see when the lime tree looked thirsty. I would water it then. I waited, watched, waited, but it never showed thirst.

This summer I explored not watering some other fruit trees as well as some vegetables. One of the most interesting discoveries was with some unirrigated strawberry plants.

It was a patch that I’d planted two winters ago but abandoned last summer. I removed the driplines and covered the area with wood chips and forgot all about it.

Then this winter I noticed that some of the plants had come back to life and then in the spring they started bearing strawberries. I tried a few one day, I tried a few more, and I quickly realized that they were better than the ones I was watering, far better.

The berries were small, not much bigger than alpine strawberries but squat in shape. They were ugly, really. But the texture was exceptionally firm. The irrigated strawberries were mushy in comparison.

Moreover, the firm texture held a flavor that was concentrated and rich. It made the other strawberries taste watery. These were the best-tasting strawberries I’d ever had.

I never watered the plants but they kept producing all the way into July. They now look ragged, but they’re still alive.

I plan to keep them alive, which might require watering a bit, and expand the number of strawberry plants that I don’t irrigate for next year. This year’s unirrigated strawberry plants were mulched with wood chips so I’ll apply mulch on the next ones too, and then if they produce in the spring, I’ll possibly, just possibly, show the kids where they are.

In May, I planted three tomato seedlings in spots where there was a thick layer of wood chips that had soaked up the winter rain and protected the moisture in the soil below from evaporating, but where there was no irrigation. I wondered if these tomato plants could grow and produce here without any watering. I did give each tomato plant a half-gallon of water upon planting but have not given them a drop in the months since.

Here in mid-August the plants look, well, not terrible. Here is one:

All of the plants have fruit, some of which are nearly full-sized now and close to coloring up:

These tomatoes are the Momotaro variety. I eagerly await tasting one. Will the flavor also be concentrated and rich like the unirrigated strawberries?

(Update: The tomatoes tasted exactly like my Momotaros grown with irrigation. I detected no richer flavor.)

Either way, it’s clear that tomato plants can be grown from residual winter soil moisture conserved by mulch even in a hot inland part of Southern California. The plants’ fruit are fewer and maturing later than my irrigated garden tomatoes, but what fruit there is is essentially free and wild.

For another try next year I’d like to plant them earlier, like in March rather than May, so that they grow more foliage and set some fruit before it heats up.

There is an old peach tree in my yard that looks like a young peach bush.

This peach bush is actually a mass of rootstock suckers, ten of which I have grafted to various peach and nectarine varieties. The peach bush was growing here when we moved in six summers ago, and I don’t water it.

At first I didn’t water it because I didn’t want it. What use do I have for this rootstock peach fruit?

Once I grafted onto it and started caring about the tree I thought about watering it, but it never seems to need it. Why not?

Like with my lime, this peach is probably drinking from irrigated plants in the vicinity. For the past five years there has been an avocado tree that I’m watering about fifteen feet away. And starting this year, I have watered a Bee Garden full of flowers nearby.

A lesson here is that we should experiment with watering fruit trees less if they are old — say, more than five years old — and are growing near other irrigated plants.

Further, I suspect that something else is helping both my lime and this peach tree remain healthy and productive even though they never get dedicated irrigation: Both trees have developed their root systems for many years, and yet I keep pruning them and not allowing their leaves and branches to grow big. They have big engines underground that only need to support small trees above ground. That’s how I imagine it anyway.

If this is accurate then I think I should try reducing summer irrigation to other fruit trees that are older and that are pruned yearly.

What is important in these experiments is that the harvest is often very good despite the lack of watering. One variety of peach that I grafted onto the unirrigated peach bush is a donut-type called Galaxy. There were a lot of these peaches on the tree earlier this summer and they are now one of my favorite varieties.

And what did I give the tree to deserve such a gift?

How much to water a fruit tree in Southern California, roughly