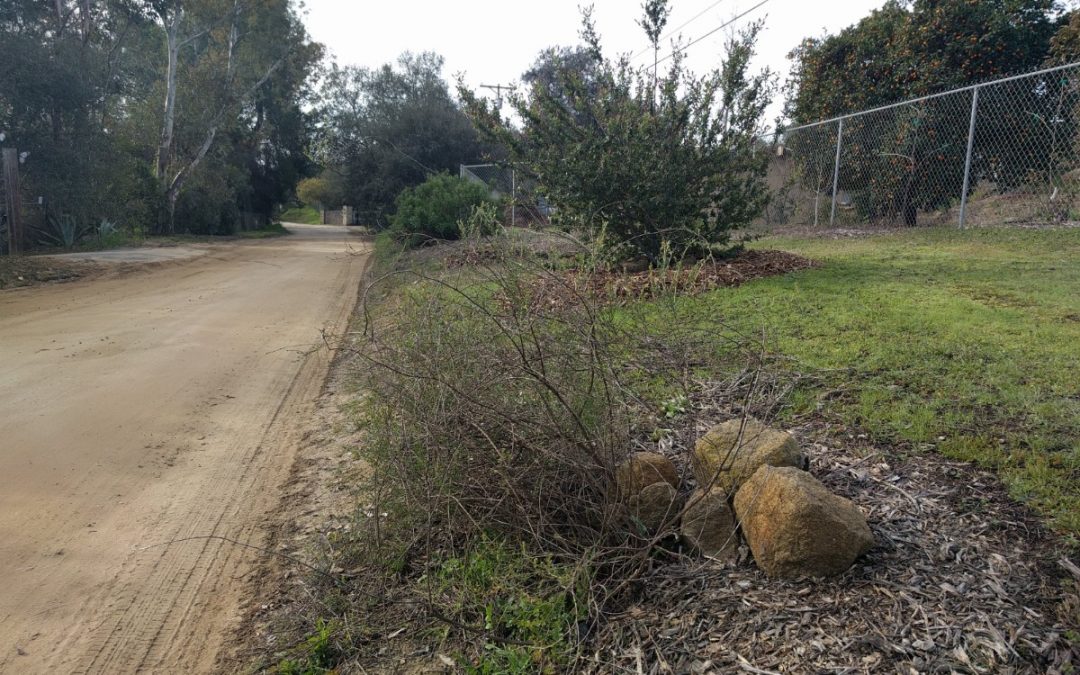 I was walking with a friend through his fruit tree orchard a couple weeks ago when he knelt down to pull up a weed.

“These things are everywhere. What is it?”

“It’s called deerweed. It’s a native plant. It has little yellow and orange flowers all over. It’s really pretty and the bees and butterflies like it.”

In my yard, I cultivate deerweed. I protect it, I encourage it.

See that photo at the top? That’s an unattractive deerweed in the foreground. Looks like a dead bush, I know, but come spring it will be beautiful.

Here’s a photo of some new leaf growth on another deerweed in my yard:

When I moved into my house six years ago, half the yard was native plants with weeds and the other half was pure weeds. Some weeds I knew, like tumbleweed. I quickly set to eradicating that. But others I couldn’t identify. One such plant I came to know was deerweed, and once I learned its name I was able to learn all kinds of things about it.

Deerweed’s botanical name is Acmispon glaber or Lotus scoparius, and one of its interesting characteristics is that it’s a nitrogen fixer. What’s that? Some plants have the ability to take the nitrogen that is floating around in the air and change its chemical composition (“fix” the nitrogen) so that the plant can take it into its roots. In actual fact, the plant doesn’t do this on its own. There are bacteria that live in the soil that do the nitrogen fixing, and they live attached to the plant’s roots. The bacteria fix the nitrogen, feed it to the plant’s roots, and the plant in return feeds carbohydrates back to the bacteria. Fascinating stuff!

Most plants are incapable of having this relationship with nitrogen-fixing types of bacteria, but deerweed is one of the few. (Peas, alder trees, and clover are a few of the others.)

What is a weed, precisely?

What is a weed? To most of us, a weed is simply the label we give to a plant that is growing where we don’t want it. The concept is entirely subjective — that is, my friend thought deerweed was a weed, but I didn’t.

Weeds are not equally undesirable. I have a lot of weeds in my yard. Some of them I loathe (ripgut brome), and some of them I mildly dislike (whitestem filaree — bees do love its flowers, and it’s fun to make scissors out of its seedheads, but its corkscrew seeds stick to everything).

Wherever the native vegetation has been removed, weeds will fill in. Count on it. The earth demands that its soil surface be covered. Weeds provide this covering, and we have the opportunity to encourage or discourage whichever weeds show up.

Sometimes before pulling a weed in the garden, we should take the time to learn its name.

It’s impractical to do this every time, all the time, but over time if you learn the names of the weeds in your yard you then gain access to the information that others have gathered about them for a thousand years, and not only will you learn to manage them better but you will also declassify some as “weeds”.

Weed scientists think of weeds differently. They classify plants as weeds if the plants are very competitive and are hard to control in a landscape. So while my friend thought deerweed was a weed, no weed scientist would define it so because deerweed is neither very competitive nor hard to control. In my own yard, I’ve lost deerweed plants to actual grass weeds because the grass weeds grow very fast and produce prodigious amounts of seed; they overtake the deerweed within a year or two.

I’ve got a new weed in my yard this year. It’s not totally new, but I’m seeing much more of it this year than in years past, and up until the other day I hadn’t learned its name.

How do you learn the name of a weed? One method is to use the University of California’s Weed Gallery. I took the above photo, and then I went to the Weed Gallery website and began searching.

If you use the weed gallery, you should search by using as many identifying characteristics as you can. You might have to follow many trails before finding your plant.

I looked at my photo again. Then I backed up and clicked on “lobed edges”. The plant does have lobed edges. Voila! Henbit, or Lamium amplexicaule. I have the name!

Before I went further and learned about how henbit reproduces itself, what its seedlings look like, etc., I already knew I wasn’t going to immediately remove it because while I was taking the photo of this henbit I had noticed something hanging on the lip of one of its flowers. I moved closer to get a better look. I couldn’t believe my eyes. That’s a Ceratina species!

It crawled inside the henbit flower, then it backed out. Yes, that’s a small carpenter bee, a native bee!

I hadn’t seen a single native bee in my yard yet this year, and then to see a small carpenter bee . . . on a weed. Hmmm.

Sure makes me think twice about killing the henbit, at least until the non-weeds are in bloom.