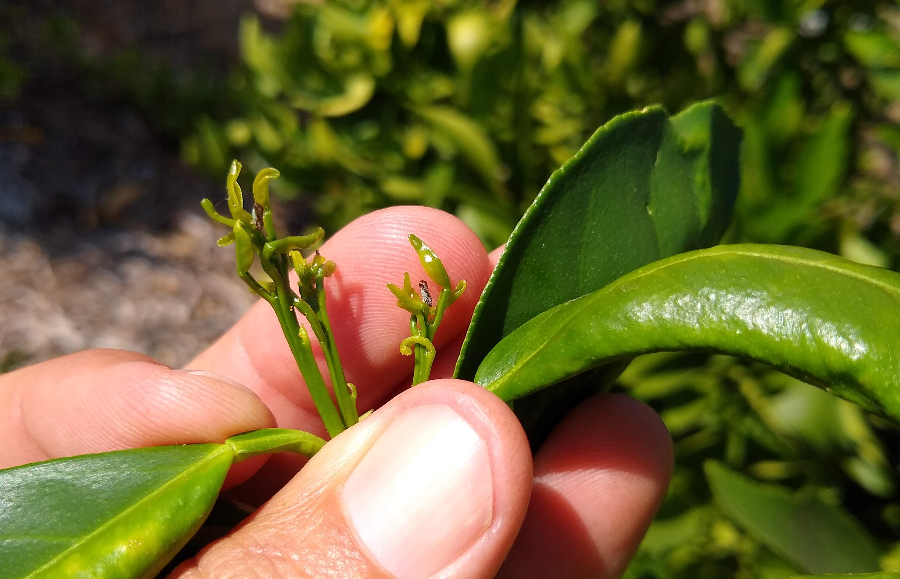 Yesterday, I attended a citrus pest management field day at Rancho Guejito put on by the University of California. The focus was on the disease Huanglongbing (HLB) and ants. I’ve attended many similar lectures and research updates on these topics over the past decade, but this one was different. For one, it was meant for citrus farmers instead of gardeners. But most importantly, the tone of the speakers had changed.

I thought you might enjoy and benefit from my relating just a few highlights.

“I’m an epidemiologist . . . but personally, I’d be more worried about water than HLB if I were growing citrus in California,” said Neil McRoberts, Associate Professor of Plant Pathology at UC Davis. This was the first change in tone that I’d heard from a UC researcher on this subject in ten years.

Until yesterday, all I had heard from them or the California Department of Food and Agriculture was the impending doom, the total destruction that HLB was soon going to cause to all of California’s citrus trees. (Their public service announcement is titled, “What if California Citrus Disappeared?”)

Why the optimism (about HLB, not water) from McRoberts?

Pause. Do you know what HLB is? It’s a disease said to be caused by bacteria and which ultimately kills citrus trees. There’s no known cure. HLB has been found in some citrus trees in Southern California in a few locations. (You can learn more about it at the Citrus Threat website.)

HLB has caused a lot of damage to citrus trees in Florida. When it was first detected in a tree in California in 2012, it was feared that it would spread and cause similar damage. It has not.

Why the optimism? He’s learned that the bacteria (Candidatus Liberibacter asiaticus, or CLas for short) that is believed to cause the disease as well as the insect that carries the disease from tree to tree find it harder to live in California than in Florida. McRoberts said that he can see after ten years of observation and testing that both the bacteria and the insect are not proliferating here as they do in Florida, and he thinks it’s mainly due to climate. California’s colder winters and hotter summers slow down the reproduction of the insects and sometimes kill them.

The insect that carries the bacteria from tree to tree is called the Asian citrus psyllid or ACP for short. (In the photo above, some ACP are on the leaves of a citrus tree in my yard.) It is the great enemy, for it vectors the disease-causing bacteria. I remember attending a lecture back in 2018 where a UC researcher recommended regularly spraying all citrus trees with insecticides to kill ACP or else putting them under a net structure to exclude the insects.

But Mark Hoddle, Entomology and Extension Specialist at UC Riverside, presented at yesterday’s field day about his work on “biocontrol.” That means he tried to find other insects that might eat the ACP. He travelled to Pakistan and brought back a wasp that ate ACP there. He released those wasps, called Tamarixia radiata, here in California in 2011.

He found that the wasps did eat the ACP (directly and through parasitizing them): success. But more recently he has found that other insects that we already have here in California also eat ACP. Hoverflies and lacewings eat many ACP, he found. Specifically, it is the larval forms of these insects that eat the nymph forms of the ACP, and they do so at night.

How to have these natural enemies working near your citrus trees? “Put out some flowers and they will come,” he said. He’s found that allysum is an especially attractive flower for hoverflies. (I’ll add that I’ve found that cilantro is loved by hoverflies.)

See photos and read details about the biocontrol of ACP in Hoddle’s recent article for the Topics in Subtropics newsletter, “Natural enemies have significantly suppressed Asian citrus psyllid populations in
southern California.”

Hoverflies and lacewings and Tamarixia wasps have a hard time eating ACP however, if there are a lot of ants around. Specifically, we’re talking about Argentine ants, the little black ones that invade your house in the summer and your garden too. They are said to have arrived in California from Argentina around 1907, and they have a special relationship with ACP and other insects that feed on citrus leaves such as mealybugs (photos and details here).

Ivan Milosavljevic, a Project Scientist in the Hoddle Laboratory at UC Riverside, presented at the field day about ant control and the ants’ relationship with ACP. The ACP suck the sap from citrus leaves, which is sweet. They don’t digest all the sweet sap so they poop some out. This sugary excretion is called honeydew, and it is food for the ants. The ants eat the honeydew, and they also protect the ACP. They’re protecting their food.

But how to get rid of the ants? I asked Milosavljevic if there are any natural enemies of Argentine ants. How convenient if we could bring in some insect or animal that feeds on ants, or maybe we already have one in California that we can promote. Alas, he didn’t know of any ant predators. We are left with only poisons at this time.

So the UCR researchers have been developing their own ant control method using hydrogel beads. These beads are made of algae and are soaked in sucrose (for bait) and a little poison. The hydrogel beads have been very effective so far, they say, and it appears that only the ants are attracted to them so they seem safe, and they’re cheap to make as well. They even biodegrade right there on the soil under a tree.

See photos and read details about the hydrogel beads in Milosavljevic’s article in the recent Topics in Subtropics newsletter, “Synergizing IPM of Argentine ant and biocontrol of sap sucking pests with
biodegradable hydrogels, infra-red sensors, and cover crops in commercial citrus
orchards.”

I left the field day hopeful overall about ACP and HLB and grateful for the work of these researchers. Natural enemies can control ACP, and HLB is turning out to be far less dangerous in California compared to Florida in part because of our climate — although McRoberts noted that this news shouldn’t make us complacent.

I like the innovation of using hydrogel beads to kill ants too. I might even experiment with making some in my garage, as there are no companies yet making them available for purchase.

However, poisoning the ants isn’t totally satisfactory for me, even if the poison is effective, cheap, and appears to be safe. Pesticides always lead to resistance and the need for more and new pesticides, and often, safety problems appear over time.

Earlier this year, chlorpyrifos, the pesticide that was sprayed on fields of citrus trees to kill ants for dozens of years was banned. Chlorpyrifos had long been linked to brain damage in children, among other maladies. (See the EPA announcement on the chlorpyrifos ban here.)

Ants are problematic for our citrus trees, but I’m hoping to attend a field day in the future where UC researchers announce that they’ve found an even better way of dealing with them.

Thank you for your support of The Yard Posts so I can keep them coming and never run ads! Here’s how to SUPPORT