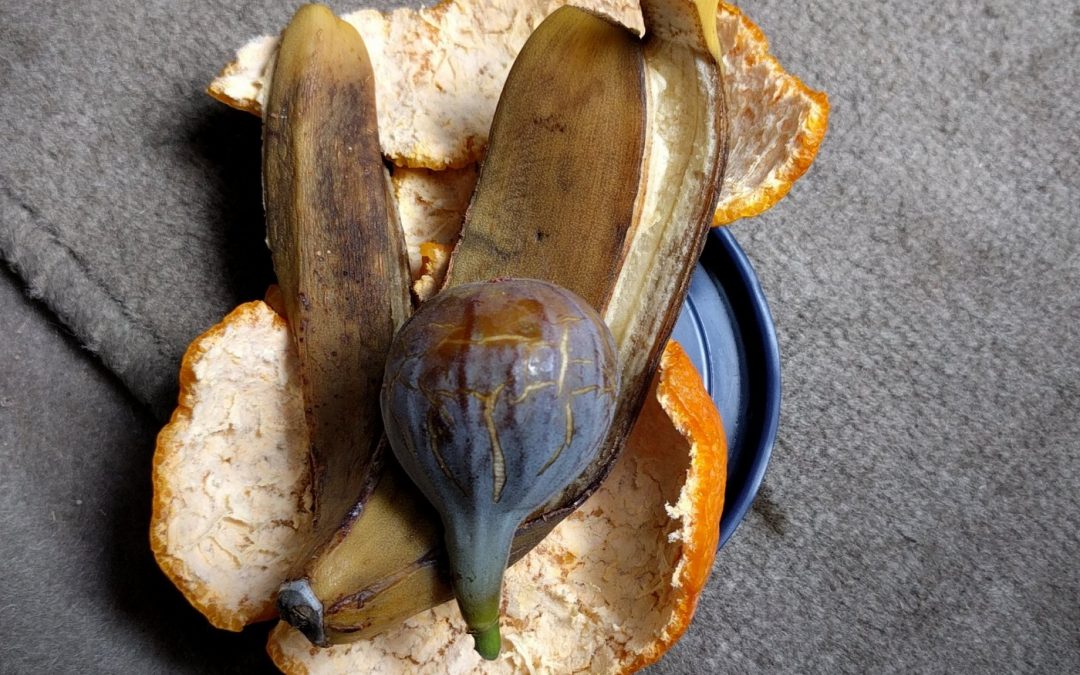 I took this picture of a banana peel and an orange rind because they made me realize how weird I am, how weird we are as food gardeners. The banana peel and orange rind were lying on the floor mat of my truck; I was taking them home with me. There was a trash can in spitting distance, but I’d decided to keep the peel and rind for compost. This is trash to most people, but . . .

Two days prior I’d been at my grandma’s house where we had a barbecue for my mom’s birthday and I went home with four bags of food waste — only I’d never asked for it. My grandma also grows vegetables and fruit trees. When I was young, she also had a coop full of chickens. She doesn’t compost much anymore because she generates very little food waste, but she knows the deal. She presented the corn husks, tomato stems, pineapple cuttings, etc. to me: “For your chickens.”

“Thanks, Grandma! I’ll turn them into eggs and bring you a few next time I visit.”

This summer has me down. A friend who gardens and lives nearby is also feeling low. We’re both in inland Southern California where July has been the worst July of all time, for food gardeners (and farmers). I talk to friends who live at the beach or friends who don’t garden and they act like nothing’s wrong. But we were despairing. Is 115 degrees going to be the new normal?

Our avocado trees are thrashed and browned. Much fruit has fallen to the ground. Our apples are burnt. And this comes after a warm and wacky winter that resulted in the worst fruit season for deciduous fruit trees that I’ve experienced.

Another friend who lives close to the beach and never experienced the 100-degree days that I did, did experience his apple, apricot, and nectarine trees barely growing leaves this spring and blooming flowers even more pathetically. He was so eager to share his Desert Delight nectarines with me this summer because he’s sure they’ll be the best I’ve ever tasted, but he doesn’t even have one fruit for himself.

We observe the weather, we food gardeners, we read the weather forecasts, we might even have our own weather station, and we think about the weather differently. Rain is not a nusaince to us. We’re quite willing to get our hair wet and our shoes muddy because we know what it does for our plants. More than welcome it, some of us even try to trap it and keep it in barrels. Others usher it down their driveways into the storm drains with nary a thought.

We notice that grapes in the grocery store are way bigger than natural.

We are impressed that farmworkers can pick corn on the cob at exactly the right time because we’ve messed that up in our gardens. Or how about picking watermelons from your garden at the right time?

Our water bill isn’t just an expense. Proper accounting has it partially deducted from our grocery bill.

We know that nectarine trees smell like nectarines even if they have no fruit on them.

The orange rind was actually a Gold Nugget mandarin rind. The Gold Nugget had come from a farmers market and I was blown away at how good they tasted, especially here at the very end of July. They were better than the Gold Nuggets from my own tree. I had to share this one with a friend who also grows many citrus trees.

We also shared the banana. My mom had grown this one. I peeled it and then broke the little cream-colored guy in half and, after chewing and thinking, we both agreed that it beat store-bought Cavendish types.

“I like that it’s small,” he said. “By the time I’m near the end of a store-bought banana, I just want it to be over with.”

“Totally! And the texture’s better too.”

“Yeah, it’s not just mushy. And there’s some complexity to the flavor.”

“I think I taste some apple.”

“Yeah,” he agreed. “If anyone overheard our conversation right now they’d think we were so pretentious.”

We explored that. We explored it for about thirty minutes. He hoped his children would someday appreciate that they were able to walk out of their house and pick snacks of trees in the yard. He wished cities would plant fruit trees in public instead of only ornamental or shade trees. Many take the same amount of water and maintenance. In California, our grocery stores should have very small produce sections because we should be growing so much in our yards. He told a story of his mom secretly picking oranges from her neighbor’s tree which hung over her fence only to later find out that the neighbor didn’t even know it was an orange tree.

I volleyed with a story of the pastor of my mom’s church who had a large Fuerte avocado tree in his yard, and when I asked him if I could pick a couple he said I could have as many as I wanted. “We don’t eat them. My wife still just buys avocados at the grocery store,” he’d said.

But my friend and I wouldn’t always have been shocked by these stories. We may be food gardeners now, but in the past we’d been somewhat unaware too, about where food comes from, how to grow it, and even how to eat it. He said that the first time he grew zucchini he wasn’t sure what he needed to do after picking one in order to sanitize it to make it safe to eat. That’s what you grow up thinking when you buy food from a grocery store: Produce needs to be washed. You never ask why. 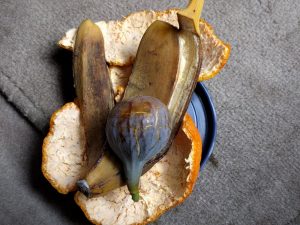 All of these ruminations had been sparked early that morning when my friend had announced: “You have to grow a Celestial fig.”

He had brought three from his tree for me to taste. We were in a beach parking lot because we were going to surf together, but before we could do that I had to go over to his car and taste. Each fig was at a slightly different stage of ripeness, my friend explained. He waxed about the variation in flavor that each would have.

He put the three in my hand and I ate the middle one, skin and all. I declared it delicious. It truly was delicious. But that wasn’t enough, of course. When you grow something, you get to know its nuances in a way you never had before, and it becomes your baby of which no one is prouder.

He talked about how he’d never really liked figs before growing his own, he got his knife out to cut the second one open so I could taste it without the skin — to get a more pure experience, he described the subtle change in skin color and how it indicates the flavor, he told me how he makes fig jam by scooping the pulp out and only adding a dash of cinnamon and it’s richer than any jam ever, he recounted how he checks his tree constantly but somehow a few had ripened rapidly and fallen to the ground without him noticing, he remembered how gophers and construction guys had nearly killed the tree in the past, and eventually I brought the third fig back to my truck. I’d eat it later, after we finally surfed, probably when I got home. Wow, my friend is . . . kind of nuts.

Oh, the mistakes I’ve made: Thinking flowers were for girls