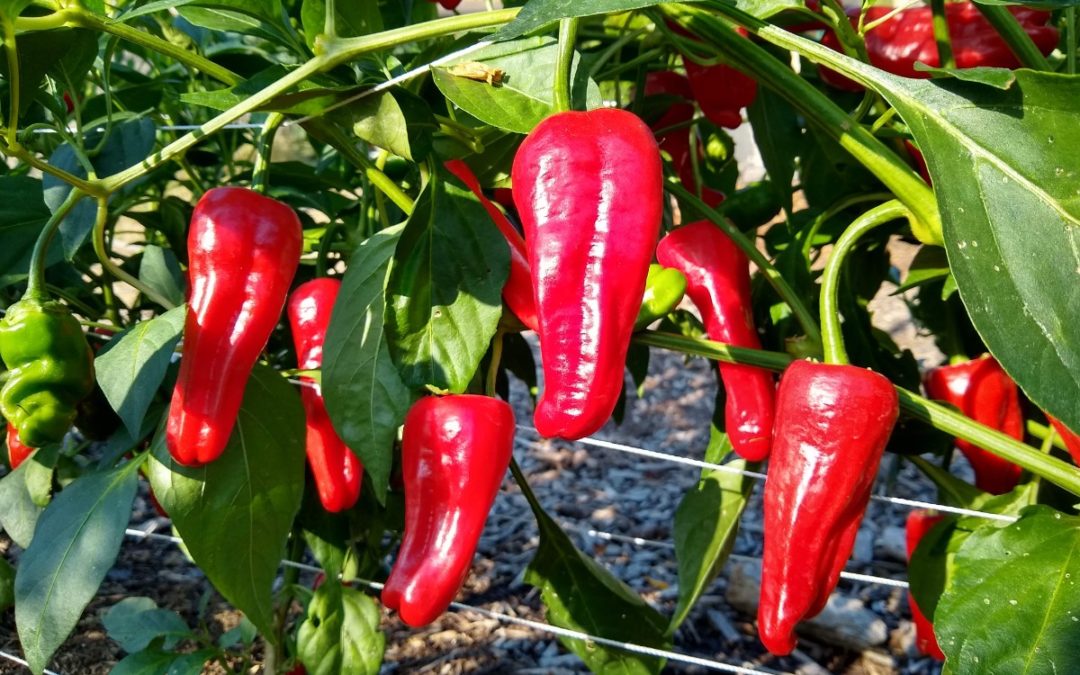 At the end of summer, peppers look better than anything else in my vegetable garden. Corn has been harvested and stalks are drying, tomatoes are getting brown leaves from the bottom up, but peppers remain verdant, and adorned by red, yellow, orange, brown, purple, even magenta fruit — they’re downright ornamental.

One reason that most other plants are worn out by the time that peppers are coming into their own is that peppers are best planted later than those other summer vegetables. In addition to talking about when to sow or plant peppers, I’ll get into a few details about varieties, pests, shading, and supporting peppers, specifically in Southern California.

But first, let’s talk about sowing or planting.

Last year, 2019, I sowed pepper seeds in trays in my garage on February 13. I planted them in the garden on June 2, shown here:

We began eating from these plants in the middle of summer.

That’s five months of caring for these plants before harvesting from them. Growing peppers from seed is a long process, especially if you don’t use heating mats or grow lights to get them started (I don’t).

So this year, 2020, I chose to grow my peppers from seedlings purchased from Territorial Seed Company in Oregon. The box of seedlings arrived on May 7:

I planted the seedlings on May 9 and we were eating from them starting in mid-summer. That’s only two months of caring for the plants before harvesting from them. It’s usually a wiser use of your time to start your peppers as seedlings rather than seeds. Usually.

If you do start from seed, then February or March are good times to start. And if you start from seedling plants, then May is the ideal pepper planting month.

Why is May a sweet spot for pepper planting? It’s the first month of the year that is warm enough to make peppers happy. This UC Davis publication says that the ideal growing temperatures for peppers are between 75 and 85 degrees, with nights between 50 and 60 degrees. Such temperatures are first reached in most of Southern California in May.

By the way, compared to tomatoes, peppers need it warmer to get started. If you observe when tomato seeds naturally sprout in a compost pile compared to pepper seeds, you’ll notice that the peppers always wait until later, when it is warmer.

Which types of peppers should you grow? We grow three main types, and they are chosen based on how we eat our peppers.

First, we must have a poblano type or an Anaheim so we can make “cheater” chile rellenos.

We cut out the stem and seeds, stick a bar of string cheese into the cavity, and put the stuffed peppers into the oven. These cheater chile rellenos we put inside burritos, eat alongside scrambled eggs, etc.

Second, we need peppers of medium heat to add to salsa. That’s where the Padron and Jalapenos come in.

Third, I use sweet peppers as substitutes for iceberg lettuce in sandwiches during the summer. In the past I’ve used banana peppers for this; this year, it’s mini bells. I slice them and put them into a sandwich to get that refreshing crunch.

This year, I’m also using the mini bells as substitutes for carrots. I dip them in hummus for a snack. Anyway, my recommendation is to grow the kinds of peppers that you can make use of. And there are so many kinds of peppers to make so many uses of: hot sauce, pickling, pan blistering . . .

Do you need to support your pepper plants? Sometimes. Often, the smaller-fruited types can stand on their own, holding a crop load without toppling. Here is a Serrano plant that I didn’t need to support a few years ago:

But this year I chose not to wait until plants leaned. I supported them with stakes and string from the beginning, a method similar to what is used with tomatoes. (My post on stringing up tomatoes.)

This not only keeps the pepper plants upright, but it also condenses the foliage around the fruit and helps prevent sunburn.

That vegetable gardener, Roy Wilburn, wards off sunburn on his bell peppers in two ways. One, he plants them in double rows, so they’re crowded and shading one another.

Two, he puts shade cloth over the plants if the temperature reaches over about 90. He uses 30 percent shade cloth draped over metal hoops.

I’ve been covering my peppers with 30 percent shade cloth on hot days, and it has worked. Sunburn is almost zero. A few fruit got a little scalded when it was 109 degrees one day.

You might wonder whether it would be effective to just plant the peppers in a location with light shade all the time, or shade for half the day. I’ve done that, and the peppers grow and produce and are less susceptible to sunburn, but they produce far less than when they’re in all day sun and only lightly shaded on hot days.

Close to the beach, where days are almost never over 90, sunburn is not a real concern.

I don’t find many pests or diseases to be a concern with peppers either, anywhere I’ve grown them in Southern California.

If you plant late enough, then the earwigs are no longer a problem. I do get aphids on my peppers, but frequent blasting with water keeps them in check.

As on tomatoes, the hornworm will feed on pepper foliage. But you can just pick them off, as my son is about to do here:

Earlier I mentioned that peppers are usually better started from seedlings rather than seeds because of how slowly they grow. Usually. Well, one reason to start some pepper plants from seed is because only through sowing seeds do you gain access to certain varieties.

Back in May of this year, a kind Yard Posts reader from South Africa (living in San Diego) mailed me seeds of the kind of pepper that is grown in that part of the world, sometimes called African Bird’s Eye pepper or Peri-peri. When I lived in Lesotho, these were the peppers that my neighbors helped me grow right by my front door. I added them to my dinners almost every night for years.

On May 17, I sowed the seeds that were mailed to me and got good germination. On July 23, I planted seedlings. Here is one of them today, just beginning to flower:

Peppers can be more than plants. They can be memories, connections, and full of hope. (Thank you, Joel!)

All of my Yard Posts can be found HERE