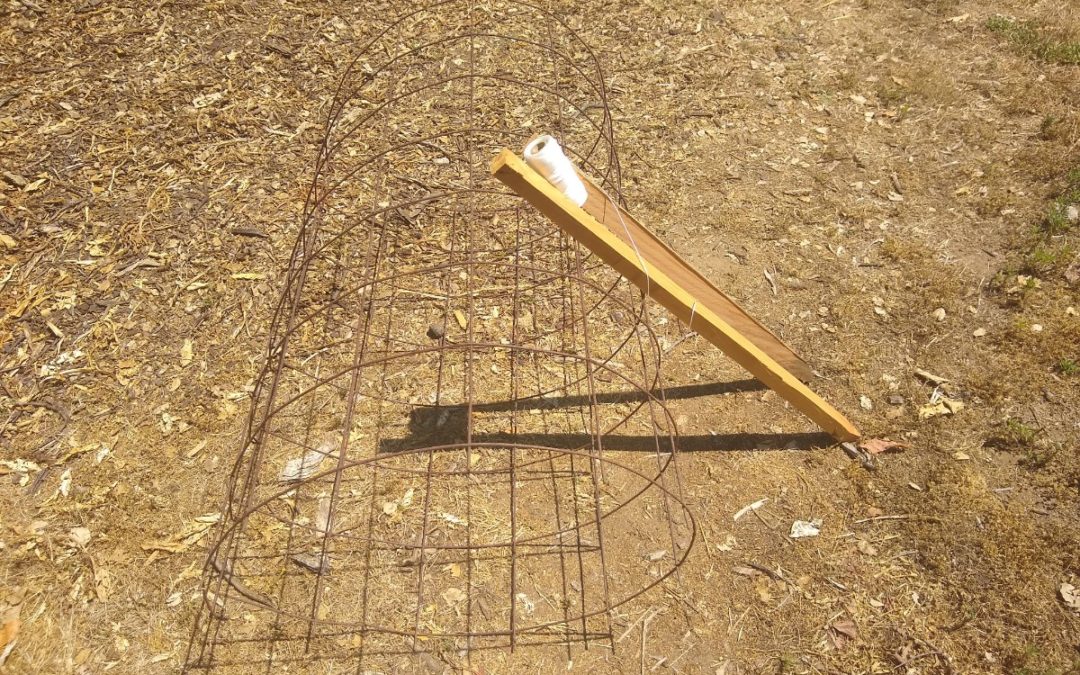 After joining Roy Wilburn to harvest tomatoes in his garden last June, which I wrote about in the post, “Learning from the California Gardener of the Year,” I was spurred to try his method of supporting tomato vines. Roy uses a specific style of stake-and-string support that goes by other names, or is at least very similar to methods with other names, including the basket weave and Florida weave.

In this method, you sink stakes between approximately every other plant down a row, and then you run string on either side of the plants in order to prop them up.

Many times in the past, I had used stakes and strings to support tomato vines, but I’d always used them to build wider, three-dimensional, stake-and-string cages.

This method is different. Here you are trying to string the tomato vines up into a vertical plane. You’re cinching the string tight and bunching the vines into a narrow, upright shape.

For some years, my standard method of supporting tomato plants has been with cages I made using concrete reinforcement wire. The cages are two feet in diameter, and they can be used on any type of tomato plant. For vigorous types like cherry tomatoes, I just use taller cages or stack one on top of the other as necessary.

This spring I planted two beds of tomatoes, and I supported one with stakes and strings, the other with cages.

Here on the verge of summer’s official start, I’ve started to harvest from both beds of tomatoes and can compare the support methods. Which is easier to build and maintain? Which provides for easier harvesting? Which will be easier to remove and store?

Unquestionably, the stake-and-string method takes more time and work to set up. Initially, you pound stakes into the ground, and then you must periodically run strings between the stakes to hold up the growing vines.

There’s also a bit of skill required to properly tie up the strings. Here’s a video that I’ve found useful, showing how this can be done fast and well.

Because the plants are propped up into a vertical hedge with the stake-and-string method, the growing tomatoes are more exposed to the sun so on hot days I’ve thrown a piece of 30-percent shade cloth over the plants to protect the fruit from sunscald. But also because the plants take the form of a hedge and expose their fruit, the tomatoes are extremely easy to harvest.

Not only are the ripening tomatoes hanging out for easy picking, but there’s not much foliage to cover them so as soon as they turn color they beam like beacons. I even spot tomatoes that are ready to be picked while still standing up at the house.

All is reversed with the cages. To install one, you simply place it over a tomato plant. Since my garden is on a slope I also add one more element though, which is to drive a stake into the uphill interior of the cage so it doesn’t fall over.

While there is no stringing and tying necessary, you do have to walk by the caged tomato plants every few days and push the vines back into the cages. They constantly try to escape and sprawl.

The real effort involved in using cages actually comes at harvest time. The tomatoes are only partly hanging on the outside of the cages.

Mostly they are inside, and sometimes they are deep inside such that you have to snake your hand through a tangle of aromatic stems to locate and pull out ripe tomatoes.

The benefit of this dense foliage surrounding most of the tomatoes is, however, that the fruit is better protected from intense sun. I’m in an inland, elevated location (Ramona, about 1,400 feet) where the days are hotter and the sun more powerful than some other parts of Southern California so I appreciate this, but I do understand that sunscald on tomatoes isn’t a concern for everybody.

When the caged tomato plants are done, it’s nice not to have strings to deal with. The cages can be lifted up and off the plants, often with the help of cutting some stems that have wrapped around them. With the staked and strung tomatoes, I know that I’ll have the extra step of clipping and pulling out a bunch of strings before being able to remove the stakes and old vines. I’ll also have those pieces of string to dispose of whereas the cages produce no trash.

The stakes will take less room to store than the cages though. I use these tomato cages to support other vegetable plants such as beans and peas, but I always have extras to store and they are bulky.

Right now, at early harvest time, I look at the tomato vines that I’ve supported with stakes and strings with kinder eyes than those in cages. But during the prior weeks of stringing up the vines, I was annoyed. It had been so much faster and easier to just plop down the cages. I questioned whether I should have bothered trying this stake-and-string hassle.

Today the payoff of convenient harvests, especially for my kids, has me thinking that the effort was worthwhile and as my skill at the stringing process improves, the method has the potential to become my new standard.

Wouldn’t this have been a better post to put up back in March, when we were planting our early tomatoes? Late June is a little late to plant — and therefore care about supporting — new tomatoes, no?

No. Late June is a perfect time to plant late tomatoes, or what I often think of as “fall tomatoes.” Often, those March-planted tomatoes fizzle out around August. But if you plant a few new plants now, near the summer solstice, you’ll be sure to have tomatoes to pick going deep into the fall.

(Here are reviews of the tomato varieties I grew last summer, in case you want to try any for fall production.)

More on cages and stake-and-string supports

“How to tie and stake tomato plants” by Brad Gates of Wild Boar Farms in Northern California is a video showing the stake-and-string method starting from the first stringing.

“Trellising and crop support systems for tomatoes” by Andrew Mefferd for Johnny’s Selected Seeds is an article describing the why and how of the stake-and-string method.

“The best way to support tomato plants” is a post I wrote that shows some more cages and links to a video about making the cages.

A list with links to all Yard Posts is HERE