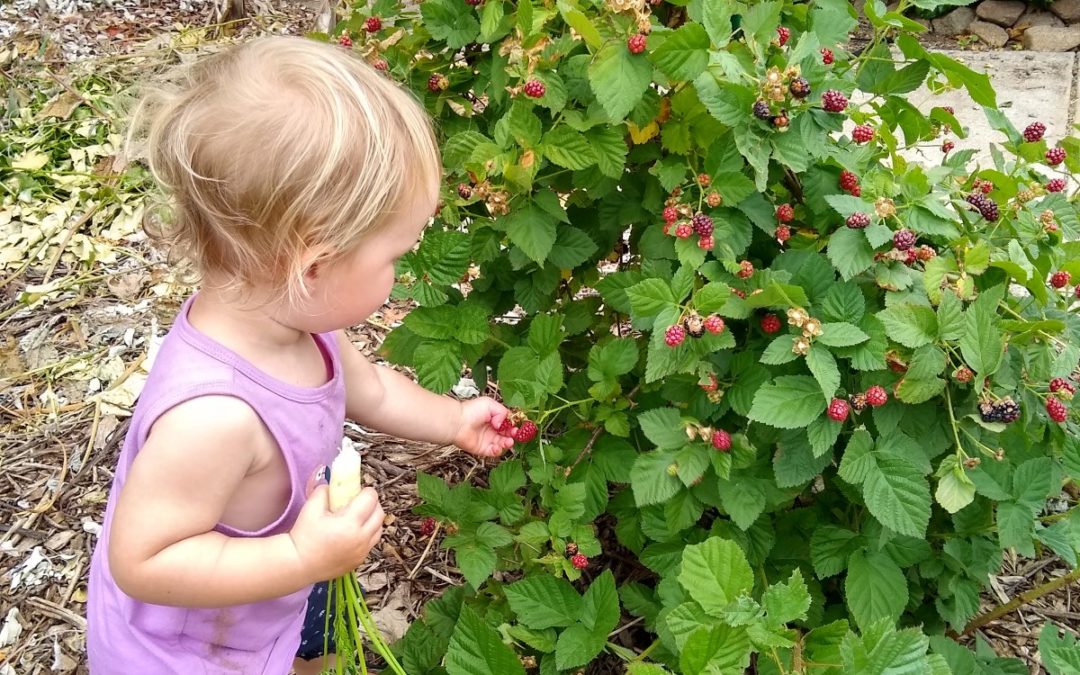 By tying the berry canes of a single plant onto a stake you make the bush’s footprint smaller — you can even grow it in a half wine barrel — and make the harvesting easier. And the maintenance time required for this style amounts to around an hour per year, in my experience.

I just did that maintenance on my boysenberry bush (boysenberries being a type of blackberry, in terms of growth habit) that I have been growing on a stake for the past few years. In this post, I’ll run through the process I followed and the reasons for each step. I also grow some raspberries on a stake so I’ll show what I do for them too.

One hour of maintenance per year

At this time of year (late September) cane berries look ragged. Here was my boysenberry bush a few days ago:

First, cut out those dead canes.

And then tie the new canes onto the stake.

When the canes are tied onto the stake, their berries are extremely easy to harvest. Not only are they up off the ground — as with any support structure — but they are also accessible from all sides. It’s like a column of berries.

Also, to an extent, you can adjust how high those berries are produced by tying the canes to a shorter or taller stake.

Here is how the bush looked at the start of harvest this June after having pruned and tied up the canes last year the same as I just did (note the new canes already growing out at the base for next year’s berry production):

And here is how the harvesting looked:

Raspberries on a stake

Here in the early fall, I cut out any dead canes — just like on the boysenberry — but I also cut back any dead ends of live canes. Raspberries, unlike most blackberries, flower and fruit a second time in the fall. Look for new growth emerging part way down the cane and cut back to there.

This isn’t necessary maintenance. The canes will make berries in the fall regardless of whether you cut off their dead ends. But I do it because it makes harvest easier when you remove those dead ends.

After the pruning, I pull up any shoots that have sprouted up outside the area I designated for this bush. Raspberries send up shoots from their roots so you have to put on a glove and pull these shoots out or else your bush will spread over a wider and wider area.

Finally, I retie the canes around the stake with jute twine so they stand more erect and are easier to harvest. Tying raspberries up is not as necessary as with many blackberry varieties because raspberries usually stand up well on their own. It still helps to make harvest easier though.

One more time in the late winter I go through the same quick maintenance procedure with these raspberries, where I cut out dead canes, pull up shoots that are out of bounds, and retie the canes as necessary. Total maintenance time for both the end of summer and late winter sessions is roughly an hour.

In June, just before harvest started, the plant looked like this:

That’s how I grow small blackberry and raspberry bushes on stakes. In fact, these bushes are maintained so small that I’ve realized that I can fit another plant in between them so this summer I planted a new raspberry of a different variety — that I will also keep small and make the harvest easy by tying up around a stake.

And all of my Yard Posts can be found HERE.