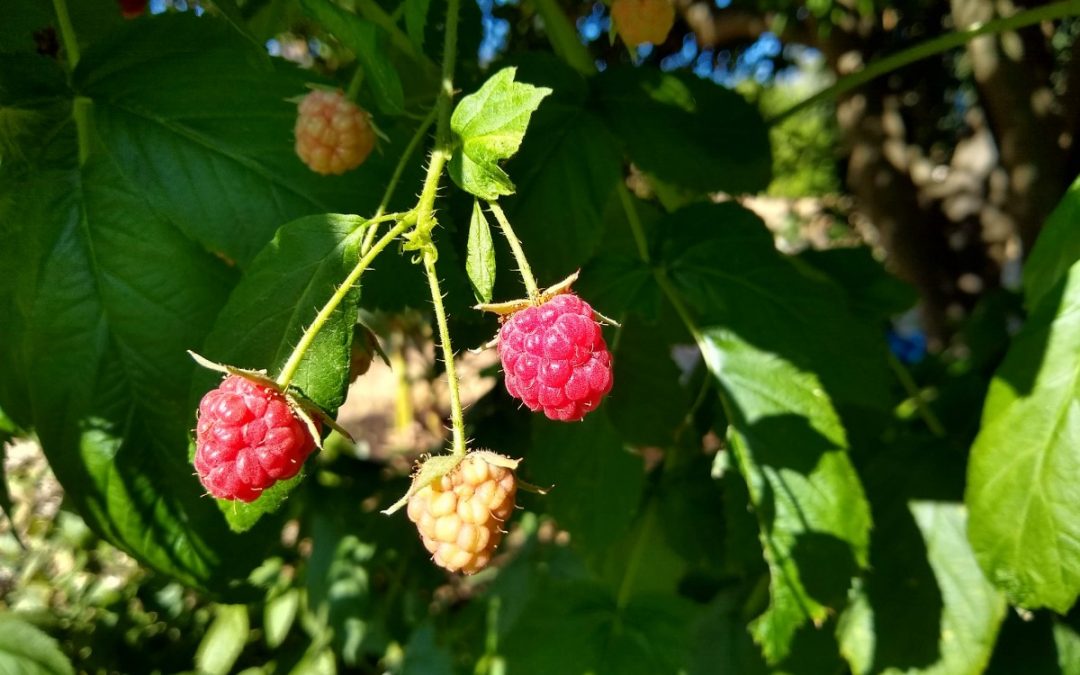 Most of my raspberry plants have come from friends and family who live where raspberries grow best. The Sunset Western Garden Book says that raspberries grow best in Zones 3-6 and 15-17. These Zones cover the central and northern California coast, and then western Oregon and Washington. In these climates the winter is cool and rainy, and the summer slowly warms up but never gets as hot or dry as down south.

During visits to Eugene and Corvallis and Salem and Vancouver, I always marvel at the flavor, texture, and production of the raspberry plants in their gardens. Some of them never even water their patches. At least that’s what they tell me, maybe just to rub it in.

The primary challenge of growing high-quality raspberries in Southern California is in emulating these climates where raspberries grow best. I’ve gotten better at doing that over the years, and my raspberries do better now. I hope I can help you and yours.

Blackberries grow wild in Southern California, and raspberries have similar needs to blackberries. (I read that there are also some native raspberries, but I’ve never seen them.) You’ll notice that wild blackberries down here are almost never growing in full sun, out in the open. Up north they do, but down here they often grow near creeks surrounded by many other plants, especially tall trees that provide some shade, or they grow at the canopy edge of a tall tree.

However, if you live away from the beach, your raspberries will suffer at times if they’re in full sun. My current garden is twenty miles from the ocean, and my attempts at raspberries in full sun always resulted in some mature berries getting scorched during high heat, particularly in June. I’ve seen the same occur in other inland gardens.

Therefore, if you’re more than a couple miles from the beach, give your raspberries a little shade — especially afternoon shade — in order to allow the berries to fully mature and develop their maximum flavor without being damaged by the heat. One of my neighbors grows her raspberries under shade cloth. I provide shade for my raspberries by imitating nature.

In my yard, I’ve found this to be a sweet spot: at the eastern edge of a large tree. The raspberry plants get full morning sun, and then filtered light the rest of the day. The foliage looks good, the canes fruit well, and the berries slowly develop their delicate texture and rich flavor, if I water well.

Near the beach, the main thing you need to do is make sure your raspberries are watered sufficiently. If you’re getting burned berries in a garden near the beach, it’s likely because you’re not watering enough.

Farther inland like me, you’ve got to give them some shade and plenty of water. Here is another of my raspberry patches:

It looks fine from afar, right? But have a closer look:

This sunburn was caused by a few 100-degree days, but it was exacerbated by my insufficient watering. What happened was that the dripline I set up to water the patch last year was sufficient then, but I let the patch expand this summer without also increasing the irrigation. Even if you find the right amount of shade for a raspberry plant in your yard, you can’t slack or be stingy with the water and expect the best berries.

The raspberry patch pictured before the video is, incidentally, a variety called Bababerry that is claimed to be heat tolerant. I have not found it significantly more heat tolerant than my other varieties, however. Bababerries need as much shade (and water) as the other varieties in my yard.

Which are my other varieties? No idea, sorry. As I said, they came from old patches in the yards of friends and family up north and I’ve never learned their variety names.

But I’ve never met a poor tasting raspberry, have you? Every variety that I’ve tried has tasted excellent. I’m inclined to believe that getting excellent raspberries from a garden in Southern California is mostly about growing them right and not about growing the right variety.

Actually, I have to qualify that. I’m not a big fan of golden raspberries. The only variety in my yard that I have removed was a golden raspberry because I found it insipid. It just tasted like sugar. I prefer raspberries that taste like raspberries. But I kind of regret removing those plants now because my kids really liked them. Maybe I should plant another golden raspberry.

The best time to plant raspberries is in winter. Then you can find them at nurseries in quantity and diversity and at the best prices, and the plants settle into their new home in your yard easily. Nevertheless, I’ve planted many raspberries at other times of the year successfully.

The enduring life in a raspberry plant is underground, unseen. The canes that arch beautifully above ground and make berries only live for a couple years, but the raspberry’s root system can sprout up new canes indefinitely.

One small raspberry plant will expand to a large patch within a couple years. As it expands, you can either rip out the shoots on the periphery in order to maintain the plant in a small area, or allow the patch to expand. Do remember — as I didn’t — to increase the water as the raspberry patch expands.

I keep my raspberry patches narrow enough such that I can easily reach berries on the interior. That ends up being no more than five feet wide. I maintain this width by periodically putting on a pair of gloves and ripping out shoots that sprout up outside of my invisible border or by mowing shoots that are out of bounds.

Most people provide some kind of structure to support their raspberry plants, which makes harvesting and pruning easier. A common structure entails two posts with a crossbar or two on each, and then wires running between the crossbars. See a drawing of such a trellis system here.

And see one such post and crossbar sticking out of the raspberry patch of my friends in Corvallis, Oregon here:

I don’t find the need for support structures for raspberries. The main downside of no support is that some canes will droop and some berries will touch the ground. (Varieties differ in how well they stand up or droop.)

If the canes droop, I just lift them up to pick, or to help others pick.

I do grow a single raspberry plant on a stake though. See details about that style in my post, “Growing small blackberry and raspberry bushes on stakes.”

Guidance on pruning raspberry plants can sound terribly complicated, with talk of primocanes and floricanes, and fall-bearing and ever-bearing cultivars, and tipping in the summer, and mowing in the winter, and on and on. I used to try to parse and apply such guidance but have since developed my own very simple but effective way of pruning my raspberries: Cut out anything that’s dead.

First, cut out any canes that are dead. How do you know they’re dead? They’re brown, both outside and inside.

Second, cut back any part of a cane that is dead. Sometimes canes die back only partly, not all the way to the ground. Cut back to wherever there is live, green growth. Don’t cut anything that is still green and alive.

I do this pruning in late summer (September) and again in winter.

That’s it. We get lots of berries throughout most of the year from our patches, and this is the only pruning method I use.

Even though we don’t live in the ideal raspberry-growing climate here in Southern California, I’m convinced that most of our yards can produce a fine raspberry crop. The keys are giving the plants plenty of water and not too much sun.