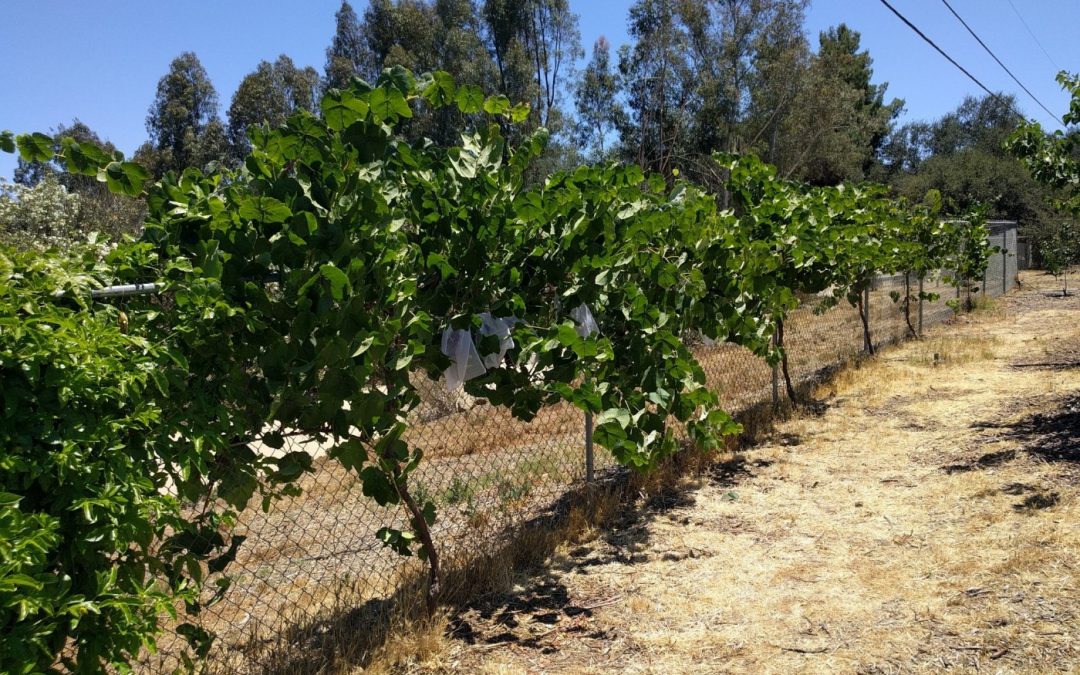 Five summers ago, we moved into a house that is fronted by 250 feet of blank chain link fence. I saw a grape canvas. And I started planting.

Now in 2018 I see that my vision had been a good one. We’ve got 13 vines growing and a few dozen feet of fence left uncovered. Chain link is an ideal support for grapevines.

And at this point I feel I’ve learned enough about how to best plant them, train them, and prune them that it’s time to share.

So here’s what I do. Plant the vines about six inches from the fence and not too close to the footing of a fence post, where you’ll run into its clump of concrete. And plant each vine at least eight feet apart; mine are at exactly eight.

The first year, let everything grow. No pruning. The canes and leaves that grow make energy (photosynthesize) for the roots, and the main goal in the first year is to get the plant big and established.

But sometime in the spring or early summer (if your grapevine is happy in its new home), you will have a couple feet of fresh, new green growth. Find the one cane that is strongest — thickest and longest — and tie it up the fence, straight up. I use the green tape that is sometimes called nursery tape. Tie every foot or so. 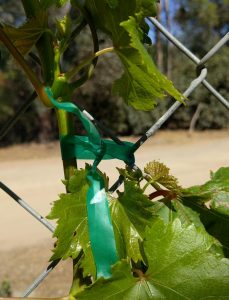 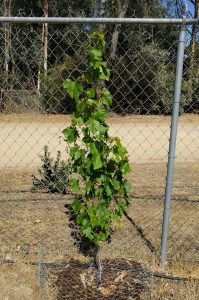 Also, as you tie the cane up, don’t tie the very end of the cane; put your last tie about a foot from the cane’s end. Sometimes tying down the end of the cane seems to stifle its continued growth. Finally, don’t wait too long to start tying the strong cane up or else it will get stiff and attach to the fence in an undesirable way and be more difficult to place vertically, as you want.

Or as I want, I should say. What if you just let a grapevine grow on a chain link fence without this tying, training, and later, pruning? It will grow, and it will give you grapes, but it will also take over your world. Grapes can be incredibly vigorous plants. Training and pruning them as I’m describing ensures that the vines stay within a certain size and produce the near-maximum in quantity and quality of fruit.

Back to training: Once the strong, vertically tied cane reaches the top of the fence, bend it to the right or left and begin tying it horizontally. Whichever way you direct it, another cane will grow near the bend that you can use to tie horizontally in the other direction. What we’re aiming for is a “T” shape. This might be as far as your vine gets in the first year. 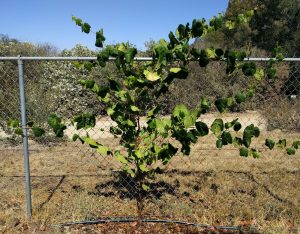 Sprouts will grow off the sides of your vertical trunk in the second spring if they hadn’t in the first spring, so if you want lower arms just choose two and tie them horizontally.

After you’ve got the two or four horizontal arms that you want, your training work is done. This is the scaffold that the vine will have for the rest of its life.

A note on nomenclature: I’m using the word “arm,” but grape people usually use the fancy word “cordon” for these permanent arms.

Each winter, you’ll have to cut off a lot of the past summer’s growth. Don’t be timid about this. Remember that grapes are incredibly vigorous plants. Also, don’t be haphazard. You need to prune in specific ways or you may not get any fruit the next year.

I cut my horizontal arms back to three feet in length, every winter. Then, on each arm, I cut off all but four canes, every winter. I choose four that are growing strongly and are spaced at least a fist’s distance apart. 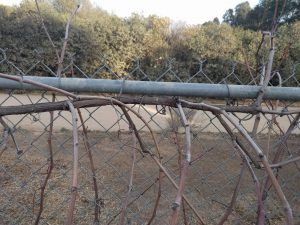 Horizontal arm of a grapevine with many canes. I’ll choose four and cut out the rest.

Then I cut each of the four canes on each horizontal arm back to two nodes (buds where a cane will grow), every winter. These stubs of two nodes are called “spurs,” and this method of pruning is called “spur pruning.” It works well on most grape varieties. 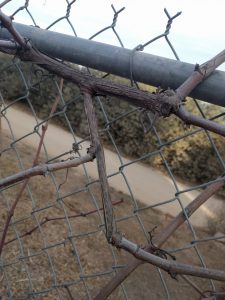 Grapevine spur that grew canes from its two nodes the previous summer. I’ll cut the canes back to two nodes again.

Here is what each of my vines looks like in January after pruning is finished. 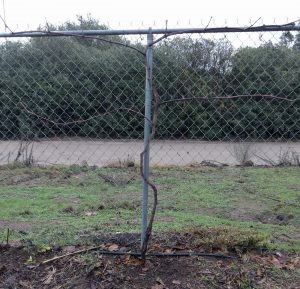 One vertical trunk, two sets of arms/cordons, and four spurs on each arm. Ready to rocket out new growth in spring!

Totalling things up, each grapevine will have about 16 spurs (four on each arm, and four arms). If you have a vine with only two arms, you’ll also want to prune down to a total of about 16 spurs, so maybe eight on each arm. Much more and the grapevine may not have the energy to make them all productive. Much fewer and you’ll get less fruit than is possible.

The following spring, all of the nodes on the spurs that were left will begin to grow and it is on them that clusters of grapes form in the summer.

Repeat the above pruning every winter, indefinitely.

Your grapevines will repeat their provision of wonderful clusters of grape berries for you every summer, indefinitely. 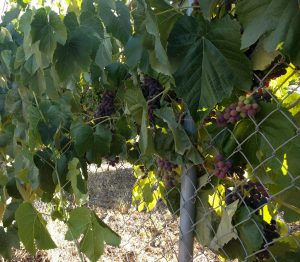 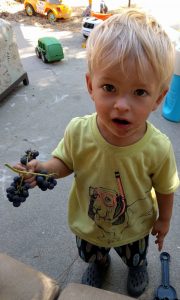 End note: A few grape varieties need to be “cane pruned.” This means that instead of cutting back the canes on each arm to two nodes, you leave them longer, about 15 nodes long. Be sure to look up how your specific variety needs to be pruned.

Grapevine on eave to shade house