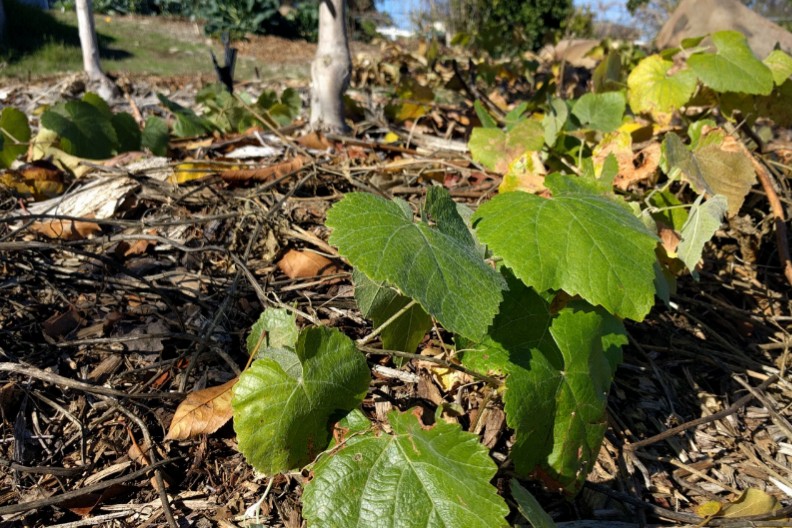 Last winter, my friend Frank cut some pieces off his grapevines and gave them to me. I stuck them in the ground and they grew into new grapevines. Could it be that easy? 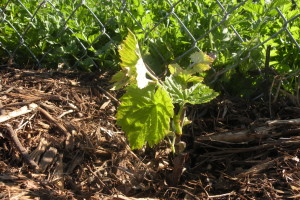 ‘Blueberry’ grape rooted last year, pruned back and flushing out again this year

This winter, I cut some pieces off those new grapevines and stuck them in the ground. They’re now pushing out small green leaves. It is that easy.

You read of people incorporating complex and expensive techniques and materials to propagate grapes, as well as other plants. They grow them in pots filled with certain percentages of perlite, they buy hormones that are said to induce rooting, etc. But I did little other than just stuck them in the dirt. And I had about 90% success.

The vines that Frank cut as well as the new vines that I just cut were bare and dormant. This was done in mid-January.

The cuttings were all 10-16 inches long, and each had a minimum of four buds. They were as thick as a pencil up to the thickness of a man’s thumb. Almost all of the cuttings I stuck in the ground last year rooted out, but the two that didn’t were only pencil thickness.

My process was to take a shovel and make a vertical slit in the dirt about eight inches deep and then stick the cutting, which just looks like a brown stick, into the slit. I sunk each one so that only two or three buds were above ground, and therefore at least two buds were below ground. (I transplanted last year’s cuttings at the same time I was sticking in this year’s cuttings, and I noticed that they had all rooted out precisely from the points where the buds were underground, most prolifically from the deepest bud.)

I poured some water into the slits and then pressed the soil closed around each stick. From that point on I aimed to keep the soil around the sticks moist, merely moist — not dry and not soggy. I poked around every week or so and added water if necessary. Last year’s cuttings were surrounded by tomato plants by the spring, so I just let them be watered on the same soaker hose with the same schedule that watered the tomatoes.

The ground where I put the cuttings last year was in full sun and this year I put some in partial shade. It hasn’t seemed to make a difference.

Incidentally, Frank gave me some cuttings off branches of a couple of his pomegranate and fig trees last year too, and I stuck them in the ground right beside the grape cuttings and they all rooted out just the same. Thanks, Frank.