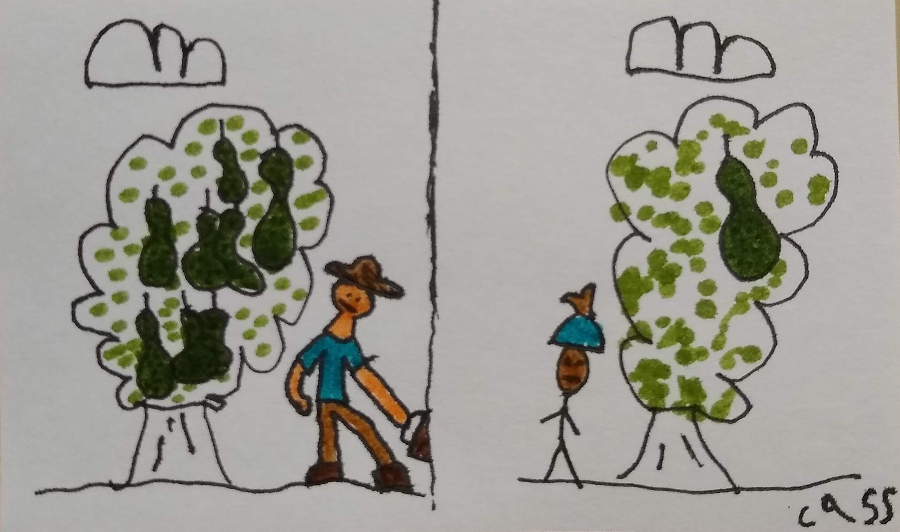 Would you rather have 50 avocados from a tree every year or 100 avocados every other year? By nature, individual avocado trees do not bear the same amount of fruit every year, year after year. Their crop load fluctuates, and it fluctuates for many reasons.

I know of three proven ways to reduce that fluctuation, which is called alternate bearing, especially when it is extreme. You can thin the crop when it’s heavy, girdle a major limb or two, and choose avocado varieties that produce more consistently.

Thin crop in “on” years

When an avocado tree is carrying a lot of fruit, people say it’s having an “on” year. When a tree has little to no fruit, people say it’s having an “off” year. If you remove a good portion of the fruit in an on year, the tree will come back with a good bloom and fruitset the following spring, provided no other problems are encountered (such as bad weather). In this way, you can even out the tree’s fruit production.

This is not just botanical theory. Carol Lovatt of the University of California, Riverside put this idea to the test on Hass trees in Irvine. She found that when trees having an on year had their new fruit removed while still small (by August at the latest), they had a higher amount of bloom the following spring compared to other “on” trees whose fruit was not removed.

Why does this work? If an avocado tree is carrying a fruit on a shoot, that shoot will not grow much and will not make flowers the next spring. Go look at your trees to prove to yourself this is true.

Avocado trees only make flowers on shoots that are not carrying fruit. When you remove fruit, you make available more shoots that can flower the next spring.

A practice with a similar effect is pruning a tree when it’s about to have an on year’s bloom. In other words, if the tree has a low crop and is expected to have heavy flowering in spring, then you can prune it just before or during that bloom (pruning in February or March is usually best), thereby reducing the amount of flowers it will produce (because you’ve cut off many of its flower buds).

A second method of managing alternate bearing in avocado trees comes through harnessing their tendency to do so rather than fighting it. This is done by encouraging one half of an individual tree to have an on year while the other half has an off year. You combine the on and off years within a single tree each year. And this is done through a technique called girdling.

Girdling is cutting into a branch in order to interrupt its sap flow. If done right, this girdling causes the branch to make lots of flowers and set lots of fruit.

If you girdle one or two major limbs on a tree, then what happens is you get lots of flowers and fruitset on those limbs while the rest of the tree flowers little or not at all, thereby having an off year.

Then you can girdle the non-girdled branches the next year to ensure that they have an on year while the branches you girdled first have an off year, a year of recovery. So in effect you’ve created alternating production within the same tree, but consistent, moderate production overall from that one tree.

I’ve girdled some of my trees in years past, but I’m not expert on the technique. The technique is in no way experimental for others though. It has been used in avocados in California for over a century. (See “The Effect of Girdling the Avocado” by J. Eliot Coit written in 1921.)

I visited one grove in Ventura County whose Hass trees are all girdled every single year (as long as they’re sufficiently healthy and vigorous). They don’t girdle their other varieties, such as Lamb, GEM, and Gwen, by the way, as those varieties are not as vigorous as Hass.

Here are some presentations with details on girdling avocados, if you’re interested in trying it:

See the section called “Develop a two-leader tree” on page 16 in this paper by R. Hofshi, M. Tapia, and M.L. Arpaia

The third main way to get more consistent fruiting from an avocado tree is to plant a variety that naturally alternates less. Fuerte was famous for having big swings in production, and then Hass was found to be less alternating, but today there are varieties that alternate less than Hass.

Don’t be misled into thinking that there is an avocado variety whose fruit production doesn’t ebb and flow at all – if you know of one, share this news with me – but some which alternate less than Hass and Fuerte include GEM and Reed.

I say this based on firsthand observations, but it is affirmed by the experience of many others and some well-designed trials. See one report on a trial in Irvine by Mary Lu Arpaia comparing GEM, Hass, and Lamb in terms of alternate bearing in this video of a presentation for a California Avocado Society at 1:28:30.

On the other hand, some varieties that I’ve seen alternate as much or more than Hass, in addition to Fuerte, include Nabal, Lamb, Bacon, and Sir-Prize. These would be varieties to avoid if you are particularly interested in consistent production.

Here it’s important to note when alternate bearing starts in a tree. It usually does not start in the tree’s first few years in the ground. Young trees often have successive, moderate crops. But at some point the conditions will be right for a heavy crop, and it is then that a light crop follows and the alternation has begun. Otherwise, it can start after a bad weather event such as a freeze.

In my observations, the older a tree gets, the more its production alternates, if it has that tendency.

Here I run through my yard showing examples of these three methods of managing alternate bearing:

Are there other ways to manage alternate bearing?

Some say that timing of harvest influences alternate bearing. For example, an avocado researcher in Australia, Tony Whiley, says harvesting a tree’s crop as soon as it is mature (early harvesting) leads to more fruit the following year compared to leaving a tree’s crop on the tree until late in its harvest season. In other words, “On-tree fruit storage is detrimental and contributes to alternate cropping.”

(See “A Conversation with Tony Whiley” by Reuben Hofshi in the 1995 California Avocado Society Yearbook.)

However, while harvest time might be consequential for farmers, who often pick every avocado on an entire tree at one time (strip picking, in the jargon), it seems far less consequential for home growers. Home growers don’t harvest their avocados at one time, early or late. Home growers usually pick a handful or a dozen avocados each week from a particular tree starting at the beginning of its harvest season and continuing until the tree has no more fruit. So, for example, from the moment your Reed avocados start tasting good to you – maybe starting in July – you incrementally reduce its crop load all the way until it’s gone. Timing of harvest seems irrelevant as a method to manage alternate bearing for home growers, it seems to me.

A final idea is to plant a second tree of the same variety so that when one tree is having an on year the other can be having an off year, and vice versa. This way you can have avocados of that variety every year.

It’s a good idea, and I’ve seen it work. One of my friends has a handful of Hass trees and in any given year a few of them are loaded with fruit while a few others have almost none. If you have the space in your yard for this kind of thing, go for it.

But be aware that you may have to initiate the alternation by thinning or entirely removing the crop on one of the trees in order to force it into an off year while the other is having an on year.

Also, there may come a time when the weather conspires to wipe out the crops on both trees. It could be extreme heat or a freeze. Then the trees will both want to come back with a heavy crop as soon as they’ve recovered, and you will have to remove the fruit from one in order to force alternation again.

In conclusion, if it’s important to you to have a single avocado tree that fruits as consistently as possible, then I would recommend doing two simple things. Choose a variety that is known not to alternate bear badly – say, Reed, GEM, or even Hass. And then secondly, never allow it to hold a very heavy crop. That is, if it ever sets a heavy crop, thin a portion of it around June or early July so that the tree grows plenty of new shoots that can flower the following year.

Thank you for your financial support that allows me to write posts like this one. If you’d like to show support for my work at The Yard Posts, click HERE