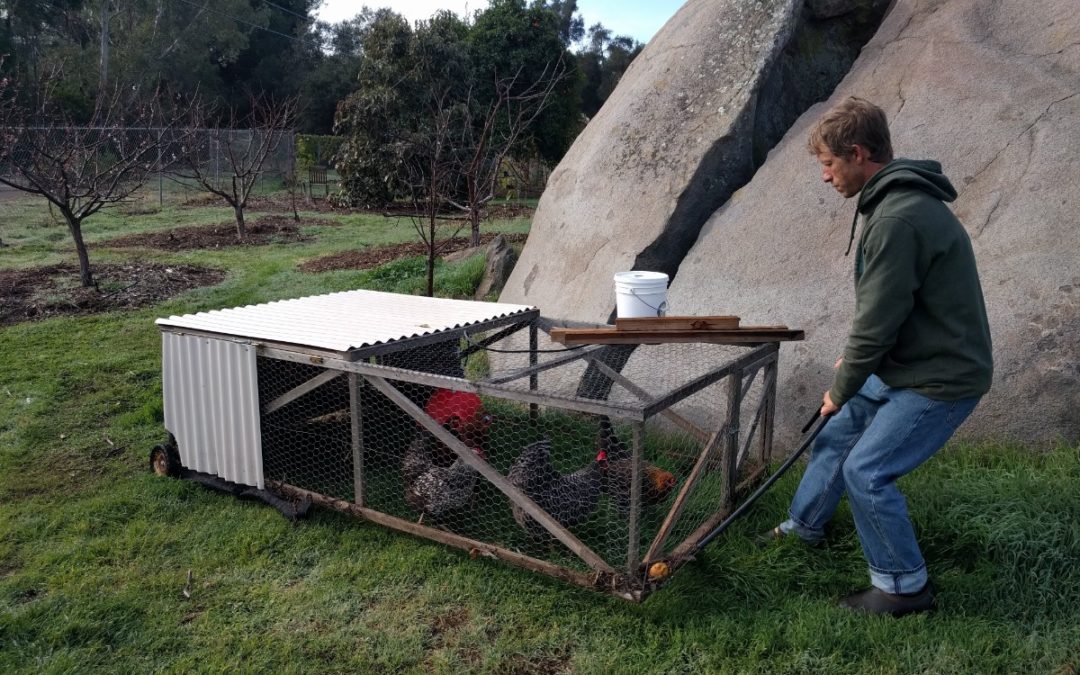 My goal is to keep happy and healthy chickens that do work for me. Building a small, mobile pen for them was my way to accomplish this.

For four years we kept four birds full-time in a modest four foot by eight foot pen. I moved the pen and chickens around our yard so the chickens could spread their manure near fruit trees (see photo above, taken a few winters ago).

I also put the pen under fruit trees or over vegetable beds so they could eat bugs:

Or I kept the pen in one place for a while so the chickens could make compost for us:

The pen and my routine with the chickens wasn’t perfect, but it worked — for all of us, I believe.

Maybe you’d like to try something similar in your yard. Here are some details about — and reasons for — the design of my mobile pen.

The pen is four feet wide by eight feet long, and it is two feet high. My inspiration was to build a pen that was a slightly modified, miniature version of the pens that Joel Salatin builds for his pastured broilers. Salatin’s book Pastured Poultry Profits is a resource that you ought to own if you want to raise chickens on the move, so to speak.

As with Salatin’s pens, I used mostly 1-inch by 2-inch wood for the frame except for a couple of 2 by 2 pieces (center crossbeam, and bottom supports in front and back). Using wood any thicker only adds unnecessary weight.

I fastened all of the wood together with screws rather than nails, as Salatin wisely recommends, because that way the pen can flex as it moves. The nails would work their way loose.

I wrapped most of the pen with 1-inch mesh poultry wire. Smaller mesh, like half-inch hardware cloth is more expensive and unnecessary for predator protection or keeping the chickens inside. Such tight mesh also prevents some bigger bugs such as grasshoppers from hopping into the pen and becoming a chicken snack (I’ve watched this happen).

In our Southern California climate, the chickens don’t need any specific cold protection. They just need to be able to stay dry and out of the wind during winter storms. You must balance this need for winter shelter with the need for ventilation during summer heat.

To accomplish all of this, I put a roof over only half of the pen’s top and I put walls around one end (back end) and only one third of each side, such that there is something like a small cave with an overhang at one end (the back end) of the pen. The waterproof material that I used for this roof and walls is Tuftex vinyl corrugated panels that I bought at Lowe’s. It is lightweight, tough, and flexible.

My pen has kept our chickens warm enough during temperatures slightly below freezing and it has kept them cool enough in temperatures as high as 118 degrees during that July 2018 heat wave.

In order to collect eggs, clean the water, add food and so on, you need access to the inside of the pen. For access I made the roofed half of the top of the pen an unattached panel that can be lifted. At first, I put a hinge on one side but later I removed it because I wanted to be able to lift the panel from all sides. This roof panel is heavy enough that it stays in place except during high winds. If there are high winds, I just place the bucket of water on the roof to hold it down.

I also added a hinged door on the front of the pen, which is useful for letting the birds out in the evening to run around and for accessing that front part of the pen. Sometimes I want to put food scraps in that part of the pen, and sometimes the crazy birds decide to lay eggs there.

The bucket of water on the roof is connected to a hanging waterer made by Plasson that is attached to the middle crossbeam. I also use a hanging feeder attached to the diagonal support under the roof in the back (so dew or rain doesn’t spoil the feed). Having water and food off the ground makes it very easy to move the pen. There is nothing to pick up or detach; you just start pulling.

On the front end of the pen I attached a wire to eye hooks. I wrapped the wire in a poly tube so that it was comfortable in my hands, and I could use it to pull the pen from place to place.

Initially, I mounted old lawnmower wheels onto the back of the pen (see the photo at the top of this post), but I have since removed the wheels.

The problem with the wheels is that they raise the pen’s frame and create a gap. Chickens can sometimes squeeze out of that gap, and more importantly, predators can squeeze in. I did put some fencing there to cover the gap but it wasn’t entirely effective. I lost one chicken to a possum that squeezed into the pen by digging under the fencing by the wheels.

Since the pen is so light, I found that it slides easily without the wheels, as long as the pasture is not too tall or there are no big obstacles in the way such as large pieces of fallen fruit or wood.

Also at first, I put a nest box in the pen. It was a milkcrate that I attached to one wall, but the chickens continued to lay their eggs elsewhere in the pen too. The nestbox added weight and didn’t earn its keep so I removed the nest box. The hens proceeded to just lay eggs right on the ground usually somewhere under the covered back end of the pen.

Finally, I installed a roost bar across one corner of the back of the pen. It’s technically unnecessary. Without it the birds would just sleep on the ground. But chickens like to sleep up off the ground, and they poop continuously throughout the night so I figure it’s more hygenic to have them not sleeping on their poop.

In total, the pen cost me about $130 for construction materials and the feeder and waterer. It is simple and light, and yet it is durable. After four years of constant movement, nothing has broken or needed repair except for a bit of poultry wire that came loose on one corner because I hadn’t stapled it well enough in the first place.

Why have I been speaking in the past tense? Since 2016 our family has grown, and we need more eggs so we’ve decided to keep a bigger flock. Today we have nine chickens. I’m experimenting with having them sleep in the small mobile pen but allowing them to roam inside a movable fence (from Premier 1) during most days. We’ll see how it goes. I’m still figuring out how to work this larger flock, which includes a rooster.

“Chickens eat bugs in the garden”

“Should you get chickens”