Santa Ana winds and your garden 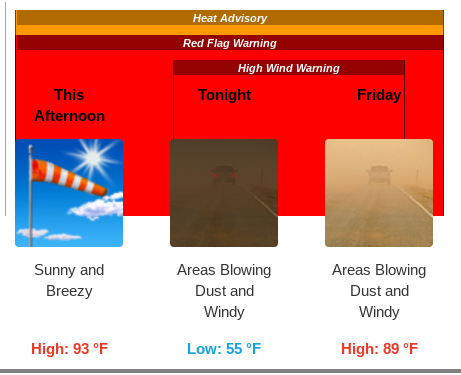 Santa Anas cause many things. They mess up your hair, they put dust into your eyes, they make your lips crack and your throat feel dry, they make the power company shut off your electricity, and of course, they make fires run wild.

Santa Anas also make for good surfing conditions. So yesterday I met my friend Erik at his house in San Diego to go for a surf. Before we left, I snapped this photo of the happy plants in his vegetable garden boxes.

By the time we got back, his happy plants had turned wilty and uncomfortable in the conditions.

How are vegetables and fruit trees affected by Santa Anas, and how can we help them cope?

What are Santa Anas, exactly?

But first things first. What are Santa Anas, exactly? They are more than just winds, and it is every part of Santa Ana conditions that contributes to effects on your garden. If there is an official definition for Santa Anas, it might come from the National Oceanic and Atmospheric Administration, which says, “In southern California, a weather condition in which strong, hot, dust-bearing winds descend to the Pacific Coast around Los Angeles from inland desert regions.”

During Santa Anas all is opposite. They are east winds, coming from the desert, so they are dry and warm.

Moreover, they are stronger than normal ocean breezes. Santa Anas hit the mountains that cradle the Southern California Bight, and they push over the mountains and through the passes with increased fury.

Often the winds lose velocity when they get close to the beach. This is especially true down south in San Diego County. (Where Erik and I surfed there was no wind, yet at my house twenty miles inland the wind was gusting around 30 miles per hour.)

Yet, even when the wind doesn’t make it to the beach, the warmth usually does. Santa Ana days near the beach can be dead calm and surprisingly warm, sometimes just as warm as the desert.

Desert to ocean, almost the same temperatures. That’s not normal.

Water use of plants rises

For example, yesterday, October 24, the evapotranspiration rate measured at the CIMIS station in Escondido was 0.21 inches, which is about equal to the average for a summer day.

(What is the evapotranspiration rate?)

Watering during Santa Anas is often necessary, but watering just before the Santa Anas arrive is sometimes vital. Just as with a summer heat wave, you want your plants to enter stressful weather conditions fully hydrated. This allows them to cope with the wind, heat, and low humidity better; there’s no recovery necessary, just coping.

Also, these days the power utilities are more inclined to shut off electricity during Santa Anas, and your ability to irrigate might be dependent on that. If you’re on a well, then what can your generator and pump handle?

I’m not on a well, but my electricity was shut off during this Santa Ana event and that made one of my irrigation timers not work because the back-up battery had died without my knowledge. My fault. Glad I was around to turn on the valves by hand, but I’d watered things before the shutoff so they weren’t desperately thirsty anyway.

Young trees with weak trunks must be staked well or they are vulnerable to being blown over, or even snapping in half, during Santa Anas. The same risk is there for trees that have imbalanced canopies.

During one Santa Ana event, I had a Fuerte avocado tree blow over because the canopy was too heavy on one side.

Yesterday, I almost lost a branch that was carrying a heavy load of fruit on my Reed avocado tree. I had propped it up for support, but the winds still knocked over my support, again and again.

What to do? I sacrificed avocados and pruned back the limb. Rather that than lose the entire limb.

For young or imbalanced trees, prune and/or stake as necessary before the winds hit.

Fruit is knocked off

Since Santa Anas occur in the fall and winter, there are certain fruit trees that are vulnerable to having their fruit knocked off in the strong gusts. Avocados are definitely at risk, as are pomegranates and apples. My passion fruit vine has also dropped some fruit.

Unfortunately, there’s nothing much you can do to prevent this. You might harvest some of the apples that are on the exterior branches before the strong winds hit. Just pick the pomegranates up off the ground as they’re unlikely to be very damaged, unless critters get to them before you do.

As for avocados, if you live in a place that gets strong Santa Anas often, then you might consider growing certain varieties instead of others. Hass tends to drop fruit easily in Santa Ana winds. In contrast, Pinkerton and Lamb are two varieties that I’ve noticed hold onto their fruit more strongly.

This morning was windy and I was thinking about writing this post. Are my broccoli seedlings thirsty? Do any trees need staking assistance? Then smoke appeared over the hill to our east.

The Santa Anas were going to blow that fire straight into us. I started packing the car. Who cares about broccoli plants and avocado trees?

Gratefully, firefighters contained the burning hillside. And I could return to less serious garden thoughts.

What to do in a Southern California garden in October

What to do in a Southern California garden in November