Which is the heirloom tomato? 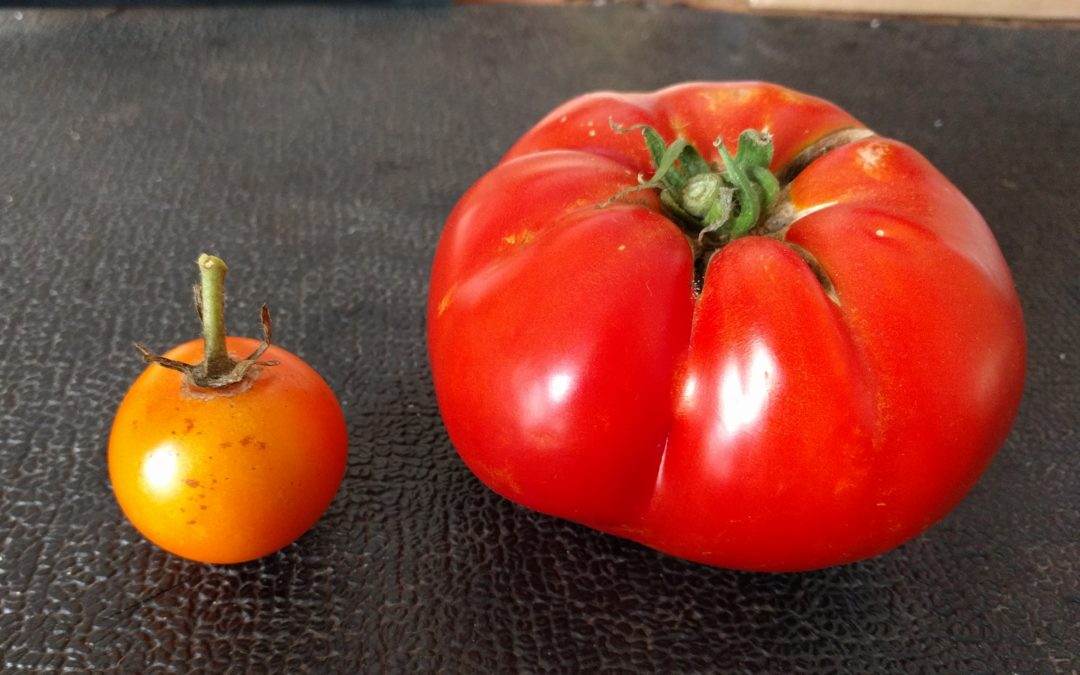 Are heirloom tomatoes big or small? Are they red or orange or yellow? Are they wrinkly? Are they meaty? What do they taste like?

What the heck does heirloom mean?

Of course, heirloom has nothing to do with size or color or rugosity or taste. It has most to do with age. The most common definition of an heirloom variety of any crop is one that is old — usually people say at least fifty years old, old enough to have been passed down for a couple of generations, like a piece of heirloom furniture.

Then another key part of the common definition is that the crop is open-pollinated. This means that if you grew the seed from it you would get a plant that produced the same fruit. So, if I had an heirloom tomato that looked striped and was huge, and I sowed seeds from it, the plants that grew would give me fruit that were similarly striped and huge.

That doesn’t happen with hybrids. Sow a seed from a hybrid tomato and you get a plant that makes fruit that are at least a little different from the original hybrid tomato. (In fact, I did this with the Champion hybrid tomato cultivar this summer, and the fruit from that plant is acceptable, but different from its parent.)

An heirloom tomato, then: at least fifty years old, and open-pollinated.

Which of the tomatoes pictured above is an heirloom? There’s no way you could know unless I told you. How could you know how old the variety is? How could you know whether it came from an open-pollinated or hybrid seed? You never could, so I’ll tell you.

It’s not the one on the right, the red one. That is a variety called San Diego, also known as San Diego Hybrid, originally known as 7718. Normally, this variety is not quite so big nor as corrugated. This specimen is unusual. I like this variety’s meaty insides and high yields. I grow it every year. But it’s a hybrid, so I don’t save any seed. I grow it from seedlings I buy at the nursery.

The heirloom tomato is the one on the left, the small orange one. Called Jaune Flamme, it came to our country from France. It may not look like much, but the fruits are so juicy and sweet, and I love their vibrant persimmon color, which I add to salsas for effect. If you know the hybrid cherry tomato called Sungold, then you can think of Jaune Flamme as big Sungolds.

I will save the seed of some Flamme and grow them again next year. As an heirloom, it’s open-pollinated, so I can do that. It should grow “true”, as they say.