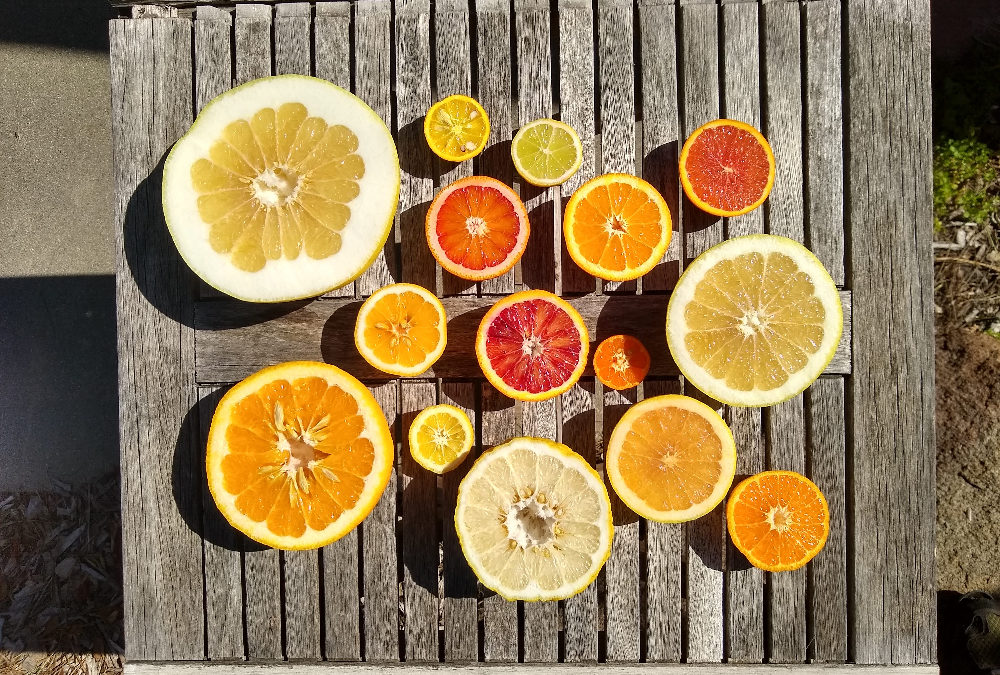 April is a great time of year to plant a new citrus tree, but which kind to plant? Take a cue from these Yard Posts readers who share their favorite varieties from their Southern California yards.

To further complicate the Lavender Gem variety, it also goes by the name Wekiwa.

More than that, cut open you discover a stunning coloring to its flesh, sometimes amber, sometimes tie-dye.

The taste is slightly sweeter than a typical grapefruit but still contains a background of grapefruit flavor. It’s a seedy fruit. Bob uses only one word to describe it though: “Exquisite!”

Rick has grown many of his citrus trees from seeds that he sowed and then grafted. He has countless varieties on his hillside property overlooking Mission Valley in San Diego.

Rick especially has a diversity of mandarins, but there’s something about Tahoe Gold that is over the top for him.

Tahoe Gold is one of three mandarins that was bred at the University of California, Riverside by hybridizing Temple tangor (a tangerine crossed with orange), Dancy and Encore mandarins. Rick grows all three – the other two being called Shasta Gold and Yosemite Gold.

In March, I ate a few Tahoe Golds with Rick at his house. He had picked some and placed them in the refrigerator before I arrived. It was a warm day and this made them taste even more refreshing.

The fruit has one of the deepest orange rinds I’ve seen of any citrus. Unfortunately, the rind does not peel easily. That’s the only downside of Tahoe Gold I could detect though.

The fruit inside is wonderful, with segments that have very thin, delicate membranes that can barely contain the bursting amount of juice within. I was not able to eat a Tahoe Gold without getting juice all over. The juice has far more tangerine than orange flavor, and the juice’s rich flavor is what Rick likes most.

My neighbor Lori has a dozen or so citrus trees, but she’s most enthusiastic about the Cocktail. Like so many modern-day citrus varieties, Cocktail is a hybrid.

Here’s what the researchers at U.C. Riverside say about it: “Cocktail is actually a hybrid of Siamese Sweet pummelo and Frua mandarin. The cross was made at Riverside, possibly in the 1950s.”

Apparently, since Cocktail is not quite as big as a pummelo, it is sometimes called a grapefruit.

Call it whatever you want, it tastes like no other citrus I’ve ever experienced. It’s very seedy so it’s best used for juice.

And the juice is so thick and orange and sweet that it tastes artificial. The first time I tasted it, I thought of Kool-Aid. Sometimes my family uses it straight to make popsicles.

You have likely already read that I’m a fan of Kishu mandarins, and my children are even bigger fans. But we are not alone. Two Yard Posts readers wrote in to give two thumbs up for the Kishu trees in their yards.

Doug says, “I have to vote for the Kishu Mini. It’s not that it’s your kids’ favorite, though they’re right, it’s the flavor. A friend I went to high school with is a second generation nurseryman whose local nursery (West Valley Nursery) has been in business about 70 years, and he says Kishu is his favorite too. . . Here’s a picture of mine, planted about 10 years ago.”

And Lorie says, “I remember walking into Armstrongs nursery nearly 15 years ago just to look around. When examining the citrus selection, a polite salesman chatted me up and said, ‘Have you ever tasted a Kishu mandarin? It will be your favorite, without a doubt.’ He was so convincing, I walked out with a 5 gallon Kishu and am happy to report, he is 100% right. Here is our loaded tree in early 2022, ready to harvest.”

Thank you, Doug and Lorie. It feels good to know we’re not alone.

Where to buy these trees

If you’re interested in planting any of these varieties in your yard, a good nursery nearby should be able to special order any one of them if they’re not currently in stock. These are not extremely rare varieties.

Alternatively, check out Four Winds Growers. They’re located in Northern California and ship all over California, and some other U.S. states as well. They grow all of the above varieties.

Finally, if you’re the grafting type, head over to the Citrus Clonal Protection Program, as they offer budwood of all of these varieties except for the Tahoe Gold mandarin.