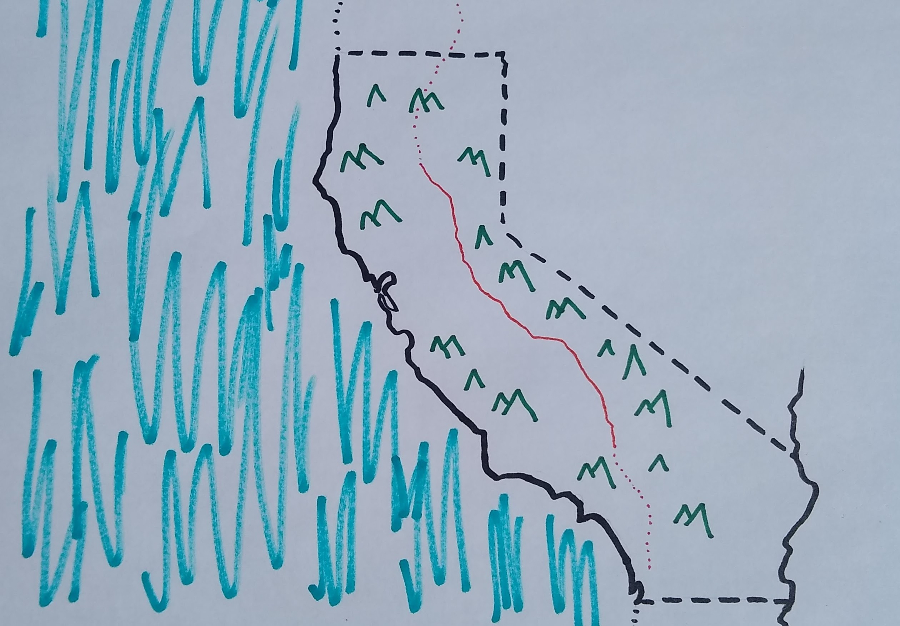 A few weeks ago, on our way back down from a friend’s wedding in Oregon, we decided to take our rented RV on Highway 99 rather than the faster Interstate 5. I should say that I decided to take Highway 99. From Red Bluff in the north to Bakersfield in the south, the 99 cuts through 400 miles of agriculture, and I’m interested in agriculture.

You know that, topographically speaking, California has a humungous swale carved out of its middle: the great Central Valley. Highway 99 is the original route up and down that Central Valley.

It had been many years since I’d travelled on some sections of the 99, and I can’t even remember the last time I drove on the part above Chico. This time I would drive the whole 99 continuously, from top to bottom. How would the crops change from the top end to the bottom end?

Up above Chico it was all olive trees, almonds, and walnuts. Olives and nuts. There was no fruit; there were no vegetables. Only near Chico did the first fruit tree orchard appear, one of plums or pluots. I wonder why they don’t grow fruits or vegetables, or much anyway, up near Red Bluff.

Citrus first appeared near Gridley, well below Chico. And then surrounding Gridley I saw orchards of persimmons and peaches or nectarines also.

Nearer to Sacramento, rice fields were aplenty with their telltale attributes of being perfectly flat, bounded by earthen berms, and flooded with water.

Many vineyards started at Lodi, some grapevines being head-trained, some on trellises, some very old with thick trunks, some thin and newly planted.

More citrus took up land as we got below Fresno and approached Bakersfield. We passed a giant building complex with an even bigger freestanding wall advertising Halos brand mandarins. Once home I looked into that Halos building. Halos is owned by The Wonderful Company, and that building is claimed to be the world’s largest citrus packing facility. Wonderful claims to be America’s largest citrus grower.

Also becoming more common in the south were feedlots of cattle. Innumerable black and white cows were mostly huddled near shade structures and feed troughs, surrounded by acres of baking bare land — except for their excrement — and manure lagoons. It smelled to high heaven. This is the dairy industry, but it didn’t smell like milk.

I was reminded of a passage from Joel Salatin: “Any food production system that stinks up the neighborhood — regardless of how rural — is unacceptable . . . If you ever smell manure, you’re smelling mismanagement.” (Page 27, You Can Farm.)

I’ve always kept this passage in mind with my tiny chicken flock. But having a nose that doesn’t work well, I have to be extra attentive because once I can smell unpleasantness in my chicken pen it’s surely long overdue for an addition of wood chips to cover and compost the manure.

Close to Bakersfield, the south end of Highway 99, there were still almonds. Almonds were the common thread, being grown from the top of the 99 to the bottom. Someone in every county was growing almonds, from Tehama to Kern.

I imagined what it would be like if I were a bug that fed on garlic. I would be in heaven here if I found the garlic field. I could eat all I wanted for acres and acres, not being without garlic to eat for more than a few inches between rows as I meandered and masticated and proliferated.

I also imagined what it would be like if I were a bee in one of these grand monocultures of hundreds of acres of almonds. I wouldn’t be. Even though there would be tasty flowers to feed on for a few weeks each winter, there was nothing here in early June, nor was there anything to eat for the other 50 weeks of every year. That’s why bees don’t live in California’s almond orchards, and that’s why honey bees are trucked in by the billions in order to pollinate the almond trees each February and March.

But those bees best not fly over to the wrong grove of mandarins and sip the nectar of their beloved citrus flowers. You know how those mandarins that you buy in stores — such as those sold under the brand Halos — never have a seed inside? Sometimes that’s because the mandarin variety is naturally seedless while other times it’s because bees have been forbidden from visiting the mandarin trees.

(The mandarin farmers and the bee keepers of the Central Valley have had a challenging relationship because the bees can make some mandarins have seeds. See here and here.)

On one hand, I looked over these green monocultures as I drove down Highway 99 and thought they looked verdant. They looked productive. There was beauty.

On the other hand, I kept recognizing how unnatural and imbalanced and vulnerable were such vast patches of a single plant.

This made sense of the billboards. Along the entire stretch of 99 were billboards advertising “protection” for rice or grapes or some other crop. Here’s one:

“Stop damage before it breeds . . . Target pests with Suterra CheckMate.”

Once I got home I looked up Suterra CheckMate. It’s a product used on insects in fields of citrus, grapes, cabbage, apples, peaches, tomatoes and more. And Suterra the company? It’s also owned by Wonderful.

(The Wonderful Company is owned by a husband and wife who live in Beverly Hills. They own a lot more than Halos and Suterra. For example, they also claim to be “the world’s largest grower and processor of almonds and pistachios.” You can dive into a deep hole reading about them. If you care to start: here’s one article and here’s another.)

I looked up one more company advertising pesticides on the billboards of Highway 99, this one called Nichino America. ​It is owned by Nihon Nohyaku, an old company from Japan that started making agricultural chemicals there in the 1920s and has now expanded into pharmaceuticals, according to its website.

How much of these concoctions made by Suterra and Nichino America and the others were being used in the fields of the food plants along the 99?

Whenever I drive by a farm I pay special attention to their form of irrigation. I was made especially attentive after seeing the electronic message boards along Interstate 5 starting right below the Oregon border glowing, “SEVERE DROUGHT, SAVE WATER, SAVE CALIFORNIA.”

As you drive south, the dirt fades to the color of sand. The native trees disappear. Well before Bakersfield it is clear that you are in a desert.

The first orchard on drip irrigation that I saw was near Madera, south of Sacramento, south of Stockton. At that point, drip became more and more common as we approached Bakersfield.

It had never occurred to me how low in elevation the Central Valley is until we entered Yuba City, which is about halfway between Chico and Sacramento. Upon entering, the sign said that the elevation was 60 feet. I thought: Only 60 feet in elevation? But we’re so far inland.

After Yuba City at 60 feet, I found that Sacramento was signed at even less, 30 feet in elevation. Below that, Stockton was only 13 feet.

I tried to make sense of this. As I described the Central Valley earlier, it’s a swale carved out of California’s middle. It’s bounded by coastal mountain ranges to the west and the high Sierra Nevada mountains to the east, in addition to mountains capping the north and south.

Draining these mountains are two main rivers: the Sacramento in the north and the San Joaquin in the south. The rivers run toward each other to meet near Stockton . . . so of course Stockton must be relatively low in elevation. Still, at only 13 feet it couldn’t be much lower or a lake would form and the water would never make it west to the ocean in San Francisco Bay.

Predictably, as we drove south of Stockton I watched our elevation climb. We were travelling upstream near the San Joaquin River and eventually near the Kern River toward Bakersfield whose elevation is 404 feet.

Immediately upon arriving at our home near San Diego, our three kids jumped out of the RV and attacked the blueberry bushes. The blueberries hadn’t been picked for ten days while we’d been on the road so there were lots to eat. Our kids hadn’t eaten food right off of a plant for ten days either so they were eager to get some fresh stuff.

They migrated over to the apricot tree, then the cherry trees, then to the tomatoes and cucumbers.

In some fashion, our little yard with just a few plants of many different types seemed richer than those fields along the 99. Those fields were big, but they weren’t as impressive as they used to be. In fact, they seemed sterile and brittle.

My little garden looked tougher and more alive. I had arrived home more eager to feed my children from it, to grow more of my own.

I’m able to write because of reader contributions. Thank you, Supporters.