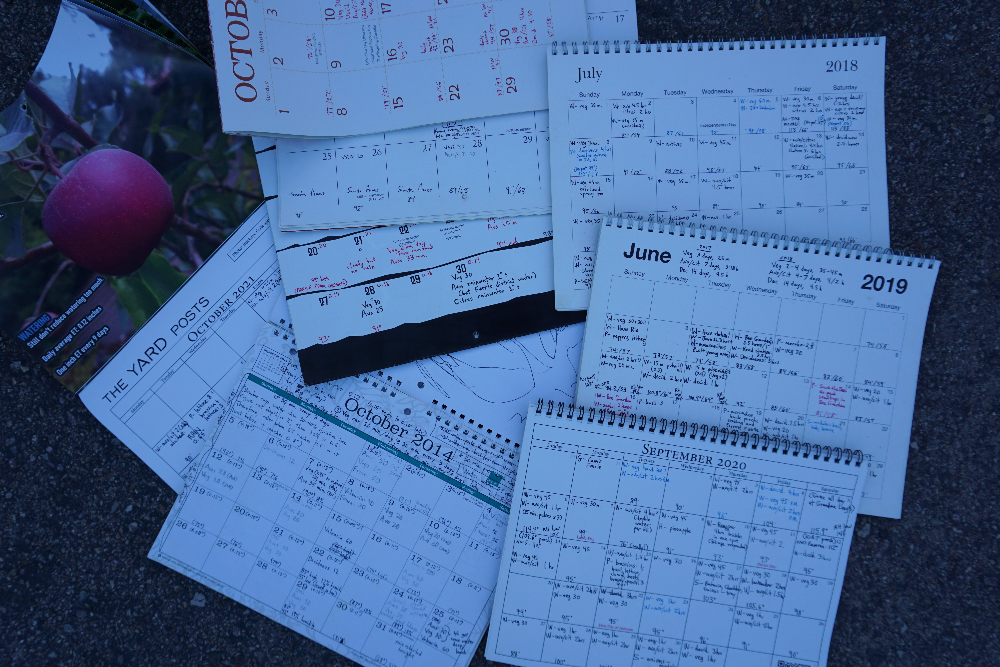 “It’s been so hot this summer,” said a friend a few weeks ago, at the end of summer.

Occasionally I miss a day, but I really do record the high and low temperatures from my yard’s weather station almost every evening before going to bed. It’s part of my routine, along with reading the weather forecast.

Because of my recording habit, I end up with a fairly complete and handy past-weather reference. And since I’ve been doing this consistently since 2015 I can compare summers.

Normally, we use our air conditioning for a total of one to two weeks each summer, during extended hot spells. This summer we didn’t turn on our AC once.

Usually, the fruit of certain trees in our yard gets sunburned, especially apricots and Pink Lady apples. None this year.

A few tomatoes and peppers still got burned, but they scald at lower thresholds. It doesn’t need to be much over 90 for large peppers that don’t have leaf coverage to develop sun scald spots.

The avocados came through this summer happily. There was no sun or heat damage to even the smallest of my trees except one that is planted next to a large, light-colored boulder, which seems to intensify the sun and heat.

I’m grateful for the mild weather of the summer of 2021, overall. There were a couple thunderstorms in Southern California in the late summer though, as you know. One stomped through my neighborhood on August 29 and dropped hail and blew angry winds.

Among the damage in my yard was a 30-foot tall Chinaberry tree torn into pieces:

At least we got a lot of wood chips from the removal of that tree.

Do you recall the whipping of heat that finished the summer last year? If you live inland you probably got some damage on some plants. At my place, there were eight consecutive days of 100 or higher from September 28 through October 5. Good riddance to that summer.

The end of this summer? Didn’t even notice it. Not only were there no 100-degree days, a significant rain arrived on the night of October 4. I recorded 0.65 inches of precipitation in my yard.

I lived in a rural part of Africa for a few years, and I remember farmers always saying in conversation, “It hasn’t rained in months!” or “This was the driest year ever!” But I paid attention to the weather too, as I was growing my food just like them. I needed to hand water whenever the rainfall was insufficient. I also pulled my drinking water from a tank that collected rain from the roof so I knew when it rained and when it hadn’t, and I knew approximately how much had fallen. Over time I concluded that these farmers weren’t trying to accurately describe the weather so much as being dramatic for the sake of fun conversation.

It occurred to me that maybe my friend had been doing the same thing by saying this last summer had been so hot. She had no idea that I would get all serious and factual on her!