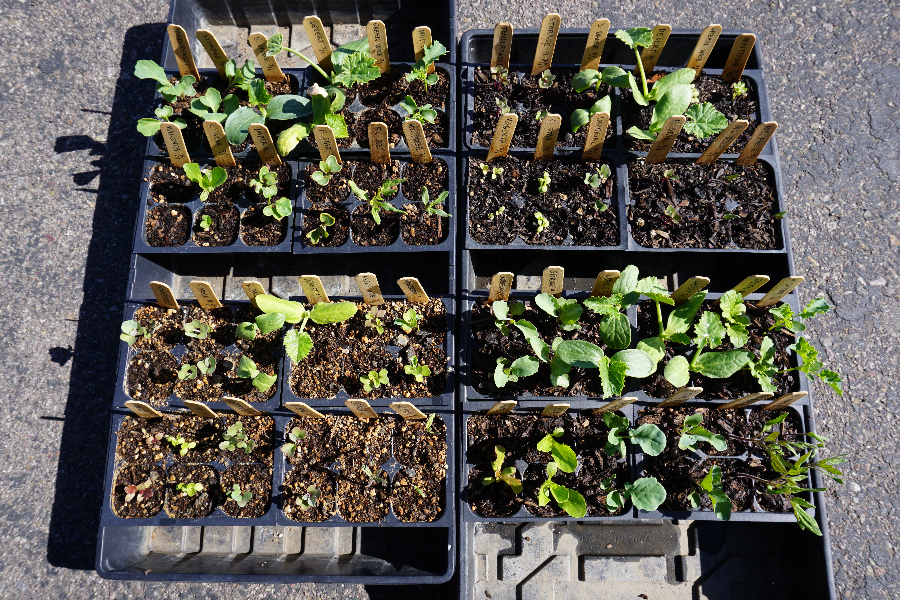 Before doing this experiment, if you had asked me which mix to buy for starting vegetable seeds I would have recommended the most expensive you could find. You generally get what you pay for with potting and seed-starting mixes, was my view.

My view has changed.

The design of the experiment

The aim of the experiment

The overarching question that I hoped the experiment would answer was whether more expensive mixes grew better seedlings. In other words, were they worth the extra money?

Here is how the seedlings germinated and grew. In each photo, the location of the mixes is the same.

After taking this photo on March 14 I thinned seedlings in the lower right mix because they were large and crowded.

On March 21 I declared the experiment over since some of the plants in some of the mixes were big enough to need transplanting. The results were also clear to me at this point.

Before I tell you which mix is which, would you like to guess?

How would you rank their performances based on the photos?

Why? It would be helpful to suss out why the mixes performed the way they did. Let’s look at ingredients first.

I see only slight differences in the listed ingredients, but the actual products don’t look as similar.

Edna’s Best reminds me a bit of a municipal greenwaste compost that has been cooked at high temperatures. I found that such a mix (Miramar Greenery compost) did not work well in a previous experiment. (See my post, “Experiment: Comparing composts for vegetable seed starting.”)

Recipe 420 appears to have a slightly larger array of constituents compared to the others.

Ocean Forest looks like it is made of mostly peat moss and perlite. I can also tell you that it feels extremely lightweight when you hold it.

My compost? It’s just made of food scraps from our kitchen, garden scraps, wood chips, chicken manure, and a bit of dirt. It’s just stuff from our kitchen and yard, thrown into our chicken pen and scratched together and pooped on by the chickens over the course of a handful of months.

In the end, I don’t feel I can grasp good reasons for the disparity in performances between the mixes. But some previously sown tomatoes might give more of a clue.

The tale of the tomatoes

Back in January, before doing the above vegetable seed experiment, I sowed a few trays of tomato seeds in Recipe 420 and Ocean Forest. Here were the two sets of plants after about a month since sowing.

I hadn’t sown these tomatoes as an experiment. I didn’t sow the same exact varieties in each mix, for example. It nevertheless became clear that all the tomatoes growing in Ocean Forest were struggling. They looked like they were either missing a nutrient (deficiency) or had too much of a nutrient (toxicity). They were purple and yellow and stunted compared to the vibrant green of the tomato plants grown in Recipe 420.

On March 21, I decided to try to rescue some of the plants growing in Ocean Forest by transplanting them into bigger containers that I filled with Recipe 420 rather than more Ocean Forest. Here they were on the day of potting up.

Would the Recipe 420 mix somehow rejuvenate the plants?

Here they are this morning, 11 days later, on April 1:

Recipe 420 is a good mix, folks. It’s the one I will buy if I’m running low of my own compost. It’s also the one I will recommend to others, as I feel it has proven itself.

But my main take-away from this experiment is that no, you don’t always get what you pay for with potting soil and seed-starting mixes. The cheapest mix (Edna’s Best) and the most expensive mix (Ocean Forest) achieved equal results, both of which were inferior to the nearly most expensive mix (Recipe 420) and my homemade compost.

Finally, I feel bad about the results of Fox Farm’s Ocean Forest mix. I don’t mean to badmouth Ocean Forest (or Edna’s Best), a product that I imagine some good people have put their hearts and sweat into making. I’m open to the possibility that my experiment design was flawed or that I just got a bad batch of Ocean Forest. But until someone shows me so, there are my conclusions.

I publish this post in order to share with you the experiences I’ve had so that you can spend your money wisely and grow better vegetables.

“Can you start vegetable seeds in compost?”