Comparing my compost and Recipe 420 for starting vegetable seeds 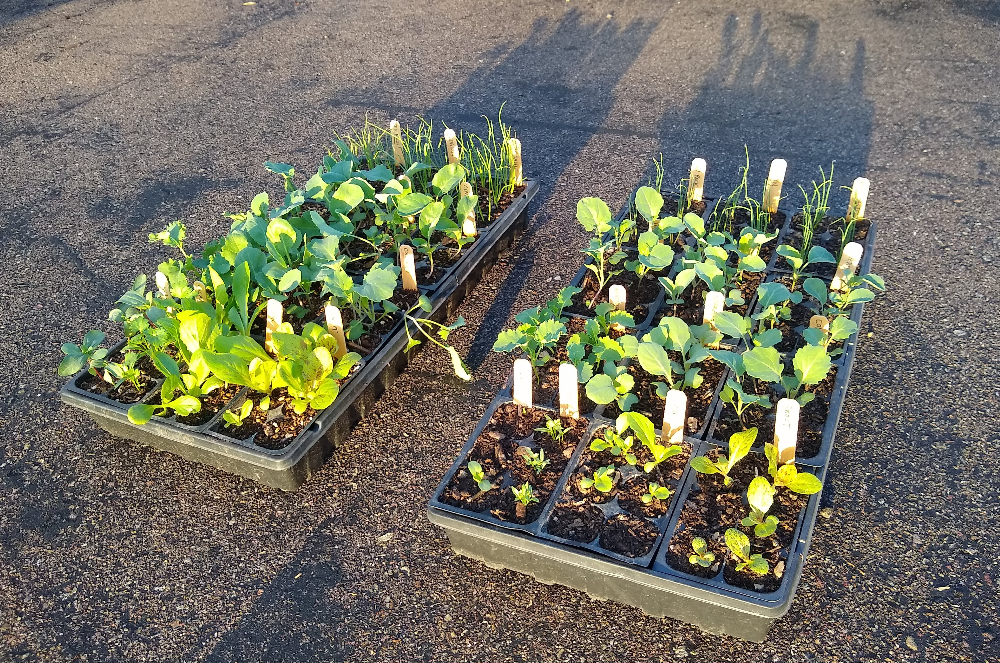 Can I find a mix that grows vegetable starts better than my homemade compost?

For years, I’ve been growing my vegetable seedlings in compost that I make at home, but I’ve desired to discover whether another mix might work better. I want to grow the fastest, strongest vegetable plants.

So last month I started an experiment comparing my compost to the most expensive, most lauded potting soil on the West Coast. Recipe 420 Potting Soil is made by E.B. Stone up in Northern California. It cost me $17 for a single 1.5 cubic-foot bag of the mix purchased at a local nursery.

Comparing the two, my main impression was that my compost felt denser and heavier. The Recipe 420 product felt very light, full of air, and fluffy.

What are they made of?

The label also says that a number of bacteria and fungi are added to the mix.

My compost is made of food scraps from our kitchen, garden scraps, wood chips, chicken manure, and a bit of dirt. It’s just stuff from our kitchen and yard, thrown into our chicken pen and mixed together and cool-composted over the course of a few months.

I wanted to learn which mix got the seeds to germinate faster and which produced faster growth after germination. I was also looking for which mix made the healthiest looking seedlings (vibrant green leaves, no discoloration on the margins). And I would look for how large and broad the root systems were within each mix.

What do you predict?

Five days later, on September 26, most seeds in my compost had germinated and some were beginning to grow true leaves, but the plants in the Recipe 420 mix were almost all bigger than their counterparts in my compost.

Unfortunately, at about this time I lost some seedlings in the bottom row (lettuces, zinnias, and cilantro). It looked like an insect munched the emerging leaves, thereby killing the plants. And it happened mostly to the sets in my compost — the lower right section in the photo above. So from that point on, I disregarded the growth of those sets in my evaluations.

On October 5, some seedlings were large enough to be put in the garden ground so I took some final photos and made some final observations. All seedlings grown in Recipe 420 were bigger at this point.

How much bigger were the seedlings grown in Recipe 420? I estimated that they were a couple days to a week ahead, and this turns out to be about the difference in the dates of germination. My conclusion was that the plants grew at the same speed in both mixes, but because they got started earlier in Recipe 420 they ended up bigger.

How about the appearance of the plants? I saw no difference. Both looked a deep green with no discoloration on their leaves. They all appeared to be in vigorous health.

As for the root systems, as expected, the bigger (older) plants grown in Recipe 420 had more roots. But were the roots broader or better in any way? Not obviously, although this was hard to discern because the Recipe 420 mix contains white bits of pumice that are the same color as the roots, making the rootball seem whiter and fuller of roots.

Regardless, in the end, Recipe 420 performed better than my compost at starting vegetable seeds and growing them up to transplant size. Recipe 420 is the winner!

Cause of difference in germination speed

Now I was curious as to why Recipe 420 engendered faster germination. My guess is that the magic was in its lightness and fluffiness. Tiny vegetable seeds don’t have the strength to easily push up a heavy roof overhead when they are ready to grow.

How to improve my compost

To improve the speed at which vegetable seeds germinate in my compost, I should modify a few things. I should sow the seeds shallowly (make the “roof” thin), incorporate less dirt (which is heavy) into the mix, and incorporate more light materials such as leaves.

Further, when filling the cells with my compost, I should leave the mix fluffier; I have been in the habit of using my fingers to compact the compost down into each cell before sowing.

Since I’ve found a product that grows better vegetable starts than my homemade compost, why don’t I just abandon my compost and use the superior Recipe 420? I might. But I love to learn and discover so what I’m more inclined to do is tinker with my compost recipe to try to improve its efficacy.

As for you, if you don’t already have a vegetable seed-starting mix that you’re convinced is the best, I recommend trying E.B. Stone’s Recipe 420.

Can you start vegetable seeds in compost?