How to cope with a heat wave

Just as there’s always a cold snap or two every winter, we get a couple heat waves every summer that challenge the plants. We just made it through a second August heat wave, where five days were over 95°. Two weeks ago we had four days over 95° and a new daily record on August 16 at 103°. I say we made it through because plants look little worse for the wear. Last summer, on the other hand, during the hot spell of early September the new Pinkerton avocado was almost killed, bell peppers and tomatoes got sunburned, and strawberry plants ended up with fried foliage. 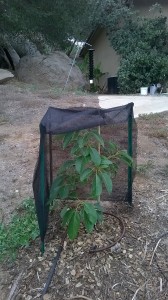 What did I do differently in the yard this time around? I put up this shade structure for the new Sharwil avocado tree. It consists of 60% shade cloth over the top as well as the south and west sides. Whereas the older avocados have some sunburn on some new leaves, the Sharwil leaves remained impeccably green. Even though August is not an optimal time to plant a new avocado (early spring is optimal), it can be done successfully as long as it’s given some shade on extremely hot days. It also needs to be watered frequently. I gave this newly planted tree some water every single day while the temperatures were over 95°.

Young avocados need water about as frequently as vegetables, I’ve found (every three days during normal summer temperatures in the mid-80s), and so I also watered the vegetables daily during the heat wave and the plants coped well. The strawberries had no burnt foliage. Last summer, I was overly influenced by the oft-repeated mantra, “Water deeply and infrequently.” So I was constantly watering a day late and applying more water than my sandy loam soil could hold within the root zone of avocados and vegetables. The plants showed me this through wilted foliage even after sunset.

To prevent sunburn on peppers this year, I planted them close together so the foliage would be dense and staked the peppers so they would grow more upright. It has worked. There have still been a few sunburned fruits, but much fewer than last year. 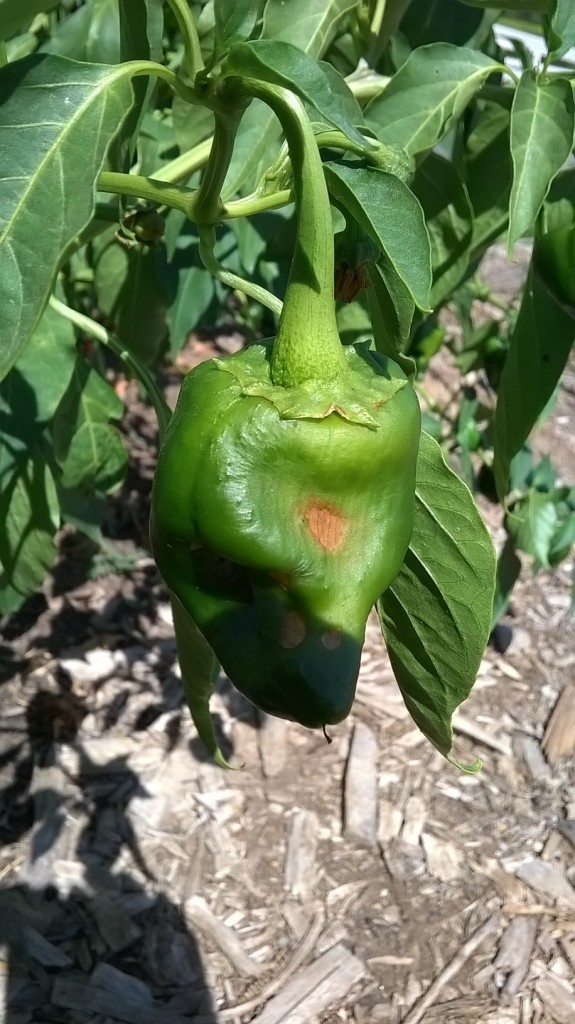 As for tomatoes, growing them more upright within cages has helped. The foliage has shaded the fruit more. There are only two fruits out of dozens with any sunburn; these two are hanging outside the cage — escapees. Compared to last year, when plants were allowed to sprawl much more, this is a great improvement.

Every climate has its advantages and disadvantages — two sides of the same coin. We now get a lot more sun compared to where we last lived; we’re twenty miles from the ocean but used to be barely two. So our oranges are sweeter, our vegetables grow faster and suffer less pest and disease damage. But a couple times every summer we get more sun and heat than is ideal. I’m still learning how to manage this abundance.

The only thing I’ll do differently next year to manage heat waves even better is add more drip emitters per plant for squash and corn. They grow to be so big when mature that they need an extra dripline at their base that can be turned on once the corn tassles and the squash plants set fruit. This summer I’ve had to give them extra water by hand to keep them happy.