Preparing a garden for a summer vacation 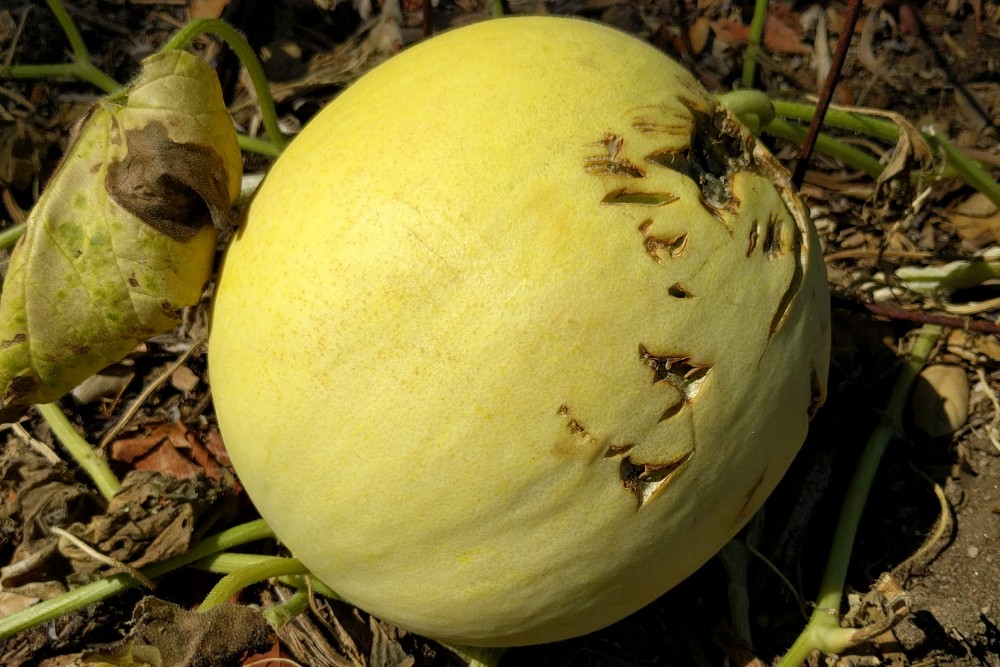 Most years, we spend a couple weeks visiting friends and my wife’s family in Oregon at the end of summer, and my garden has to fend for itself. How to prepare it for my absence?

I worked extra hard for this September’s vacation because it was going to be a full three weeks long. And I’ve found that the preparation boils down to managing two main things: getting water to all plants, and giving special care to young plants.

Watering while on vacation

Having all plants watered on an automatic system is ideal. Finally, this year, I had about 75% of the yard watered automatically. And almost all automatically watered plants grew well while we were away.

When programming the watering schedule for our weeks away, I set it to water a bit more than I would have if we had been home.  I knew a heat wave was likely, and I wouldn’t be around to add the extra water at that precise time. This programming turned out to be a smart decision, judging by the weather that followed (near 100 two times during those three weeks) and the overall perky look of the plants upon returning home.

As for the plants that I was not able to water automatically, they all survived. I mulched them thickly and watered them deeply prior to leaving. That was the best I could do under the circumstances. These plants include all of my deciduous fruit trees as well as my grapevines. 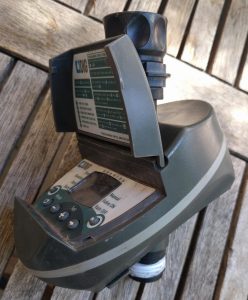 In fact, I had this hose-end automatic watering device made by DIG that I could have installed — should have installed. These things only cost about $30 and can save a lot of time, work, and grapevines. Next time.

Not wanting to lose three weeks of turning the sun’s energy into food, I sowed a variety of vegetable seeds before leaving. Some of them thrived while others completely failed.

All of the small seeds failed: lettuce, carrots, greens, broccoli, and cauliflower. Such small seeds need very attentive (frequent) watering in summer while they’re germinating and soon after. Most of these seeds had just germinated when we departed. At that point, they were left on the watering schedule of mature vegetables, which was only three times per week. This was too infrequent. In the future, I will only sow small-seeded vegetables three weeks or more before taking a summer vacation.

On the other hand, the big seeds performed well. I sowed both corn and peas, after soaking the seeds for about 24 hours, and I returned to find happy plants. 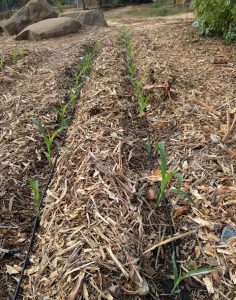 ‘Martian Jewel’ corn seedlings on the day we left. 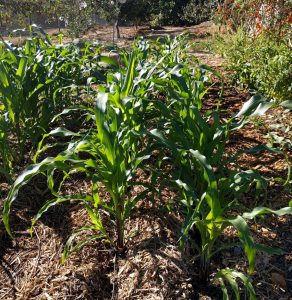 Same corn on the day we returned, 21 days later.

I also put in a few new fruit trees in the couple weeks before vacation, and I returned to find some growing well even though they were being watered on the infrequent schedule of mature trees. The ones that grew well were those I’d put shade cloth over. See, for example, this avocado seedling. 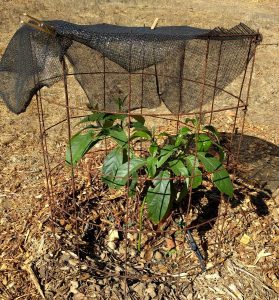 Fortunately, the ones that got burned were bananas, and bananas are tough; they will recover well.

Oh yeah, what about that scratched up honeydew melon at the top? That was how a possum left its mark while we were away. Pests don’t vacation when we do.