Volunteers show when to plant vegetables 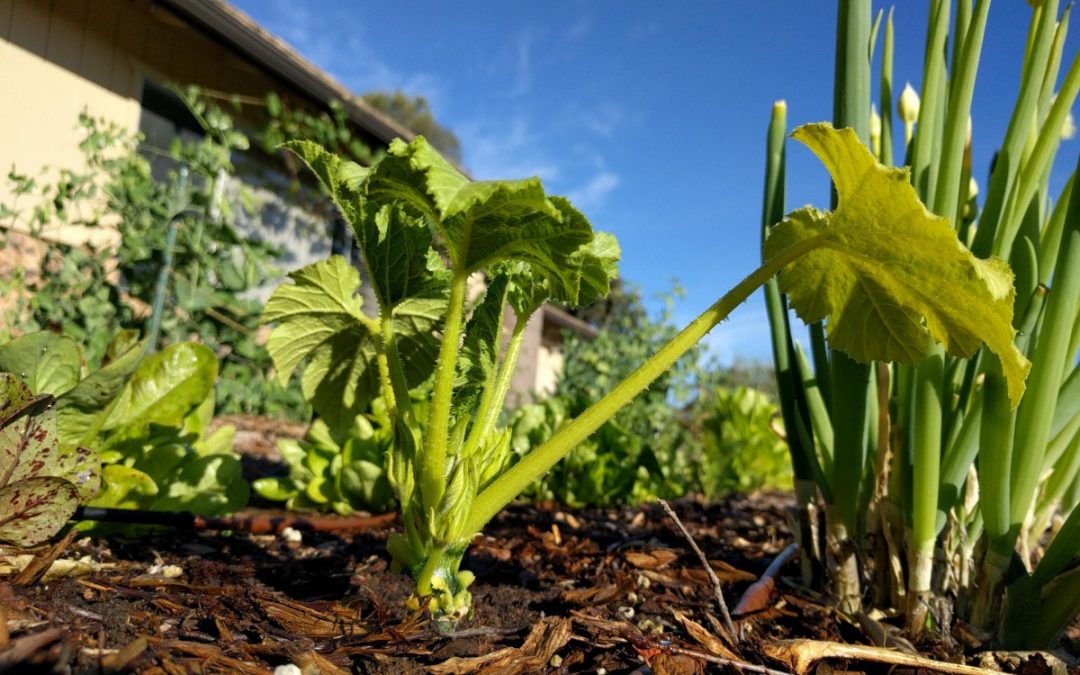 I brought this ‘Clarimore’ zucchini plant back from a tour of Brijette Peña’s urban farm, where she grows vegetables for seed and trials varieties for her San Diego Seed Company. Peña sold it to me as a seedling in a four-inch pot. But when I got home that afternoon I didn’t plant it. I set the seedling beside my other vegetable seedlings, unsure of whether April 3 was quite time to put a zucchini plant into my garden soil.

How do you decide when to buy and plant different vegetables? Are you guided by what is for sale at the nursery? Not the best idea even if it’s a good nursery. (See my post, “Oh, the mistakes I’ve made: Planting vegetables at the wrong time.”) Very risky method if you’re shopping at a non-nursery that sells plants, a place like Home Depot. At such places I too often find vegetable seedlings that shouldn’t be planted at that time.

Or do you follow a vegetable planting calendar? I often do. I refer to the one in the Sunset Western Garden Book. I use Vince Lazaneo’s Vegetable Garden Planting Guide.

Moreover, I’ve come to realize that timing is so decisive to success in a vegetable garden that for the last couple years I’ve spent a bunch of time creating and printing my own calendars that advise when to plant each vegetable.

Well, aren’t you dedicated? And doesn’t your special calendar then tell you if April 3 was time to plant zucchini?

Yes, it does. It does say that all of April is green-light-go for putting zucchini (squash) in the ground. Yet! That’s not the main reason my ‘Clarimore’ zucchini plant is now in the ground. This is:

A couple days after the farm tour, I was walking through the yard when I noticed this squash plant growing where I’d had a compost pile last year. It’s a volunteer. It’s up and growing on its own, drinking from whatever rainfall is left in the soil.

Trust the calendar but verify via volunteers

As trustworthy as I know my calendar is — I made it using a decade of detailed notes on vegetable plantings in various gardens in Southern California — plants don’t struggle or thrive according to the date or advice of a calendar. Vegetable seeds germinate and grow according to the environmental conditions that surround them. This includes most importantly the temperature of the soil and air.

And as we can feel (and remember), the temperatures nowadays are not the same as they were this time last year. On my calendars I record high and low temperatures taken by a thermometer next to my vegetable garden. Averaging the daytime highs for the first half of April last year comes out to be 77.3 degrees compared to this year’s 74.2 degrees, making this year three degrees cooler.

Using the data on soil temperature from the CIMIS station in Escondido’s San Pasqual Valley (a typical Southern California valley), we see that the average soil temperature for March 2018 was 61.5 degrees while this past March averaged 59.8 degrees. So the soil is almost two degrees cooler going into this April.

The weather is a little different every year, and a calendar can’t perfectly accommodate this. Reading the signals coming from the plants around us complements and corroborates — but should also supersede — a calendar’s advice.

If the volunteers have started growing, you can surely plant on purpose.

After noticing the volunteer squash plant, my eyes were tuned into noticing other volunteers. At the canopy edge of our Valencia orange tree, I then saw some corn plants growing.

The corn I sowed in the garden ground on March 22 is a bit bigger, but I’d say — judging by the growth of the volunteer corn — that the corn sowing date is confirmed as an appropriate one for this year.

Every gardener has volunteer tomatoes pop up, right? I just found this one:

Comparing it to the tomatoes I sowed on January 25 (indoors) makes me feel confident about the timing on these too.

Back in that old compost area, almost hiding under the large leaves of a volunteer squash plant, I also noticed watermelons volunteering.

The ‘Arava’ melon plants I sowed on March 18 (in trays that I brought into the garage at night) are about the same size.

Looks like that was good timing, and I can safely plant the melon seedlings in the soil now. The volunteers testify that it is suitably warm.

Seeing any volunteers around your yard these days? Take note of when they sprout and follow their lead now or next year.

Not seeing any volunteers around your yard? Then stop being so tidy!

Should you grow vegetables from seeds or plants?

What to do in a Southern California garden in April