Why I still grow food at home 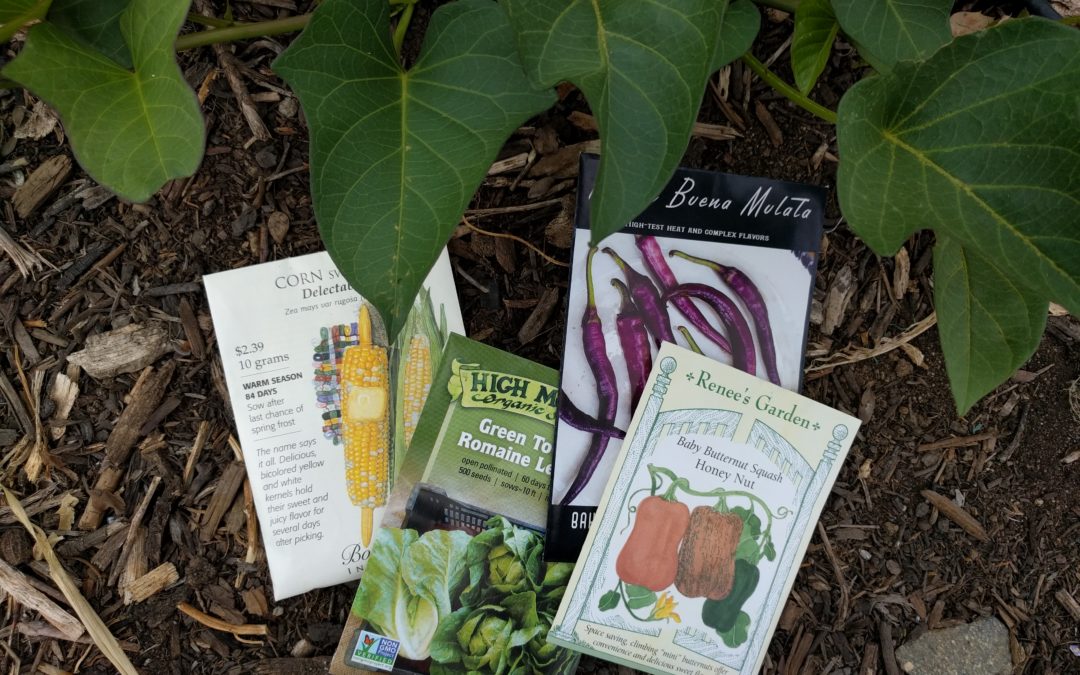 Sometimes gardening feels like a leisure activity, but sometimes it feels like work: weeds, aphids, gophers, heat waves. At which times I think, Why not just buy all my food at the grocery store? It’s so convenient. You show up anytime and choose from all sorts of fresh stuff with the only effort being driving to the store. Yeah, but . . .

There are a lot of good reasons to persevere in the gardening adventure despite the obstacles of weather and pests and so on. Here are ten that come to mind:

My friend bought an apricot at the store the other day. It was terribly bland, he said. A waste of money. Apricots are notoriously delicate, and in order to get one from a farm to a store shelf, it must withstand a lot of handling and transportation, so they’re picked before they’re ripe so they’re still firm enough to survive the journey. Apricots don’t sweeten up after they’ve been picked. On the other hand, the Blenheim apricots on our tree can spend as much time as necessary becoming rich and sweet because they need to only travel about six inches, maybe two feet at the most, from a branch to our mouths. 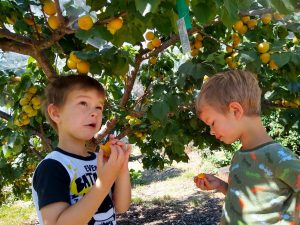 I overheard a man in the grocery store a couple weeks ago ask the produce manager if they had any more of those “Dinosaur eggs.” He said his son loved them. They’re the only variety of pluot I’ve ever seen in grocery stores, and they’re also known as Dapple Dandy pluots. I love them too, and so do my sons. But there are numerous other delicious and distinct pluot varieties. In our yard, we have three as of today. We may need even more. 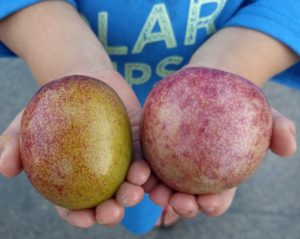 Some parents have difficulty getting their kids to eat vegetables at the dinner table, and so do I. Strangely though, they eat raw vegetables in the garden with alacrity. On their own, they’re constantly pulling carrots, picking peas, even munching on heads of broccoli and cauliflower. I’ve often wondered if children were meant to graze. 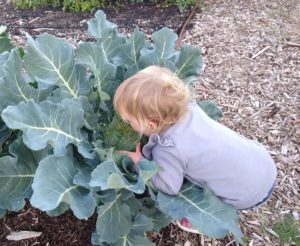 Pesticides, herbicides, fungicides. They’re sprayed on crops and injected into the soil on most farms — even “certified organic” farms. (Organic certification only entails that farmers use a different set of government-approved concoctions. See the USDA’s explanations here. Also, see my post, “What is organic, actually?”) You never know what has been put on your fruits and vegetables; no farmer or grocery store is required to announce such information. But I like to know what I’m eating, and especially what my wife and children are eating.

It used to infuriate me to buy a handful of avocados at the store and find upon cutting them open that half were rotten inside. In a fit of such anger I wrote a post titled “Mexican avocados suck”. (In a similar mood, a University of California farm advisor wrote a similar rant here.) On the other hand, rarely is an avocado from our trees anything but perfect inside. It’s not because I’m a great farmer, it’s just that our avocados don’t need to be trucked and refrigerated and gassed with ethylene and squeezed to death by shoppers. 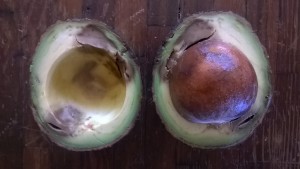 The last Mexican avocado I ever bought. 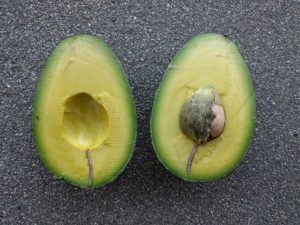 The last Hass I picked from our tree this year. Here in mid-August, it is over-mature (see the root extending from the seed), but it still has no rot.

There’s a lot less going to the landfill or recycling facility when food comes out of the garden. When we eat our Sungold cherry tomatoes we’re usually standing beside the vines, but sometimes we pack them in a Tupperware container so we can eat them as a snack on the road. Buy cherry tomatoes at the store and you buy a plastic clamshell with an absorbent towel at the bottom. Getting the tomatoes from the field to the store requires a bunch more containers. Ever seen the dumpsters behind a grocery store? 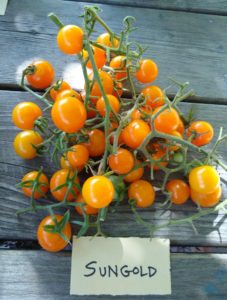 Who eats the tops of carrots? Chickens! They don’t go into the trash or get trucked to a composting facility as they would on most farms or in most grocery stores. Here at home, they go to the chickens — a few steps away — where they’re turned into eggs, plus manure/compost as a byproduct. That’s cool, and efficient. 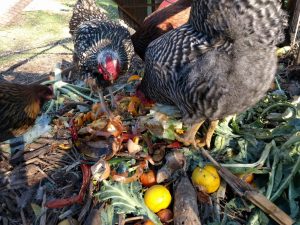 A garden is prettier to me than any lawn or ornamental landscaping. This is the view of our front yard from the living room window. Here in August, we see grapes and corn and basil and peppers and sunflowers and tomatoes and more. I have never understood the inclination to hide vegetables and fruit trees in the back corner of a yard. 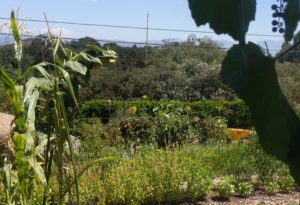 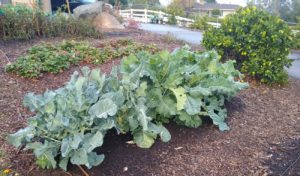 Bed of broccoli and cauliflower.

What? Can’t be. Can be! Is be! The other day I’d planned to make breakfast burritos for dinner — eggs, beans, and cheese — but I recognized that they really needed some salsa to be complete. We didn’t have any salsa. But we have a garden. I walked out the door and picked all sorts of fresh stuff: tomatoes, peppers, onions, herbs. A little chopping and roasting later, I had quite the complement for our burritos.

What keeps you gardening?