The Economics of Homegrown Broccoli

I’ve long assumed that it is more expensive to grow vegetables at home compared to buying from the grocery store. I do it for other reasons, I tell myself. I feel rich having food growing around the house, I like getting my hands in the dirt, it’s fun to send friends home with some produce after they visit, and I know what’s in and on the food I eat from the yard.

However, I realized that I’ve never actually done the math. Thomas Sowell spurred the thought — I’m reading his great book, “Basic Economics.” Where are the hard facts? as he asks.

At a couple of grocery stores I noted prices on broccoli, which is what we happen to have a lot of in the yard at the moment. At Albertson’s, it was $2 per pound. I weighed a small head and a large head, and they were 0.75 and 1.75 pounds respectively. Therefore, a small head would cost $1.50 and a large head $3.50. Then I checked prices at Whole Foods. They didn’t have heads of broccoli, but they were selling bunches of about ten side shoots each for $3. The bunches were about the same size as a medium head, so let’s think of it as $3 for a medium head at Whole Foods.

That’s the cost of broccoli at the store; now what does it cost me to produce broccoli at home? This year, I started some from seed and some as transplants bought at a nursery, but for simplicity’s sake let’s only use the cost of the transplants, which were $3 for a six-pack, or $0.50 per plant.

The plants needed water. But since they were grown during our rainy season the water inputs were small. I planted on September 19, and then I irrigated a total of 18 times before the rains became consistent enough to make irrigation unnecessary, and I began harvesting in December. The total irrigation per plant before December was about eight gallons, costing me $0.06.

How about labor? In addition to planting the seedlings, I added compost to the soil surface, and I programmed the automatic irrigation system. I actually never had to weed because the beds I grew the broccoli in have been well cared for in the past. And then I harvested. Per plant, the total work might have taken four minutes. (Important note here: I encountered zero pest damage this year even though last year I lost some broccoli plants to rabbits and later in the season some plants suffered aphid damage. But let’s just talk about this year’s facts.) What was my four minutes of labor worth? I could’ve been teaching, where I make about $30 per hour, in which case four minutes to me is worth $2.

Again, I found that a small head at the store cost $1.50 and a large head cost $3.50, but broccoli plants grown in the yard produce much more than just a single head of any size. Mine were the variety ‘Premium Crop’, and they produced two to three medium-sized heads plus side shoots for months thereafter. (It’s mid-February and I’m still harvesting side shoots galore.) 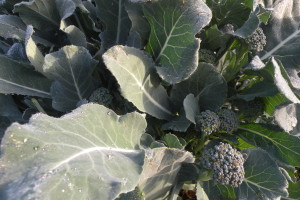 By these calculations I’m ahead a minimum of $4.24 per plant. And that really surprises me. While it surely varies year to year and plant to plant, this year homegrown broccoli is not just cleaner and fresher than broccoli from the store, but more economical as well.