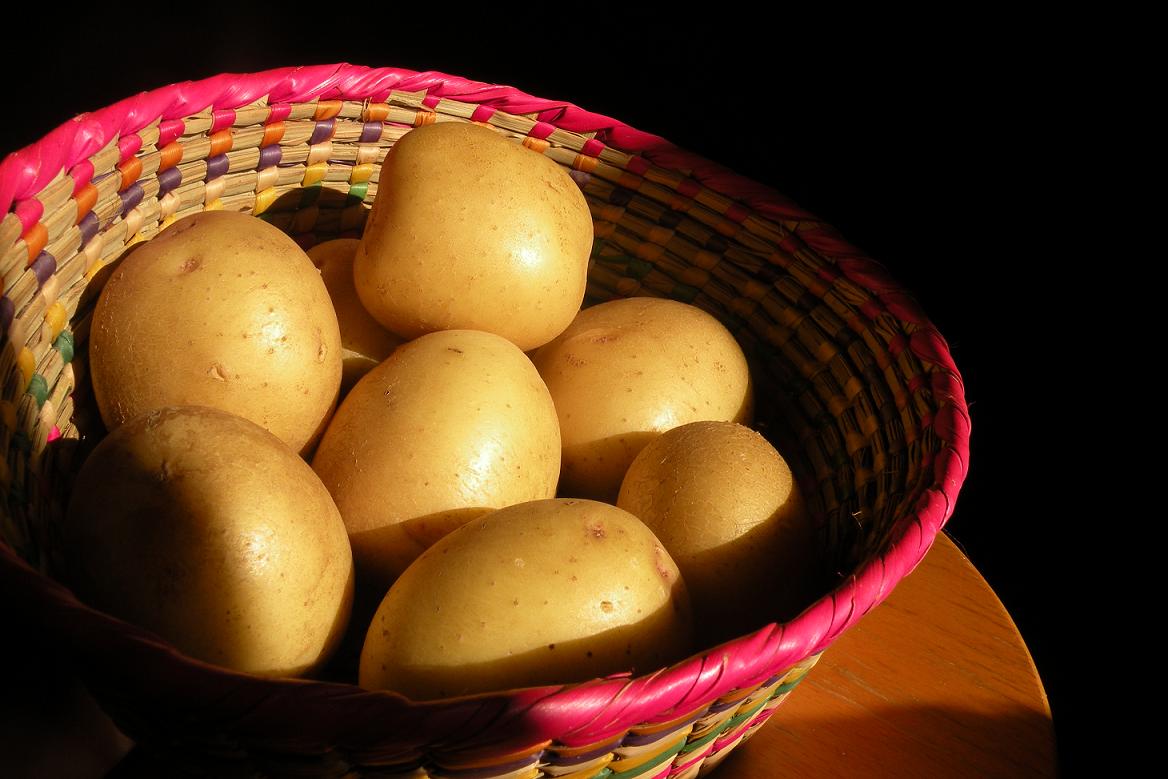 I just watched the Amazing Race, where they traveled through Peru, and it reminded me of how much I like to grow potatoes. Compared to potatoes, most other staples can be laborious to get from the ground to your dinner plate. Wheat, for example, takes a lot of work to dry and thresh and grind into flour unless you have machinery. Potatoes, on the other hand, can nearly grow without you paying attention, and harvesting them is fun like digging for treasure.

What follows are my personal notes on what I’ve learned about when and how to grow potatoes in Southern California, after having grown them for many years in different yards in the region.

The best planting time is February. But I think of potatoes as having two seasons here — one is August into early September for a late fall or early winter harvest, and the other is February for a late spring harvest. (The photo above shows Yukon Gold potatoes that I planted in February 2015 and harvested in late May.)

While I’ve certainly gotten good crops out of planting in August, I’ve gotten consistently better crops from February, for a couple reasons. Growing from February takes advantage of the rainy season, so less watering is necessary. February planting also requires less attention to the plants generally. For example, my last August crop suffered from spider mites because I used drip irrigation and there was no rain to wash the foliage off and I failed to bring the hose out to give the plants a shower frequently (mites infest dry, dusty foliage).

Many sources claim it’s vital to use seed potatoes that are certified disease-free, but for so long I’ve grown some of those alongside seed potatoes that I bought from the grocery store that were intended to be eaten, as well as seed potatoes taken from a previous harvest of my own. And I’ve never noticed a significant difference in plant performance, disease, or tuber yield.

(What’s a “seed” potato? It’s just a potato, really, except that it is intended to be used for planting instead of eating. You can buy potatoes that were grown specifically to be used as seed. Or you can buy a potato at the grocery store, go home and stick it in the ground and thereby have turned it into a seed potato.)

(Where to buy seed potatoes? Independent nurseries often have them, and I’ve also bought them from Territorial Seed Company in Oregon.)

Many times, I’ve had good results planting potatoes in August right at the base of recently harvested corn. This has become a regular rotation in my garden. In the spring, I plant corn one foot apart, and then in August after the corn harvest, I plant a potato at the base of each corn stalk — so, also one foot apart. The results have always been good. Potatoes seem to like following corn.

You’ll notice that I didn’t cut up my seed potatoes above, as is often suggested. Mostly, I don’t do it because it’s more work, but sometimes I do it if I don’t have enough whole seed potatoes for the space I want to plant.

Over the course of the plants’ three to four months of life, it’s usually necessary to hill up a little dirt or mulch around the base because the potatoes develop there and you don’t want them to be exposed to the sun. If the potatoes are exposed to the sun, they turn green and toxic. I usually heap up some dirt or mulch on them twice — once when the plants are around six inches tall, and then again when the plants are about a foot tall. If I see a tuber showing at the base of a plant at any time, I’ll cover it immediately.

These days I use in-line drip emitter tubing where the emitters put out 0.5 gallons per hour and are spaced one foot apart. I plant each seed potato one foot apart so there’s one emitter per plant. At first, I wasn’t sure this would saturate a big enough area in my sandy loam soil, but it works just fine.  While small, potato plants don’t need much water. But once the plants are about a foot tall, I give them approximately as much as my local evapotranspiration rate; in other words, about as much as most other vegetable plants.

At the beginning of each of my drip lines I have a shut-off valve so I can quit watering the whole row of potatoes once the plants are full sized and the leaves are starting to yellow. (Sometimes, potato plants flower before their foliage begins to yellow.) That’s the indicator for harvest time: the potato plant foliage starts dying.

Harvesting is easier when you can dry out the soil around the potatoes for at least a week or two prior. The tubers then pop out of the dirt very cleanly — no cakey mud on them that needs to be scrubbed off.

In mid-December, 2015, the foliage of my potato plants were damaged by frost, but I waited to harvest until December 29. The tubers were all perfect, as if they were just being stored in the soil. However, once the plant foliage is significantly damaged by frost, the potato tubers aren’t going to grow any larger. The lesson is that for fall potatoes you need to get the plants going in August or early September so they have enough time to grow and mature tubers before a cold December night.