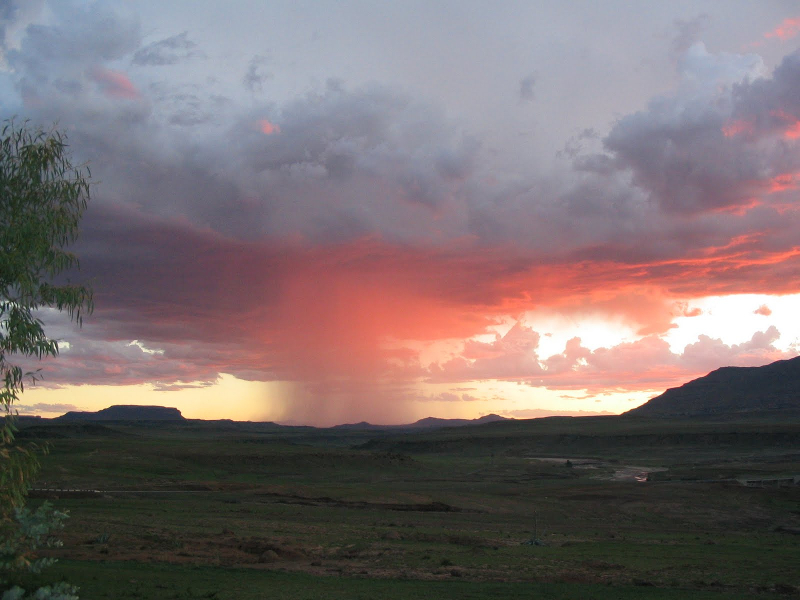 We had spent the afternoon swimming in the Tsoaing river, which would swell with water after each summer rain, and we were hungry. Masopha led us to his family’s field nearby where they were growing corn with watermelon underneath. He picked a couple of watermelons. We split them open on rocks and ate them as we walked back up to the school where we lived.

That’s my earliest recollection of noticing crops being interplanted. Corn with watermelon. That was when I lived in Lesotho, Africa.

I’ve tried many combinations of interplanted vegetables in my Southern California gardens since. Below I list some that I like most, and why, so that maybe you can try them.

Tomatoes with carrots. I have used this combination with late-season carrots. For example, this year I sowed a row of carrots on March 4 and then planted a row of tomatoes right beside them on April 9. Carrots don’t need full sun to grow well once the days are long and the weather is warm in late spring so they don’t mind some afternoon shade from the developing tomato plants above them.

Tomatoes with cilantro. This combination works well because cilantro doesn’t like the warm weather of our summers that the tomatoes love, but the tomato plants quickly grow over the cilantro and provide afternoon shade.

Carrots then tomatoes then cilantro. In fact, you can grow a succession of interplants with these three crops, which is what I did in one bed this year. First, I sowed carrots and then planted tomatoes as I mentioned above, and then once the carrots were all harvested I planted cilantro in between the tomatoes (on June 13).

Brassicas with cilantro or parsley. Brassicas are broccoli, cauliflower, cabbage, and Brussels sprouts (and a few others). They are plants that grow up to four feet wide. When you plant them, you want to space them at least 18 inches apart. But how to use the space between the young brassicas while they’re still small?

An herb like cilantro or parsley does well between brassica plants because you can start harvesting the herbs very soon after planting, long before the brassicas get big and shade them. Also, cilantro and parsley like to grow in the cooler seasons of the year just as brassicas do.

Brassicas with lettuce. Lettuce is one of the best interplants for brassicas. Lettuce also prefers the cooler seasons of fall, winter, and spring so you can plant both at the same time. And lettuce grows fast. By the time the brassica plants around the lettuce start crowding it, it’s time to harvest the lettuce head. Or, if you are doing the cut-and-come-again method of harvest with lettuce or picking single leaves, you have already had many harvests before the brassicas take over the space.

Peppers with lettuce. This combo is similar to the tomatoes and cilantro combo. Lettuce doesn’t like summer heat whereas peppers do, so you allow the peppers to grow a foot or so high and then plant lettuce between them. The larger peppers then give some shade to the lettuce. I followed this schedule this year by planting a row of peppers on April 9 and then lettuce on June 13.

Another benefit of interplanting: efficient water use

Let me pause here to point out another benefit of interplanting beyond making good use of garden space and giving some plants a break from strong sun, as the above examples show. Interplanting can also aid in the efficient use of drip irrigation.

When you plant tomatoes or brassicas or other large vegetables, you must space them out to accommodate their eventual mature size. Maybe you space them two feet apart, for instance. But it’s likely that your drip lines have emitters closer together than that, perhaps every nine inches or every foot apart. In this case, if you irrigate with the drip lines after planting the tomatoes or brassicas you will be wasting water from the intermediate emitters for weeks until the plants’ roots grow out enough to access it.

Not with interplants. The interplants (think: lettuce between the brassicas or cilantro between the tomatoes) will use the water from the intermediate emitters until the big plants need it.

Now back to the combinations I like. Two more . . .

Corn with potatoes. This is more of a succession planting than an interplanting, but here is why I’ve included it. Late summer is a good time to plant potatoes in Southern California, but the soil is very warm in late summer and potatoes prefer it on the cool side (between 60 and 70 degrees is usually cited as optimal). What I do is grow a crop of corn and then right about harvest time I plant the potatoes right next to the base of each corn stalk. From there I make sure the corn still has enough soil moisture to get through harvest, but as soon as possible I stop watering the corn. The potatoes in the ground below do not need much soil moisture to sprout and get growing. The dying corn stalks continue to provide shade as the potatoes sprout in the relatively cooler soil below. I only remove the dead corn stalks once they start falling over or when the growing potato plants below need more sun.

Sunflowers with peas. There’s a fun story about how I discovered this effective combination. Rather than repeating it here, I’ll direct you to it in my post, “Gardening with kids.”

Speaking of sunflowers, a few years ago I noticed in a friend’s garden that he had interplanted sunflowers with lettuce in June, using the sunflowers for light shade over the lettuce as I had done with my peppers shown above. This combination seemed to be working well.

There must be myriad other combinations of plants that work well in our California conditions. Let me know if you have tried any that you like. Let’s get interplantetary!

There are no ads on The Yard Posts because readers like you directly support my work. Learn more HERE