The economics of my rain tank

Last winter was my first with a 530-gallon rain tank. I did not buy it because I thought it would save me a bunch of money on my water bill. I bought it because rain coming off my roof and running down the driveway irritated me. It seemed wasteful. Water is scarce and expensive in Southern California. But now I find myself wondering whether the rain tank will eventually pay for itself. 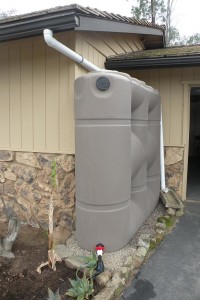 The tank is a Bushman Slimline, and it cost $615. The accessories needed to connect it to the gutter and direct overflow (pipes, joints, straps), plus a ball valve to distribute the collected rain into drip lines that irrigate my vegetable garden and some fruit trees, as well as the gravel for the tank’s foundation all cost about $30. So, excluding my time and excluding sales tax, the tank system cost $660.

The tank collects from a 363 square-foot section of roof covered in concrete tiles, which have an efficiency estimated at 65%, meaning 35% of the rain that falls on the roof is not shed into the tank. In other words, though 226 gallons fall on this area of roof per inch of rain, only 147 gallons are shed into the tank.

Similar to desalinated water, rain has very low levels of salts, and rain is more valuable to plants than our municipal district water. I think we already know this from experience. We give the plants in our yard a couple inches of water from a sprinkler and the plants look good, but after a real storm rolls through and drops a couple inches of steady rain our plants look amazing — they’re standing so tall and firm and shiny — and they don’t seem to need more water for weeks. There’s something magic about rain.

So, what if I value the rain that I collect in my tank at twice the price of district water? At that rate we’re looking at just under 19 years until it pays for itself. That’s still a very long time.

The price of the water from the district keeps going up though. I just got a letter informing me that the rate will increase again on September 1. This rate that becomes effective on September 1 will be a 20% increase from the rate we paid when we moved in only two years ago. That’s a 10% rise per year, so far.

If I use the rate that will be effective in September (and continue to value rain at twice as much as district water), the tank and its system will pay off in about 15 years.

Furthermore, as far as I know, the price of water in my district has never gone down. I’m guessing that it will only continue to rise. If it continues on its trajectory of 10% per year, then we’re looking at a pay-off length of ten years.

Ten years is still a long way off, but it does sound reachable. And even though I didn’t buy my rain tank as an investment (thinking it would save me a bunch of money on my water bill), I do now feel less indulgent about my purchase.

Rain is not sewage