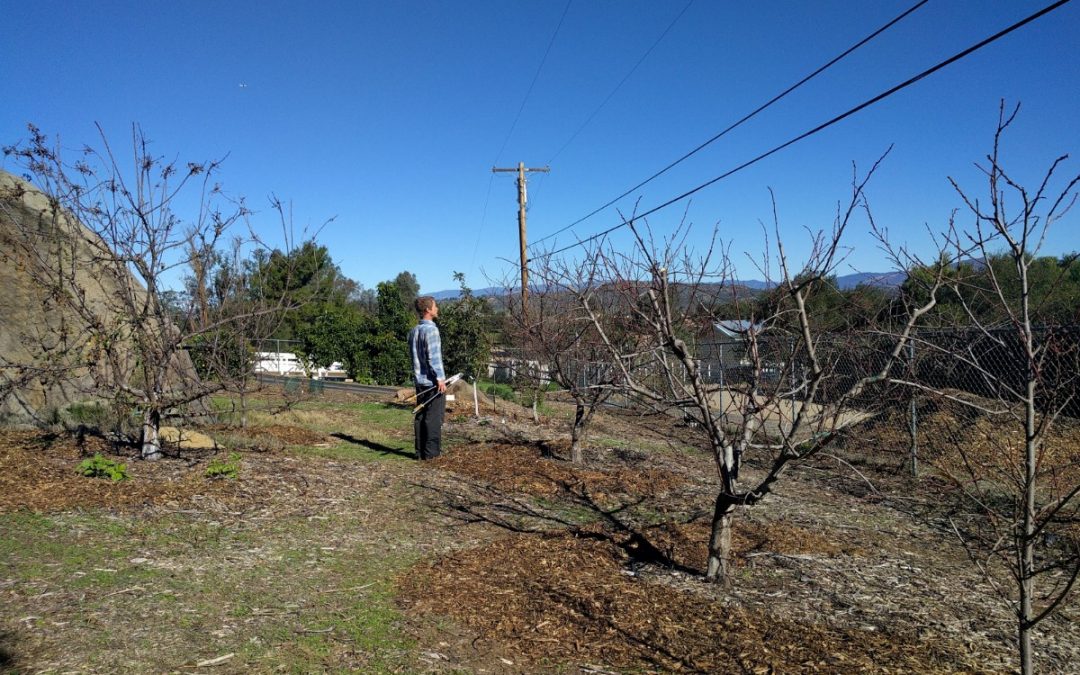 Myriad smaller thoughts also go through my mind, but my overarching thought is about imagining rays of sun hitting the tree’s canopy and working their way down and in. The reason is simple: no sun, no fruit.

Branches on a fruit tree make fruit if they receive sufficient sunshine. Branches in too much shade make less fruit, then no fruit, and eventually they die.

The job of pruning can feel complicated so it’s useful to have sunshine as the focus. Our main job in pruning is to bring sunshine to the branches where we want our tree to make its fruit.

In this post, I’ll show you how to bring the sunshine where its needed, and I’ll show some examples of when this has been done well and not so well.

This is my Snow Queen nectarine tree before any pruning this winter:

When I looked at this tree I saw the sun’s rays hitting the top branches and being absorbed by lots of leaves. I had to imagine the leaves, of course.

Here is the tree in full leaf in June. This is what I was imagining.

I was imagining the sunshine hitting two areas of the tree: the top and the sides. See how the branches at the top get as much sun as they could ever want, but how the bottom branches are in a bit of shade? Imagine also how much sunlight is getting into the middle of that tree. Less than on the sides, obviously. These are my two concerns: bottom branches and interior branches.

Let me step back for a second to say why I care about these parts of my trees. My goal in growing a fruit tree is to get lots of fruit, all of it within reach.

Therefore, I want my tree to make its fruit from the height of my reach almost down to the ground, and I don’t want any dead, wasted space in the interior of the canopy.

If a tree is pruned right, with sunshine in mind, then even the shortest among us will have access to all the fruit that their tiger bags or diapers can hold.

So with this Snow Queen nectarine tree I pruned some branches out of the top so enough sunshine would get to the bottom branches, and I also cut out some branches on the sides. Look at how this side of the tree was wider at the top compared to the bottom.

Not good. The top should be narrower than the bottom. The tree cannot have the shape of a martini glass or else those lower branches are in too much shade and they decline.

So I cut out this many branches:

And now the tree looks like this and is about finished. I’ll still shorten a couple of those smaller branches on top later.

Trees not pruned this way

What if I hadn’t cut out those upper branches? Look at this nectarine tree that I saw in a school garden.

The fruit will be located higher and higher every year, and the lower and interior branches will become less and less fruitful every year, eventually dying off because of the lack of sunlight.

This apple tree at a friend’s house in Oregon is twenty feet tall and bears most of its fruit out of reach. I had to pick the apples from this tree for the kids.

Next to my mature Snow Queen nectarine tree is a young SpiceZee nectaplum tree. It has been in the ground for only two years.

Despite the difference in training style, my thoughts when approaching the tree for pruning are the same: how are the sun’s rays working their way through the branches?

And here’s what I notice: The top is a little too thick and wide. But wow! That’s it. This tree needs almost no pruning.

I’ve found this to be the case more often with a central leader tree than an open center tree. Trees trained with a single, dominant, central trunk, and side branches that form the pyramid shape tend to be calmer and need less pruning.

No need for loppers here. Just a handful of small branches thinned and headed was enough. All finished.

Plenty of sun will now shine throughout the canopy, from top to bottom, side to side.

You can have too much sunshine

Before I leave you, do be aware that your pruning can bring too much sun onto a branch. I’ve done this myself. It usually happens to open center trees or any tree that has a branch that is very horizontal.

Make sure to keep branches that will shade these vulnerable branches somewhat. Otherwise, paint them with white latex paint as a sunscreen.

Would you like to complicate your pruning? Or, a better way to put it might be, would you like to prune even more effectively? Here are a couple posts that focus on other aspects of pruning deciduous fruit trees:

Don’t cut off the fruiting wood: pruning lesson number one

Where to cut a branch on a deciduous fruit tree

Should you prune a bare-root fruit tree?