Controlling aphids on broccoli and cauliflower: an experiment with the kids 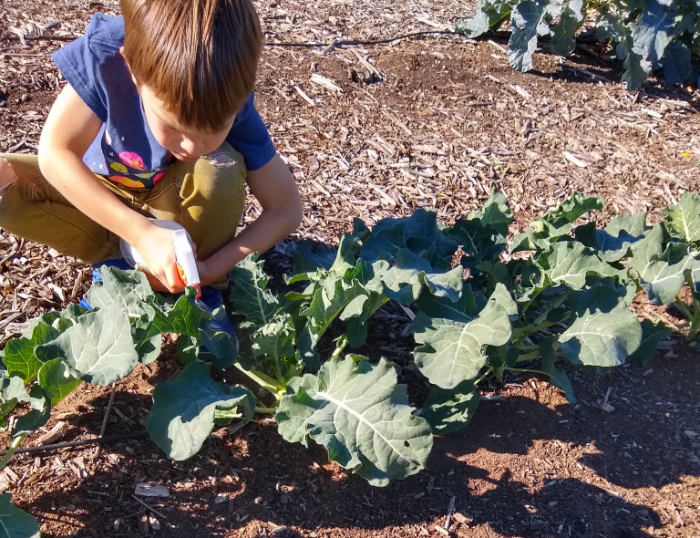 I’d long heard of people using dish soap mixed with water to spray on broccoli and cauliflower in order to control aphids. I was curious to test that out. In early January, I had a row of plants and I had three kids that might enjoy helping me experiment.

I wanted to test using soapy water against my usual method of spraying aphids off with a strong water stream from the hose. I asked if the kids had any other methods they wanted to try and my five-year-old son suggested trapping the aphids by putting some broccoli or cauliflower inside a trap. Because I couldn’t figure out how to build such an awesome mechanism, I settled on a different form of his suggestion by simply leaving some plants in the row alone so that maybe the aphids would concentrate on those “trap” plants more than those being sprayed with soap and water.

So those were our three methods: trap, soap, and water. The kids made labels and we randomly assigned them to plants.

Before getting started, we used a hand lens to get a closer look at the aphids we would be dealing with. Seeing the critters enlarged was fascinating to two out of the three kids; my oldest was grossed out and then no longer wanted to uncurl leaves to get access to the aphids for spraying since he might get some on his fingers.

It was on January 11 that I filled a plastic spray bottle with 16 ounces of rainwater plus a short squeeze of Mrs. Meyer’s Clean Day Dish Soap, Lemon Verbena scent (which is what was on the kitchen counter that day). As a team, we took turns spotting aphids on the plants — none of which had begun forming heads yet — and spraying the aphids with the soapy water.

Also on January 11, we commenced blasting aphids off leaves using a brass shut-off valve at the end of a garden hose. Rather than killing aphids in place, this technique knocked them off the plants. We saw that most then never crawled back up or flew back onto the plants. New aphids later appeared on different parts of leaves. Where the old aphids had been living and feeding was obvious as it was yellow.

It wasn’t until February 1 that we noticed a difference between the amount of aphids on the three different treatments. At this time, it became clear that most of the trap plants were becoming infested compared to the plants we were spraying and blasting.

On these trap plants we began to spot aphid mummies — brown, hollow aphid skeletons — and we got a closer look using the hand lens. These mummies had been parasitized by the wasp Diaeretiella rapae, presumably.

Without the need for a hand lens, one day we watched a syrphid fly visiting various colonies of aphids on the unsprayed and unblasted broccoli and cauliflower leaves. We (I) guessed that the syrphid fly might have been laying eggs near the colonies so its larvae could later feed on the aphids.

Here the kids learned about the various ways that various insects use and eat one another. The lesson for us was that our yard’s plants and animals are connected in ways that only reveal themselves when you slow down to observe.

Here on February 19 our harvest is about over and the results are in. It was plain as day that the trap plants generally had more aphids than those treated with soap or water.

Generally. One broccoli trap plant harvested on February 9 had almost no aphids, inexplicably.

The sprayed and blasted plants all produced heads that appeared to have almost no aphids from the top.

However, I always found a few aphids hiding within a few florets, especially those within the tight center of each head. Our sprays and blasts didn’t seem to penetrate the top of the head well enough, and it wasn’t possible to spray or blast from underneath because of the stems and leaves in the way.

The soap plants had slightly more aphids than the water plants. I suspect this was because the water blast was stronger and reached inside the head better. The soapy water was not sprayed with nearly the velocity of the water blasting out of the hose.

I don’t think I’ll use a soapy water spray again since it wasn’t more effective than blasting with just water. But I’m unsatisfied with even a few aphids tucked into a head of broccoli or cauliflower because it discourages me from sharing my harvests with friends and family. For the next crop, I have a new experiment in mind.

In order to keep rabbits from eating these ‘Cheddar’ cauliflower and ‘Batavia’ broccoli plants when they were young, I had draped tulle fabric over them. When I removed the tulle — a week or so before we started our experiment — I noticed that there were no aphids on the plants. The plants had grown well under the tulle, which let through almost 100 percent of the sunlight, and so my next experiment will be leaving the tulle on the plants all the way until harvest.

What did the kids learn?

In addition to the lessons I noted above, the kids were introduced to the rudiments of the scientific method through this experiment even though I never explicitly mentioned the term to them. But when asked directly what they learned from our experiment, my six year old simply answered, “I learned that spraying soap kills aphids.”

Is killing aphids a good thing? To him it is because it makes his cauliflower more palatable.

The kids also got some photography experience out of it. They took most of the photos in this post, as I’d asked them to help “document” our experiment. Here is my favorite of theirs:

HERE is a more general post about dealing with aphids on broccoli and cauliflower.