Dwarf, Semi-dwarf, and Standard citrus trees: What are they, really? 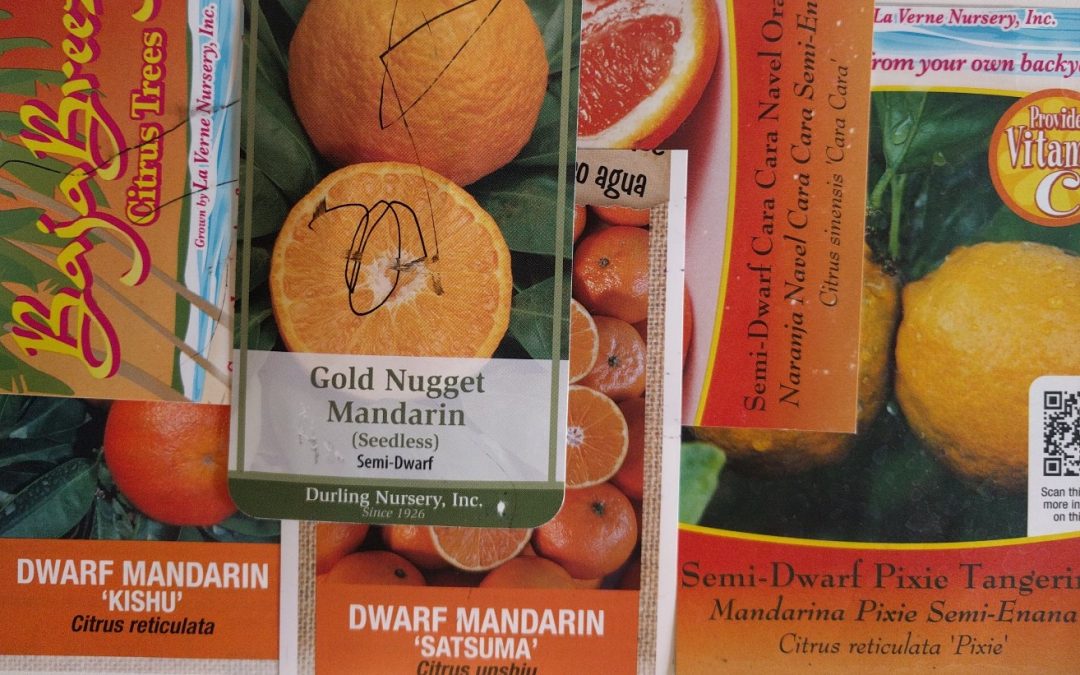 Back in 2014, I wanted to plant some citrus trees along the north side of my driveway. I knew the varieties I wanted, and I envisioned planting about five trees that would ultimately grow into a citrus hedge.

But the hedge couldn’t get too wide or it would choke the driveway and entangle in our neighbor’s fence. It also couldn’t get too tall or it would block our view of the mountains although since our driveway went downhill, the lower trees could get taller than the trees planted closer to the house.

So I had my design parameters laid out.

Then I went to buy the right trees. If you’ve shopped for a citrus tree recently, you know that they are always labeled with at least the two elements of variety and size. The variety might be Meyer lemon or Valencia orange or Rio Red grapefruit. And the size is usually described as dwarf, semi-dwarf, or standard. 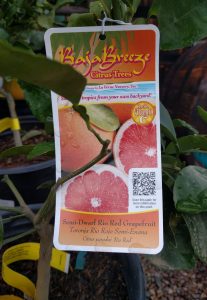 These two Cara Cara trees were grown by different nurseries, the dwarf by Durling and the semi-dwarf by La Verne. (Almost all citrus trees we buy in Southern California were grown by these two Southern California-based nurseries.) Maybe they just have different opinions of how tall dwarf is. The term is not regulated or standardized by the industry.

So what if we compare two different trees grown by the same nursery? Are they consistent in their use of the terms within the nursery? Another variety I wanted to plant along the driveway was a Kishu mandarin. (It is the best fruit tree for kids, as I wrote about here.) I found a Kishu grown by Durling and labeled dwarf. But the tag said it would only be 3-5 feet tall at maturity. Remember, the Cara Cara grown by Durling and labeled dwarf was said to reach 10 feet. One dwarf citrus tree will grow to 10 feet while another dwarf might get to 5 at most?

This made me think that I should pay more attention to the numbers on the tree tags rather than the terms dwarf, semi-dwarf, or standard. How big did the tags estimate the trees would eventually reach? Numbers are objective. Disregard that the Cara Cara tree is labeled dwarf; only consider that its tag says it will grow to 10 feet. Ten feet is 10 feet. Or is it?

How citrus trees are made, in two short paragraphs

Almost all citrus trees you can buy are made up of two parts: the roots part and the top part, the rootstock and the scion. Usually, a seed is planted and a tree grows up for a year or so. Then a piece, called a bud, of another citrus tree is put onto that seedling tree. If we want to make a Nordmann Nagami kumquat tree, then we take a bud from a Nordmann Nagami tree and stick it onto the trunk of the seedling tree. The bud starts to grow.

(You must always remove branches that grow from below this graft union, as I wrote about in this post.)

What affects the ultimate size of a citrus tree

So our citrus trees have two parts that affect how big they will grow: the rootstock (roots) and the scion (variety on top). As I already mentioned, different citrus varieties naturally grow to different sizes. Orange trees grow bigger than mandarin trees, rootstock influence notwithstanding.

But the rootstock a citrus tree has also influences how big it will grow, how dwarfed it will be. I had been under the impression that when a nursery labeled its citrus trees dwarf, semi-dwarf, or standard it was, at least in part, because they used various rootstocks that dwarfed the scion varieties more or less.

The varieties I ended up planting along my driveway were Satsuma, Kishu, and Gold Nugget mandarins, and a Cara Cara navel orange. So I called up the two nurseries that had grown my trees to ask what rootstocks they were on. (You can usually see which nursery grew your tree by reading the container, if it doesn’t say on the tree tag.)

I called Durling Nursery and asked which rootstock they used for mandarin trees labeled dwarf or semi-dwarf. “Trifoliate,” I was told. There are a few common trifoliates used, but one of the most common is Rubidoux trifoliate. And for trees labeled standard? “C-35.” The full name of that one is C-35 citrange.

Then I called La Verne Nursery and was told that they use C-35 for all of their citrus trees, whether labeled dwarf, semi-dwarf, or standard.

That was curious. Same rootstock making dwarf and standard trees. Then what warrants the difference in labeling?

La Verne’s website explains, “We grow two different forms: one being a dwarf/semi-dwarf (bush / large shrub) style, and standard form (tree branches at 30 inches from the ground).” So they’re not saying they grow different sizes. They grow different forms. A tree labeled dwarf has been pruned at the nursery to look like a bush while they have pruned the standard ones to look like a tree, with a trunk and no low branching.

Beyond scion and rootstock

That accounts for the tree as you buy it from a nursery: it’s got the genetics of a certain scion and rootstock. Beyond rootstock and scion, there are many more factors at play which affect the size and speed of growth of a given citrus tree, and which might make a tree seem to betray its labeling.

In ground or container

Four Winds Growers up in northern California has made citrus trees in containers their corner of the market, and on their website they explain that a citrus tree in a container might reach 10 feet maximum while the same tree in the ground will become twice that size.

On a similar note, soil depth and quality affect the growth rate and size of a citrus tree. In my own yard, I’ve got areas with deeper or shallower soil, as well as areas with rockier or richer soil. I’ve noticed citrus trees growing differently in each area.

A citrus tree might thrive and grow bigger in a hotter climate. Take the Gold Nugget mandarin, for example, which was bred by the University of California at Riverside. The University’s Gold Nugget Fact Sheet says, “Tree vigor varies somewhat by location. At southern desert locations (Coachella Valley) trees are quite vigorous with large canopy volumes. In contrast, at the cooler Santa Paula and Ojai (Ventura County) locations trees had significantly less canopy volume.” 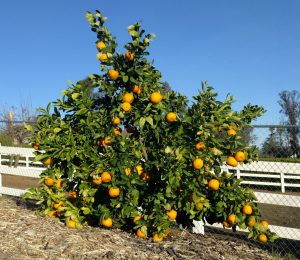 We can think of other factors that will affect a tree’s growth too. How well is the tree watered? How much energy has it spent on fruiting rather than growing leaves and branches? Has it been nipped back by frost? How much sun is it growing in?

All this goes to say that it’s complicated, and though I felt frustrated by the lack of consistent, clear answers to how big the citrus trees I was looking to buy would get, upon further learning I felt sympathetic.

How to estimate a citrus tree’s mature size

I still had to figure out which trees to plant where along my driveway back in 2014. I approached that by finding multiple size estimates for each variety, including the ones on the tree tags, then doing some averaging of them, and then throwing in considerations for my particular soil and climate situation. I think this is the best, most realistic approach any home gardener can take.

For example, the Durling tag on the Gold Nugget mandarin tree I bought said the tree size would be 6-8 feet. Four Winds Growers said their Gold Nuggets got 8-10 feet. That landed me at a middle ground of 8 feet. So I ended up planting my Gold Nugget 10 feet from neighboring trees.

Down near the bottom of my driveway I have a few avocados, and above them I started with the Cara Cara navel orange because I guessed it would grow up to about 12 feet, then the Gold Nugget mandarin, then a Kishu mandarin that I figured would top out a bit under eight feet. 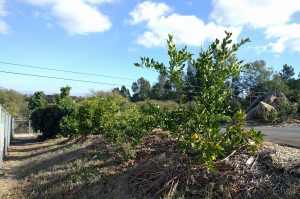 Just last year, I added another Kishu and a Satsuma mandarin, which I guessed would be smaller than the Kishu. But I might be proved wrong on this one. The Satsuma is already taller than the Kishu. Sure is exasperating trying to predict the growth of citrus trees! I keep my pruners at the ready.

When and how to prune citrus trees

When to pick oranges and tangerines