Gardening benefits of a hot-summer climate

Every August, I curse the summer. I grow tired of the heat and I wish I lived at the beach again. Last week, I wrote an email to the host of my favorite garden show asking for encouragement in this season of discomfort.

Don Shor hosts the Davis Garden Show alongside Lois Richter on KDRT in Davis, California. Davis gets even slightly hotter than we do here in the inland valleys of Southern California, having an average high of 93 degrees in August compared to my 91. But like me, Don has also gardened near the ocean. He grew up in La Jolla.

So I asked Don about the gardening benefits he has found in the hot summer climate of Davis compared to the mild maritime climate of La Jolla. I was hoping he could make me feel better about tolerating these toasty August afternoons, and he did.

For starters, he said that his tomato yields are much higher compared to La Jolla. The majority of the nation’s canning tomatoes are grown in the hot Central Valley, he noted. Also, his chile peppers are more flavorful, intense, pungent, and his plants have far fewer disease problems, such as powdery mildew, due to the very low humidity in Davis. 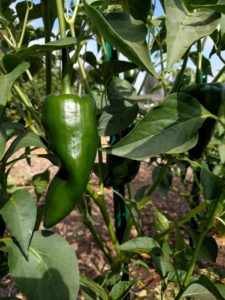 These poblanos have been both fruitful and flavorful for me this summer.

Along with increased summer heat often comes increased winter chill, as is the case of Davis compared to La Jolla. Because of this, Don also mentioned that he can now grow superior deciduous fruit trees. His dad planted an apple tree in his La Jolla yard — Beverly Hills variety. “Yeah, it was an apple,” said Don. “That’s about the best you can say about it.”

This reminded me of the apple trees I had when I lived close to the beach — Anna and Dorsett Golden varieties. They were apples. I can’t say that they had any taste to write home about though. Same with the plums I grew in that yard. They were plums.

Finally, Don said that a lot of the Mediterranean plants love the heat, plants like rosemary and lavender. I’ve found that to be true in my yard as well. Coincidentally, just yesterday I removed rosemary and lavender plants because they outgrew the space I had allotted to them. I was tired of trimming them back despite the fact that I never gave them a drop of water!

So, while all’s not perfect here — it’s often too hot in summer for personal comfort — this climate is clearly heavenly for some plants, as Don Shor points out. Next August, I’m hoping to remember that and complain about the heat less. In the near future, I’m also going to take advantage of the hot-summer climate gardening benefits and plant more peppers, more tomatoes, and more deciduous fruit trees.