I planted tomatoes too early 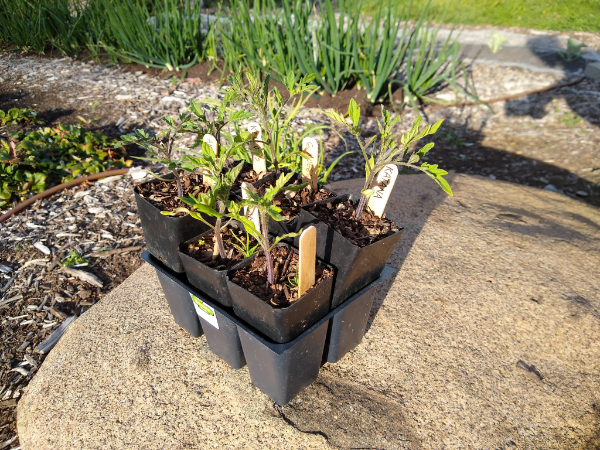 Here are my excuses:

It was mid-March, a planting time that had always worked for tomatoes in the past. I had sown seeds of seven varieties of tomatoes back on January 21, and the plants’ roots were nearly filling out the space in the modules — they were small but almost up to size. It was predicted to rain, and I love transplanting right before a rain because then I am relieved of follow-up handwatering duties. Sure, it had only been in the 50s and 60s for the previous two weeks, which was chillier than normal, but it was mid-March. I mean, it was mid-March.

Here is what happened:

After planting on March 14, the rain came through as predicted the next day. Then, to my surprise, the National Weather Service issued a Frost Advisory. Really? Should I cover those tomatoes tonight?

It was breezy and didn’t feel cold in the yard that evening so I chose not to. The next morning there was no frost and all was well.

That evening, March 16, also didn’t feel cold in the yard, but the air was still and the sky was clean of clouds. The National Weather Service issued no Frost Advisory, but before going to bed I read the Forecast Discussion where I found that the meteorologist mentioned the possibility of “patchy frost in inland valleys.” Whatever, I’m tired. I’m going to sleep.

Frost all over my baby tomatoes. My weather station bottomed out at 31 degrees; the nearby weather station that the National Weather Service uses dropped to 28, which they said broke the record for the lowest temperature on that day, the previous record of 29 having been set in 1975.

So there’s this guy who writes about growing food and sells a gardening calendar for Southern California. In his calendar, he says to plant tomatoes starting in March. In his website’s post about when to plant tomatoes, he’s more specific and says you’re safe from mid-March.

He even sounds a little cocky about his recommended planting dates, saying, “I am . . . 100% confident that you can rely on the information in this calendar.” And, “The sowing and planting dates that I list are the sure ones . . .”

But he does give this additional piece of advice: “It is nonetheless important to remember that plants don’t grow according to a calendar.” Oh yeah? Then what do they grow according to? “The weather,” he says, which “is different from year to year . . .”

I can lead myself to water, but I can’t make myself drink.

It’s been a couple days since that frosty morning, and it looks like nine out my twelve little tomato plants have been killed. Luckily, I hadn’t planted all of the tomatoes I’d grown. I kept a handful of extras in their module trays up near the house and they were unfazed by the record cold night. But I think I’m going to wait a couple weeks to put them in the ground, or more wisely, I’m going to wait until the weather forecast looks right.