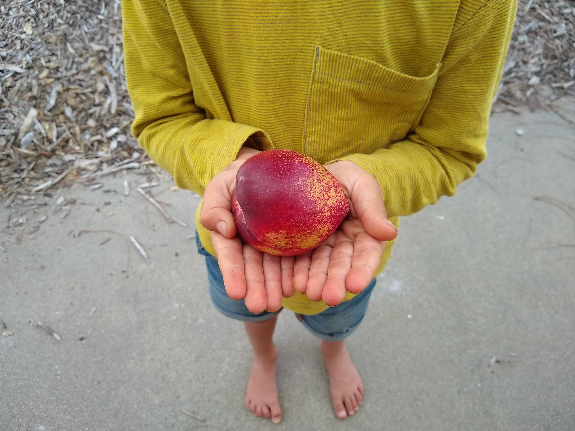 Gave my neighbor some Snow Queen nectarines from our tree the other day and she sent me this text: “Greg, those nectarines were by far the most delicious things we have had in our entire life.”

Now, my neighbor is really friendly, and maybe she just wanted to emphasize gratitude, but I was eating one the other day — juice dripping on my toes — and was also thinking, “These Snow Queens are out of this world right now! I have to write a profile post on this variety.”

This year, the Snow Queen harvest is peaking here in early to mid July, but this is slightly later than usual. Late June to early July is the usual.

In fact, I’ve got a few branches of Red Baron grafted onto my Snow Queen tree so you can easily see the difference in maturity between those two.

(See where the Snow Queen harvest fits in among many other deciduous fruit trees in the Dave Wilson Nursery Harvest Chart.)

Snow Queen bears attractive pink blossoms in the spring, but these do not match the showy double flowers of Red Baron (which open earlier than Snow Queen despite the Snow Queen fruit’s earlier maturity, oddly).

Snow Queen nectarine trees don’t need much chilly weather in the winter in order to flower and fruit well. My tree located in the foothills of San Diego County has performed fairly consistently over the past seven years. I’ve seen Snow Queen trees in warmer locations closer to the ocean fruiting well also. One nursery grower of Snow Queen trees lists the chill hours needed for this variety at 250, and most Southern California locations at least a couple miles away from the coast average that many or more.

However, I wasn’t convinced my Snow Queen was a keeper during its first couple years because many of its nectarines split on the young tree.

Now, in all years but those with the warmest and wackiest winters, my mature Snow Queen nectarine tree has been a reliable producer of unsplit, high-quality fruit.

(My tree is on Nemaguard rootstock, by the way.)

While the Blenheim apricot next to my Snow Queen nectarine gets some sunburn on its fruit if we have an early summer heat wave, the Snow Queens never do. Snow Queen seems like a tree that would possibly even suit a desert location.

On the other hand, Snow Queen fruit do tend to have some blemishes, primarily skin-deep blemishes. For example, they get bronze speckling that is sometimes so heavy as to be more like russeting. Fortunately, this doesn’t affect the fruit’s interior.

Like other nectarines, Snow Queens do get some scarring from Western flower thrips (Frankliniella occidentalis) — worse in some years, very little here in 2021. I don’t do anything to try to control this, as there is always enough fruit on the tree to just thin those with a lot of thrips scarring, as it is occasionally so bad as to deform fruit. (See the UC IPM page on Western flower thrips management on nectarines.)

I get a lot of doubles and spurs on my Snow Queen in some years, where two fruit grow connected near the stem. But again, because the tree is so productive I can usually thin these doubles and spurs and still have more wholesome fruit on each branch than it can handle so it’s not a significant problem.

(It is written in The Home Orchard that doubles and spurs are caused by high temperatures during the previous summer.)

When the background color of a Snow Queen nectarine turns from green to white, it’s ready to pick, and if you let it go all the way white, even cream colored, then it’s the juiciest piece of fruit you can ask for. It can be like biting into an extremely sweet water balloon.

But what I like about the sweetness of Snow Queen is that it always retains a bite, a tang in the background such that it’s not a bland sugariness. Snow Queen has a rich, rounded flavor.

(Stick your head into a Snow Queen tree and you can smell the same aroma.)

The interior of the fruit is nearly white, and the flesh comes off the seed pretty well. I’ll call it semi-freestone.

Snow Queen is not a new, untested nectarine variety. It was introduced half a century ago by Armstrong Nurseries of Ontario in San Bernardino County. (All of us in Southern California know Armstrong — none of us live far from an Armstrong Garden Center today.)

Snow Queen has proven itself worth growing in my yard and in many other yards in our region. As with any variety, Snow Queen is not perfect, but I appreciate my tree more as the years pass. As do my neighbors.