The Bearss lime tree: a profile 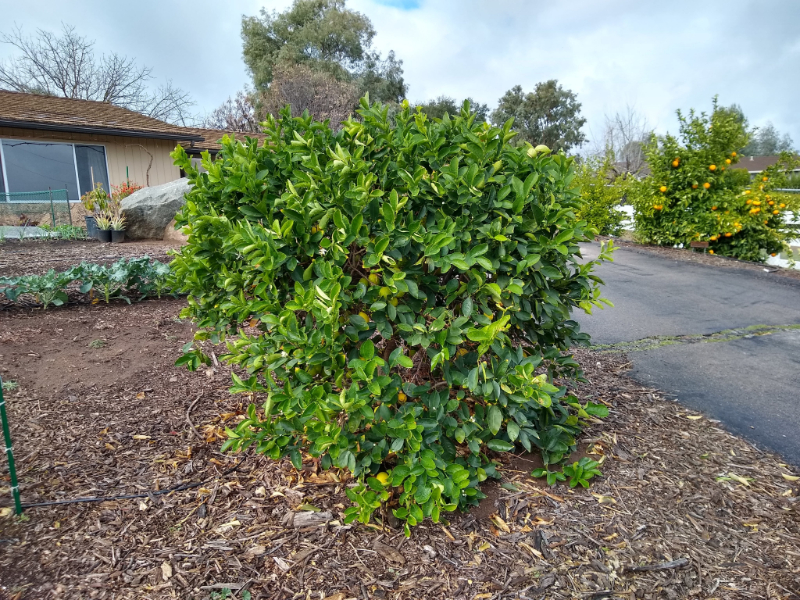 My wife came home with some limes from the grocery store one day nine years ago and I said, “We shouldn’t be buying those. I can grow those.”

That’s how I ended up planting our Bearss lime tree back in 2012.

In this profile, I’ll tell you a bit more about my own tree and about Bearss limes and trees in general, the goal being threefold: to help you decide whether it’s a good tree to add in your yard; to give you some background and context on the variety if you have it already; and, for those who recently purchased a house with unknown citrus trees in the yard, to help you identify whether one of them is a Bearss lime.

What kind of lime is a Bearss lime? It can get almost as big as a lemon.

Bearss limes are distinguished from the other main kind of lime grown in California called the Mexican, West Indian, or Key lime. These are also known as Bartender’s limes. They are much smaller, rounder, and they’re usually seedy. (See the page for Mexican lime at U.C. Riverside’s Citrus Variety Collection.)

Bearss limes go from green to light green on the peel once they’re mature.

Many limes are dropping from my tree right now, late January. Winter is when Bearss lime trees usually have the most fruit ready to pick; however, since the tree blooms a little throughout the year, there are at least a few limes ready to be picked almost year-round.

When I bought my Bearss lime tree in 2012 I knew that I would keep it pruned small. I grew up around citrus trees and saw that really, only one family per neighborhood should grow a lime or lemon tree. No single family can use a large lime or lemon tree’s full crop. But if I kept my lime pruned small, I figured we could get the amount of limes our family needed and no more.

I was wrong. I have kept the tree pruned down to shoulder height, yet it still makes more limes than we can use.

When I prune my tree I shear it. (The smell of the chopped leaves is wonderful!) There is no thought involved as to where to cut a branch. Because of that, and because the tree is so short, my children — including my three-year-old daughter above — usually help me prune.

I cut it back in size about twice each year, once here in late winter and again sometime in summer.

My tree looks more like a bush because of my pruning, but an unpruned Bearss lime tree has the “wild hair” branches that citrus trees often get, and it grows up to 10, 12, even 15 feet.

Bearss lime trees have thorns but the thorns are small.

The leaves of a Bearss lime are large like the leaves of an orange tree, but the edges of the Bearss leaves are deeper lobed.

Lime trees in general are more sensitive to cold temperatures than orange trees. A couple times, the new growth on my Bearss lime tree has been frosted back by nights in the mid-20s. But such temperatures never affected fruit nor older leaves or branches. On those same nights, the fruit and older leaves and branches of some nearby avocado trees were damaged.

It makes sense that Bearss lime trees aren’t as tender as the avocados in the cold considering where Bearss originated. According to Robert W. Hodgson in The Citrus Industry, Volume 1, Bearss started in 1895 in the Central Valley town of Porterville where a nurseryman named T.J. Bearss grew the original seedling. The tree may have been grown from a seed from a lime of Tahitian origin.

The Bearss lime is sometimes called a Tahiti lime. Hodgson explains: “The name Tahiti arises from the fact that this type of lime was introduced in California from Tahiti sometime during the period of 1850 to 1880.”

Let me complicate things with one other name. So the Tahiti is a type of lime whose botanical name is Citrus latifolia, and the Bearss lime is one cultivated variety of this type. However, this type of lime is also sometimes called Persian. Why Persian? Hodgson again: “The origin of the name Persian is unknown, however, although it seems likely that this fruit came to the Mediterranean area via Persia.”

All limes “are believed to have originated in northeastern India, adjoining portions of Burma, or northern Malaysia and to have followed the same general path westward to the Mediterranean basin and thence to the Western Hemisphere.” (The Citrus Industry, Volume 1.)

Anyway, these Persian or Tahitian types of limes have been grown in California for a long time and they are the standard lime for our region. The original 1954 edition of the Sunset Western Garden Book only lists Bearss as a recommended variety of lime to grow in California.

Is a Bearss lime tree a good fit for your yard?

I can’t imagine being dissatisfied with a Bearss lime tree unless you wanted the small Mexican/Key limes for specific uses and didn’t have space for both trees.

As I mentioned earlier, I planted our Bearss so my wife didn’t have to buy limes. But nowadays, I use more limes than she does. Because they are at hand and abundant, I’ve grown to love their smell and taste, and I’ve found new uses for them. I add lime juice to salsas. As a snack, the kids and I slice limes in half to lick. I squeeze some lime juice in a bowl of water to use to wipe down the kitchen counter, and my desk, and the interior of our cars. I make salads of cabbage, avocado slices, and a lime squeezed over the top.

Oh, and the bees sure make use of the Bearss lime’s blossoms in winter, as they are one of the earliest blooming citrus in our yard.

No wonder Bearss has been the standard California lime for over a century.