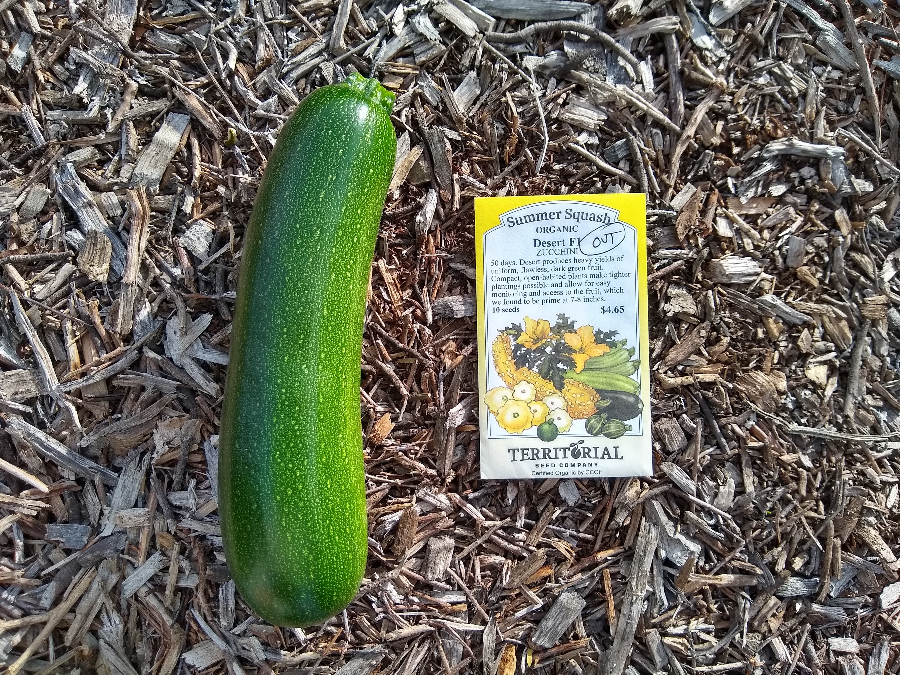 Yesterday, I picked a picture-perfect zucchini from a plant that I grew from seed way back on March 1. Have you ever known a zucchini plant to remain productive all through spring, through summer, and well into the fall?

This is extraordinary. Let me briefly recount the plant’s life, and then let’s make some guesses as to why it has had such longevity. This may give us clues for growing happy plants of any type.

In the spring, I ran an experiment comparing seed-starting mixes, and this zucchini plant came from one of the seeds that I sowed for that experiment on March 1.

The variety I sowed is called Desert, purchased from Territorial Seed Company in Oregon. It’s a variety I’ve grown for a few years, and it has performed well each time.

Because zucchini plants grow so large, I often place them under the canopy edge of fruit trees rather than within my vegetable garden beds. So I planted this seedling near a Reed avocado tree on April 9.

We soon began harvesting zucchini fruit from the plant, but assuming that it would decline in late spring or early summer I sowed seeds for its replacement on June 3. But on June 17, the plant was still doing great.

I still planted a Desert zucchini seedling on June 24, only to remove it after a few weeks because no family can handle more than one productive zucchini plant.

In fact, at the end of July we left town for a week, and you know what happens when you don’t pick zucchini for a week. You return to this:

The plant would surely decline in late summer, I thought, so I again sowed seeds for a replacement on August 24 to make sure that we would have zucchini into the fall, but when the new seedling was big enough to plant I found that the first plant was still going strong so I just tossed that seedling into the compost.

Then summer was over and the plant was still flowering and fruiting, and I began to recognize it as extraordinary. It’s almost Thanksgiving now, and the plant continues to give consistent and impeccable produce:

Why the great performance and longevity?

Now I want to know why. What does a zucchini plant need to be healthy and fruitful for months on end?

Water. My irrigation of the plant must have been satisfactory. I have the plant on drippers. There are two, nine inches apart, each emitting 0.5 gallons per hour. During the summer, I ran the drippers two or three times per week, for about 10 hours per week total, giving the plant about 10 gallons per week.

The site of the planting is in full sun. Despite being near the avocado tree (and near a small orange tree), the plant receives unimpeded sunlight for most of the day, even now that the sun is low in the southern sky. Most plants grow best and strongest when they get full sun.

The dirt around the plant is deep — at least two feet deep — and apparently fertile. While I have never added fertilizer here, I have had the area covered in a minimum of three inches of wood chips all year long for about seven years now. That can engender fertility.

This spot has never been planted with zucchini before. This makes it less likely for soil-borne pests and pathogens that attack zucchini to be numerous here. Zucchini is susceptible to root-knot nematodes, for instance, but obviously they do not inhabit the soil in this part of my yard.

This spot has been planted with many flowers over the years, including sunflowers, snapdragons, gaillardia, and cilantro (that I let go to flower). As you know, flowers feed insects that also feed on vegetable pests. I didn’t notice any aphids on this zucchini plant at any point in the year. It’s possible that predators of aphids such as syrphid flies and lady bugs have become numerous in the area because of the flowers I provide for them, and they kept the aphid numbers very low.

But my location is twenty miles from the ocean and I rarely see powdery mildew on any of my plants. Therefore, the lack of powdery mildew on my zucchini is probably mostly due to the inhospitability of my environment to that disease although Desert zucchini is said to have some resistance to powdery mildew so the choice of variety may have also helped here.

I don’t spray anything in my yard, but with this zucchini plant I never even bothered removing old leaves, as I sometimes do with zucchini plants in order to make them at least look healthier. With this one I have just let the old leaves degrade naturally and be munched by bugs. This doesn’t seem to have had any negative effects.

I didn’t do anything extraordinary to deserve this extraordinary zucchini plant. It’s mostly luck. Sometimes these plants just happen, like my tall dinosaur kale plant did. Nonetheless, I think we can make some good gardening choices to help them happen more often.

Thank you for the SUPPORT!